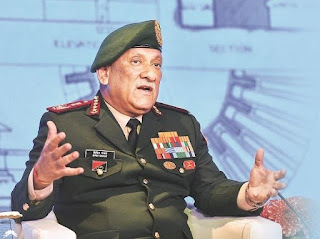 Just days after a top ministry of defence (MoD) official in New Delhi warned of sharp cuts in the defence allocations for 2020-21, the Chief of Defence Staff (CDS), General Bipin Rawat, said the military should not be “misrepresenting its requirements” in order to “go in for large amounts of [weapons] imports.”

Implicitly backing the government’s cuts on defence expenditure, Rawat said in Delhi on Saturday that military planners should stop pretending that India’s military was playing a global role. Given the military’s limited role, indigenously produced weapons were adequate, said Rawat.

“We are not expeditionary forces that have to deploy around the globe. We have to guard and fight only along our borders and, of course, dominate the Indian Ocean Region (IOR). So we should not go in for larger amounts of imports by misrepresenting our operational requirements,” stated the CDS.

Instead of imports, Rawat said the military should boost the “Make in India” initiative by using indigenously developed weapons, even if those met just 70 per cent of the specifications the military ideally required. He said that, given an opportunity, India’s defence industrial base would learn to build world-class equipment, incorporating cutting-edge technologies.

Rawat’s remarks have been greeted with shock in military social media chat-groups. There is dismay at the suggestion that the military has been importing equipment under false pretences, and at the exhortation to go into combat with “inferior” weaponry.

Rawat has indeed departed from two central tenets embraced by successive military chiefs: First, the operating assumption that India is an Indo-Pacific regional power, not just a local actor; and second, that the army, navy and air force must never be technologically overmatched by an enemy. It has always been assumed that, if indigenous weaponry were inferior, the government would import what was needed from the global arms market.

The erosion of the military budget by the Covid-19 pandemic is evoking radical concerns, similar to Rawat’s, from retired service chiefs as well. Admiral Arun Prakash (Retired), one of India’s most widely respected navy chiefs, cautioned on Thursday that budget cuts meant that India could no longer afford enmity with both China and Pakistan.

Stating that New Delhi should do what it takes to mend fences with Beijing, Prakash said: “We just cannot handle two fronts. If you have two enemies make peace with one… It’s time to think like Chanakya and make peace on one front… Pakistan is only a puppet of China. China is the main adversary and it would make sense to come to terms with China.”

On the other hand, China’s growing presence in the Indian Ocean is now “a far more challenging issue… the Chinese are on the up and they are going to appear here in strength,” he said.

In a separate interview on Thursday, the navy’s vice chief, Vice Admiral Ashok Kumar described a heavily engaged navy, which had warships continuously at sea for months, and unable to enter ports for fear of the Covid-19 contagion.

In addition to five naval vessels deployed for repatriating Indian citizens from West Asia, naval warships are engaged in anti-piracy patrols off the Gulf of Aden and the Strait of Hormuz, monitoring the Strait of Malacca, and patrolling India’s exclusive economic zone off the Maldives, said Kumar.

The vice chief also pointed to an increased number of reconnaissance flights by P-8I Poseidon aircraft to monitor the Indian Ocean and by Dornier 228 aircraft and unmanned aerial vehicles (UAVs) to monitor coastal security,

Reflecting a belief shared by numerous serving personnel, Prakash said the armed forces could have done much more to help out-of-work labourers who are migrating to their villages, many on foot. He said the armed forces have “deep resources and organisation and all that is needed is for the government to call on them to assist “citizens of India in distress.”

A senior general in the army’s logistics branch told Business Standard that the army alone has 68,000 lorries and more than 5,000 functional cookhouses across the country and could have played a major role in easing the migration of labourers and their families to their villages.
Posted by Broadsword at 09:26

The generals talking about arnys lorrys and cookhouses want to reward lazy migrants who are now spreading disease in the rural land by running from cities! The lockdown was for exactly this reason.

What about the RAFALES. Can we afford them any longer....and the air craft carrier fleet.

The right thinking. 2020 we save . Then we think about fighting wars

An infantry non technical dumbwit , with no strategic thinking , foolishly parroting the lines which babus have written , scripted and handed over to a mathu from uttrakhand hills good enough to carry backload in hills .A disaster for navy and airforce to have a
unqualified CDS .