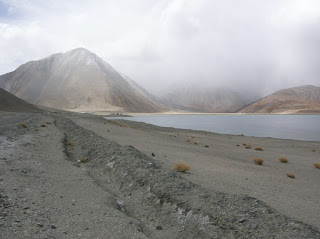 After New Delhi on Friday rejected US President Donald Trump’s claim that he had discussed the Chinese intrusion across the Line of Actual Control (LAC) with Prime Minister Narendra Modi, the government stated that Defence Minister Rajnath Singh had spoken with his American counterpart, Defence Secretary Mark Esper.

Besides discussing the Covid-19 pandemic, “They reviewed progress on various bilateral defence cooperation arrangements and expressed their commitment to further promote our defence partnership,” stated a defence ministry release.

Two days after the Chinese foreign minister stated on Wednesday that the “Border areas situation is overall stable and controllable,” government sources reported and satellite photos confirmed that the PLA was constructing concrete bunkers at four places in Galwan, especially Gogra Top; and on India’s side of the LAC on the North bank of the Pangong Tso.

It is also being reported that the Chinese are busy extending roads across the LAC to Gogra in the Galwan valley, a distance of about 2.5 kilometres.

In addition, PLA troops have completed a road on the Pangong Tso north bank from Finger 5 to Finger 8, a distance of about 3 kilometres.

All this has been done over the last two weeks, in the same manner as the PLA took just two weeks in October 1962 to extend a road over the LAC to Tawang, after capturing that border town.

Even more worrisome, the PLA has moved armoured vehicles and artillery guns to the LAC, close to their intrusion points, enabling fire support to be provided to their troops that  had crossed the LAC.

There are now about 18 guns in support of the Chinese troops at Pangong Tso, and about 12 guns supporting PLA troops in the Galwan valley.

To contain the threat from the Galwan valley to the tactically important Darbuk-Shyok-Daulat Beg Oldi (DSDBO) road, Indian infantry troops have taken up positions to block further ingress by the PLA.

However, there is no action to evict the intruders, nor any deployment of Indian tanks to guard against just such an eventuality.

Nor is there any deployment of troops from the mountain strike corps that the army created at a cost of some Rs 70,000 crore, purely to act as a deterrent against Chinese intrusions.

Instead, New Delhi stated: “India is committed to the objective of maintenance of peace and tranquillity in the border areas with China and our armed forces scrupulously follow the consensus reached by our leaders and the guidance provided.  At the same time, we remain firm in our resolve to ensuring India’s sovereignty and national security.”
Posted by Broadsword at 08:10

Col. Shukla, why can't you post some imageries from Indian or foreign resources to buttress your writings?

If what you are writing is true, then areas are already lost like the lands in Doklam by Bhutan and India...

Too sad to read but need some proof to make Indian Army to take action...

Thanks for information from time to time.

People really don't know what is truth or new normal will be what is dished out by govt and supporters.

On other hand Jeff Smith in his tweet said this:

"UPDATE on the China-India border standoff. I've seen some commercial satellite images supporting what @Iyervval and others have claimed: save for a small ingress near the Galwan river—from which they were evicted mid-month—the PLA isn't camped anywhere on India's side of the LAC."

the tone of your article is somewhat panicky whereas for Doklam it was more measured. there it took 73 days to come to some understanding. here too it will take time. both sides troops are face to face and this can't be forever that a brigade is facing each other permanently. no one knows what's really happening on the ground but yeah we were as usual caught off guard. so nothing has changed since Kargil!! The PM, RM must invest time and resources to these border disputes rather than delegate completely to the NSA. we have so many mechanisms not sure if they are working at all.

Just face it - there is nothing India can do. Doesn't matter what government is in charge.
Only a country like the US or Russia can really threaten China.


A VERY INFORMATIVE ARTICLE BROADSWORD
IS THE FOLLOWING CORRECT?
1. We build a road to the DBO this opening the gates to Akshai Chin
2. China deploys it’s troops at Gulwan in a position to cut the Shyok Road
3. We deploy an armoured brigade in the area.
4. The Chinese move their positions closer to the LAC at Gulwan
5. We move a second brigade to reinforce the border defence in the Chusul area
6. China now moves thousands of troops occupying some areas they perceive as theirs.
7. China builds defences at Gulwan beyond the LAC

Why did we spend millions of dollars building the road to DBO?? which is to a worthless desert, when we know given China is an economic superpower, we have no hope in hell of getting Akshai Chin back.
We already spend millions over decades and lose lives over a worthless area of ice called Shichin.

WE ARE IN COMPETITION IN BUILDING INFRASTRUCTURE WITH AN ECONOMIC SUPERPOWER WHICH COULD RUN TO MANY HUNDREDS OF MILLION DOLLARS.

All the while
1. 40% of Indian children have stunted growth due to malnutrition.
2. 60% of Indian women are anemic.
3. We have a huge demographic bulge, with no jobs for our increasing under 35 population
4. Our education system is so dismal that even if our youth were to be employed we would have the lowest productivity rate in the world.

5. If we cannot even properly organise a few dozen trains getting migrants home, we will never be able to organise our population into a war effort to fight any war.

FOOLISH PATRIOTISM, AS TAUGHT BY RSS HQ AT NAGPUR WILL BE OUR DOOM.

Are you saying there is no build on the Indian side, or there is build up but that is not good enough because the mountain corps are not involved?

It is my opinion that both the Indian army and the honchos at Delhi have failed to understand the psyche that informs the decision making at the CCP. The incursions and backtracking in the past where we came away nursing grievances but were otherwise none the worse off should not have been misconstrued as inability to press harder. Till this day the Chinese follow the teachings of Sun Tzu religiously with the only difference being that the art of War has been adapted to Modern Warfare. Unlike much of the west that still believe in grand posturing to assert dominance, it is very much part of Sun Tzu's way to hide one's true motives and ability to coax the enemy into complacency. The harder the strike will then be when it comes without warning. I fear that while China has stuck ti the wisdom of their sages we have let Chanakya diminish into a cheap political artifice. Such is the tragedy.

State funded media outlets like WION have also contributed to the mess by humiliating China inordinately. Quite a miscalculation if they knew that the new China, after the humiliations they faced during the Sino-Japanese wars and subsequent western imperialist interference, is in no mood for any further debasement. When the Chinese official stated that India's pride will not be allowed to be hurt one can conclude that the motive is just that-to humiliate us. Any decision hereon from our side will need equal parts sagacity and equal parts courage. One can only hope that a Chanakya will emerge or else we will have lost both face and territory when the smoke finally clears.

I don't know of any other country on this planet who would politicize occupation of their lands.

All the "sarfaroshi ki tamanna" (fervour for sacrifice for country) and similar nationalistic passions are reserved for fighting against Pakistan and dog whistling over Muslims.

As for China, it can take ownership of as much land as it wishes, and India can oblige them by being a mute spectator.

What is the source of your information that you share? If it is from open sources then should you not cite them and acknowledge them? If you have independent sources within the Ministry of Defense and/or the armed forces then I must say you are an extremely dangerous man! The forces and the Ministry would be well advised to secure the leaks