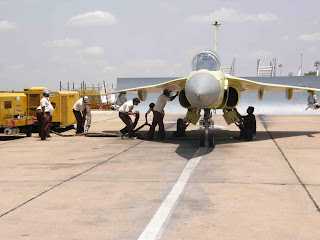 Hindustan Aeronautics Ltd (HAL) announced on Monday the payment of interim dividend of Rs 33.25 per share, entailing a payout of around Rs 1,000 crore, mainly to the government.

HAL is also poised to scale another summit this year, with its operational turnover for 2019-20 on track to exceed Rs 20,000 crore – for the first time ever.

However, HAL has to take a bank loan to pay its interim dividend. That is because its finances are deep in the red due to huge unpaid dues from the Indian Air Force (IAF), by far HAL’s biggest customer.

Business Standard learns the IAF’s outstanding dues, which are for aircraft and services already delivered, is likely to be around Rs 17,000 crore – only a little less than its entire year’s turnover.

Contacted for comments, the IAF did not respond. However, senior air force officials, speaking on condition of anonymity, argued that the outstanding dues to HAL are not more than Rs 13,600 crore. Furthermore, say the IAF planners, it is the defence and finance ministries that are holding up payments to HAL. 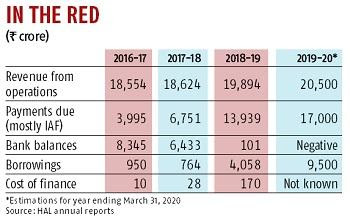 With HAL lacking money for day-to-day production, design and development, and even to pay salaries of employees, the once cash-rich defence public sector undertaking (DPSU) has had to turn to the banks for loans. HAL’s last two annual reports paint a picture of financial decline: Bank balances dropped from Rs 8,345 crore in 2016-17, to Rs 6,433 in 2017-18, to Rs 101 crore last year. This year, it will be in the negative.

Meanwhile, borrowings have steadily risen. HAL’s annual reports reflect borrowings of Rs 950 crore in 2016-17, which dipped slightly to Rs 764 crore the next year, before zooming to Rs 4,058 crore in 2018-19. This year, HAL is learnt to have already borrowed over Rs 8,000 crore and this is on course to rise by another Rs 1,500 crore for running expenses and dividend payouts.

For the coming year, the IAF has again been allocated 40.5 per cent of the services capital allocation, amounting to Rs 43,282 crore.

The company’s Annual Report for 2018-19 takes note of the outstanding dues, but states in its “Significant Accounting Policies” that: “Debts from Government departments are generally treated as fully recoverable and hence the Company does not recognize credit risk of such financial assets. Impairment on account of expected credit loss is being assessed on a case to case basis in respect of dues outstanding for a significant period of time.”

Even if the IAF’s debts are fully recoverable, there are significant financial penalties that HAL is paying as a result of its disrupted cash flows. Prior to 2015, HAL’s hefty cash reserves generated income for the company. Today, its balance sheet reflects a growing “cost of finance”: Rs 10 crore in 2016-17, Rs 28 crore in 2017-18, Rs 170 crore in 2018-19 and, apparently, an even larger figure in the current financial year.

It is unclear what HAL’s board is doing to deal with this now endemic problem. A decade ago, the DPSU would have encountered no enquiries, since it was wholly government-owned. Now, however, with disinvestment having placed shareholding partially in public hands, the board is responsible for protecting the financial interests of public shareholders.

HAL has not responded to queries from Business Standard.

HAL: In the Red

All capital expenses are handled by MoD. That includes Budget planning.
These guys routinely override recommendations of Armed forces, look at MMRCA, could not close contact.
Same with KA-226 , not through yet, when IAF desperately needs light helicopters.

Why do you bring IAF into it ?

Could you make a video , or write an account of your understanding of the Rifled vs Smooth bore debate on the Arjun tank's gun ? The awkwardness of justifying the rifled barrel in the face of smooth guns being adopted the world over . Is it based on our enemy's ability of engaging us at some distance with regular munitions, which needs to be responded to with regular and inexpensive munitions ?

exactly how many birds have HAL delivered to explain the increase in their revenues? why is this missing in your detailed analysis? we need to know how many fighters and helos they have delivered in the last 3 to 4 years. as far as I know the rate at which Su-30mki and ALH are delivered are pretty stable over the years so how is it they are having higher revenues?