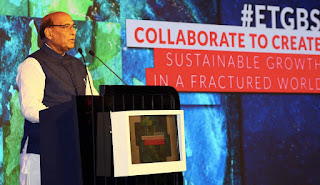 Infrastructure, skilling, access to funds— these fundamentals need to be fixed first for India to achieve its aerospace targets

Addressing an industry gathering in New Delhi last Saturday, Defence Minister Rajnath Singh recited a series of targets from the Defence Production Policy of 2018 (DPrP-2018). He urged the private sector to boost annual defence production to $26 billion by 2025, which would allow overall manufacturing to rise to $1 trillion that year and facilitate the government’s vision of making India a $5 trillion economy by 2024. Mr Singh also laid down an ambitious new target, stating that the government aimed to double the size of the aeronautics industry from Rs 30,000 crore to Rs 60,000 crore by 2024, through measures such as encouraging the global aerospace industry to source aero components from India. Describing micro, small and medium enterprises (MSMEs) as “silent performers,” the defence minister stated that efforts were being made to double their numbers in aerospace and defence (A&D) from 8,000 to 16,000 firms.

First, some context. Of the current annual aerospace production of Rs 30,000 crore that Mr Singh cited, just one behemoth – Hindustan Aeronautics Ltd (HAL) – accounts for over Rs 20,000 crore. The remaining one-third consists of offset related production by biggies like the Tata and Mahindra groups, and the export related production of aerospace components by a host of MSMEs, which have, by dint of meeting demanding international benchmarks of high-quality production and on-time delivery, embedded themselves into the global supply chains of industry leaders such as Boeing, Airbus, Lockheed Martin, Bell Helicopters and others.

There are structural and functional limitations to how much HAL can realistically expand production, given that it is genetically a builder of aircraft – both foreign and indigenous – for the Indian military. Defence capital allocations are growing in single digits and, therefore, it should be no surprise that HAL’s turnover is also growing in the mid-single digits: 7.8 per cent in 2018-19 and barely 4 per cent this year. Further tempering expectations from HAL should be recognition of the fact that its Sukhoi-30MKI production line in Nashik, for long the company’s cash cow, will come next year to the end of its order of 222 fighters. It was hoped that Sukhoi-30 production would be followed by an order for building 126 medium multi-role combat aircraft (MMRCA). Instead, New Delhi bought 36 Rafale fighters that will be fully built in France. Nor is there any sign of life in the Indian Air Force (IAF) procurement of 114 medium fighters or the navy’s acquisition of 57 carrier deck based fighters. All recent aircraft inducted – such as the C-130 Super Hercules and C-17 transporters, Boeing P-8I Poseidon maritime aircraft, or Apache, Chinook and MH-60R helicopters – have been procured in flyaway condition from America, notwithstanding the rhetoric of co-development and co-production between these “comprehensive global strategic partners.” Nor have any production orders emerged out of the defence ministry’s endless rhetoric about the military’s need for more unmanned aerial vehicles. HAL, therefore, can take solace only from likely orders for the Tejas fighter and the production of a large numbers of helicopters: the Russian Kamov-226T, the indigenous Dhruv and Rudra choppers that are already in service, and the Light Combat Helicopter and Light Utility Helicopter that are both on the cusp of operational clearance. In the circumstances, HAL will require unstinting support to grow at anything more than the low single digits in the coming years.

Therefore, meeting the aerospace production target of Rs 60,000 crore would have to come through MSMEs that are manufacturing for the global supply chains of the large “original equipment manufacturers” (OEMs). To support these firms and enable their growth, the government – across key ministries – must keep a few things in mind.

First, it must recognize that our firms competing for global orders are up against rivals that are being supported by their home governments with tax and export incentives and infrastructure that almost invariably surpasses India’s. Our government must provide its aerospace firms with a level playing field, if not a competitive advantage. The greatest deterrent to growth our companies face is the high cost of capital and lack of access to funds. In several cases, Indian MSMEs have had to turn down offers to build components and assemblies for global OEM supply chains simply because the cost of capital to create the shop floor and train the personnel was too high. This resulted in a loss of business and a missed opportunity for creating jobs and skills. To overcome this, the government could create a sector specific “A&D Fund” to provide low cost capital quickly to enable our MSMEs to grab fleeting business opportunities.

If the government is serious about doubling aerospace manufacture, it must include MSMEs in business delegations that senior ministers take abroad. These MSMEs must be introduced to overseas OEMs, with the tacit assurance that New Delhi backs its companies. Simultaneously, the government must incentivize global OEMs with tax incentives for working with Indian MSMEs. It would be worth considering whether to enlarge the definition of an MSME; Rs 10 crore worth in plant and machinery is no longer in consonance with the times.

Second, the government must transform the “people landscape” by shifting the skilling emphasis from quantity (numbers put through training) to quality (ability imparted). For this, the All India Council for Technical Education (AICTE) must allow industry participation in creating pedagogy, curriculum and training infrastructure in consonance with industry needs. Already, several companies run their own training curricula; the government must recognize these programmes as valid academic qualifications for career advancement. Additionally, the government must evangelize the creation of intellectual property (IP), patents and inventions, for which it must create a legal IP protection system on par with global standards. Finally, global OEMs must be encouraged to invest in the A&D learning space, with offset credits granted for investments in A&D learning in proportion to the number of workers the OEM hires from its own programmes.

Third, as exemplified dramatically by the ongoing Coronavirus pandemic, a safe and conducive business environment fundamentally shapes outcomes. Even if India successfully navigates the on-going stock market meltdown and mid-term degradation of global supply chains, our international businessmen are facing the consequences of our shift away from liberal democracy. One of our leading A&D entrepreneurs who regularly travels to the US and UK recounts the wariness that now mars casual interactions with the locals. “We always thought you Indians were like us; what’s happened to you guys?” he was asked. Such apprehensions are exacerbated by the snubbing of industry leaders like Jeff Bezos, who the government shunned during his recent trip to Delhi, apparently because his newspaper, Washington Post, had criticized the government.

Businessmen do indeed follow the money, but they also like to combine business with pleasure. It is no accident that Seattle – one of America’s most livable cities – is the centre of that country’s aerospace industry. Similarly, foreign businessmen are attracted to Bengaluru by that city’s easy culture. By that token, there is unlikely to be much international interest in the government’s A&D corridor in Uttar Pradesh, which the defence ministry is talking up. Mr Singh’s aerospace production targets ignore the limitations that abound: abysmal infrastructure, negligible law and order, a vicious social environment, lack of skills, poor access to funds and cumbersome compliance requirements. There is an urgent need to set these fundamentals right first.
Posted by Broadsword at 06:26

Hmmm, Aerospace is not a monolith.

Design and development of airframe and engines - the core of any aircraft are very niche and hard to master technologies. Barring a miracle of mythical proportions India won't do it on its own. No amount of tech dope by LCA and Kaveri enthusiasts will change that. Israel couldn't hack it. China' s still struggling with the engines despite massive amounts of industrial espionage and Russian contract science

India has to go in for a consortium approach with a Germany, Japan, Korea or equivalent for this to be a viable goal not a never ending science experiment

Avionics and Radar. Avionics is doable. Radar is a real stretch and when plug and play is available from third party vendors it is better to take a jv route to increase tech capes

Weaponry: Should be treated as a system integration challenge and not an aerospace mandate. Air Brahmos and LCH program philosophy is the way to go.

Manufacturing- The ancillaries and offset manufacturing companies need the roadblocks mentioned to be removed and can scale, no problem

The Indian Elephant in the Room: From inception to induction an aircraft is
primarily a program management exercise. When poorly managed look no further than the JSF/F-35 program when poor project management in the early years almost wrecked a program in a country with all the aerospace ingredients for success.

The completely dysfunctional de facto IAF-ADA-HAL program management that isn't with silos, differing cultures and agendas has to be smashed. Cadre of all three orgs need to be integrated into a special program framework with specific aircraft as deliverables much like the IGMDP except that was only DRDO and part of the reason why it wasn't more of a success. HAL's production lines have to be disinvested to private players with credentials not cronies of the ruling party


Unfortunately when even the IITian RM, now deceased could not deliver it fat chance Mr Muh Tod Jawab will deliver it. So we are condemned to only rhetoric .

Is the Rafael for the IAF ? Can an Indian fly a plane or a fighter jet ?

The IAF was almost wiped out by the PAF,in the 1965 war - but the PAF had a pre-emptive strike,so we can ignore it.

Let us also ignore the multiple air crashes of the IAF,in the Indian Heartland,and the Sino-Indian Border !

Let us look at History !

The Hindoo Hero,Man God,Hero God is RAMA ! As per the Valmiki Ramayana,his wife Sita,was kidnapped by the King of Lanka (a strategic ally of PRC),and loaded onto to a aero-vehicle and taken to Lanka

Rama the Man God neither saved his wife,nor heard her cries for help.

Rama the Man God could not get a plane,to intercept or rescue his wife - for 12 YEARS.

Rama the Man God,was roaming the jungles for 12 YEARS WITH APES AND BABOONS,trying to make an army to go to Lanka !

PLA is to note that Rama the Man God used Apes,to make a bridge to Lanka,and also,to fight the Lankans.RAMA KNEW
THE WORTH OF THE INDIANS - and so,he USED APES.

HOW CAN THESE PEOPLE FLY RAFAELS OR RUN NUKE SUBS ? They are the offsrping of Rama !

What did Seeta say of Rama ? She called him an impoteny pansy !

“What my father, the king of Mithila belonging to the country of Videha, think of himself having got as so-in-law you, a woman having the form of a man?”

The IAF and Army are the offsprings of Rana !

Indians do NOT realise,that the monkeys of Rama,cannot fight a war in Ladakh, for 5 reasons

The PLAF and PLN will destroy the IAFand the Indian Navy