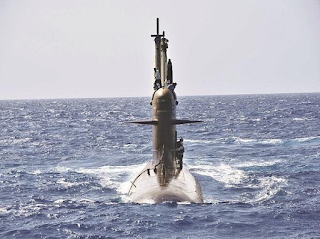 The state-of-the-art “air independent propulsion” (AIP) system that the Defence R&D Organisation (DRDO) is indigenously developing will be ready to drive the Indian Navy’s submarines from 2024 onwards.

Consequently, this AIP will not power the six new submarines that the navy is tendering in a Rs 45,000 crore programme called Project 75-I. Instead, those six boats (as the navy traditionally refers to submarines) will have AIP systems that the foreign vendor must offer.

A Request for Information (RFI), which the navy sent out to global vendors under Project 75-I, kept alive both options – an indigenous AIP, as well as a foreign one. Now, top navy sources confirm, a decision has been taken for an imported AIP.

Meanwhile, the DRDO’s AIP system will, from 2024-25 onward, be “retrofitted” into six Scorpene submarines that are currently being built in India under Project 75, say the sources.

The first Scorpene submarine, INS Kalvari, which was commissioned two years ago, is scheduled to undergo its first “mid-life refit” in 2024-25. In this expensive and time-consuming process, the submarine is cut open and each part inspected and, if needed, replaced. During this process, a DRDO-designed AIP will replace Kalvari’s current diesel-electric propulsion system.

The second Project 75 boat, INS Khanderi, was commissioned in September and another four are still to be delivered by Mazagon Dock Ltd, Mumbai (MDL). All these will be retrofitted with DRDO AIP systems as they follow the Kalvari into mid-life refit at two-year intervals.

The bright side of that, say navy sources, is that the Scorpenes will provide a ready platform for the indigenous AIP.

An AIP system powers a submarine without using air from the atmosphere, which is essentially for conventional diesel-electric submarines. In the latter, large banks of electric batteries power electic motors that turn the submarine’s propellers. But the batteries quickly get discharged and the boat must surface every day or two to run onboard diesel generators (which require atmospheric air) to recharge their batteries. During this process, the surfaced submarine is vulnerable to detection since enemy radars quickly detect submarine masts or snorkels protruding above the surface.

To avoid detection, the ideal solution is nuclear propulsion. Nuclear reactors require no oxygen, which allows these submarines almost indefinite underwater endurance. However, nuclear propulsion has technology challenges and India is struggling to build a reactor small enough for an attack submarine.

AIP provides the next best solution, allowing submarines to remain underwater for up to two weeks, which provides the enemy with less opportunity to detect a surfaced boat.

The most common AIP systems use “fuel cell technology”, which generates power through the reverse electrolysis of oxygen and hydrogen, with the two elements chemically combining to generate electricity to charge the submarine’s batteries. However it is dangerous to store highly inflammable hydrogen on board.

The DRDO’s AIP system relies on the innovative Phosphoric Acid Fuel Cell (PAFC) technology. This is more rugged, tolerant of fuel impurities, and offers longer life and efficiency, which makes it cost-effective.

A month ago, navy chief, Admiral Karambir Singh, visited the Naval Materials Research Laboratory (NMRL) at Ambernath, Maharashtra – the DRDO laboratory that is developing the indigenous AIP – to witness progress. Navy officers say he was demonstrated a land-based prototype (LBP) of the AIP, which has demonstrated the ability to generate power, independent of air, for up to two weeks.

The DRDO’s current challenge is to develop this LBP into a “marinised” AIP system, which can fit into an actual submarine and operate underwater in live conditions. Navy and DRDO sources are confident that can be achieved in three-to-four years.

The navy had the option to fit French AIP systems into the Scorpene submarines that were contracted in 2005 under Project 75. However, the French offered a relatively untried system called “Module d'Energie Sous-Marine Autonome (MESMA). The navy decided not to take the risk and ordered a conventional diesel-electric system instead, with the DRDO charged with developing an indigenous AIP.

Pakistan’s navy ordered the MESMA AIP system for its Agusta 90B submarines. There have reportedly been problems with its reliability and effectiveness.
Posted by Broadsword at 15:51

Nuclear sub reactors are noisy...diesel subs are quit and with AIP WILL BE LEATHAL IN AGAINST PAKISTAN

Congratulations... A good day to start with such a welcome news...
But it is far away as it must demonstrate its quality, reliability and performance...

India must order 6 additional Scorpenes right now so they can be fitted with these AIPs too...
The old submarines may no longer be in service by the time the new Scorpenes comes into stream...
India must also try indeginization of as much of Scorpenes as possible like South Korea did...

Good news. Hope these are used in P75I class too.