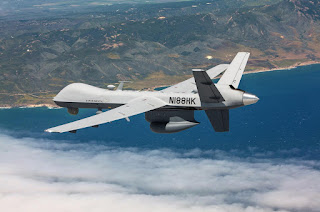 The navy’s critical mission to watch over the Indian Ocean is being undermined by a capital budget that has declined on a real basis. Plans to buy a fleet of Sea Guardian unmanned aerial vehicles (UAVs) – commonly called drones – and more than double the P-8I Poseidon multi-mission maritime aircraft (MMAs) fleet, have been pared down say navy planners.

India was planning to buy 22 Sea Guardian drones for the navy, a purchase worth $2 billion. There was another $4 billion plan to expand the P-8I Poseidon fleet up to 28 aircraft, to build an adequate fleet of long-range maritime reconnaissance assets.

But now the navy is buying only 10 Sea Guardians and expanding its P-8I fleet to just 20-22 aircraft. Part of the surveillance task will be taken up by launching a dedicated surveillance satellite that all three services – army, navy and air force – can share.

However, the Sea Guardians now being bought are more capable UAVs than earlier envisioned. Navy sources say the “price and availability” details received recently from Washington are for a Sea Guardian that can carry out long-endurance, high-altitude surveillance, as well as the “hunter-killer” role with its on-board missiles.

With Washington having green-lighted the purchase of the fully loaded Sea Guardian and MQ-9 Reaper, the military is preparing a “statement of case”. Based on this, the Defence Acquisition Council (DAC) will clear a tri-service procurement, with a single contract for drones for the army, navy and air force.

With India last year joining the Missile Technology Control Regime (MTCR) and signing the Communications Compatibility and Security Agreement (COMCASA) with the US, US export control hurdles to this sale have been significantly lowered.

Currently, all the navy has by way of long-range maritime surveillance assets are eight P-8I Poseidon’s that Boeing delivered between 2013-2015. That $2 billion purchase was supplemented in 2016 with a billion dollar purchase of four more P-8Is, deliveries of which will start in 2020-21. Thereafter, the navy will order no more than another 8-10, capping the P-8I fleet at 20-22 aircraft.

“The P-8I is the world’s premier maritime aircraft, but we must scale down, partly to reduce costs. But we will share surveillance responsibilities across platforms,” says a senior admiral in New Delhi.

The P-8I and the Sea Guardian complement each other in watching over vast ocean expanses. The P-8I, which is based upon the Boeing 737 airframe, carries a larger weapons payload, including heavy torpedoes and the Harpoon anti-ship missile that can sink submarines and surface warships. However, being a manned platform, crew fatigue limits the P-8I’s endurance to 8-10 hours.

In contrast, the Sea Guardian drone can watch for as long as 24-36 hours over a patrol area 1,000 kilometres from its base. Its pilots and weapons operators work in shifts at a ground station ashore, connected with the drone through a two-way data link. With crewmembers relieving each other every 6-8 hours, the Sea Guardian’s endurance is limited only by its fuel capacity.

While the Sea Guardian is not as heavily armed as the P-8I, the ones being supplied to India carry two small anti-ship missiles to strike any targets that appear. Alternatively, the ground station on shore can home in a P-8I to strike the target, or direct fighters like the maritime strike Jaguar.
Posted by Broadsword at 08:04

the navy should have gone ahead with the drone contract and I see no major benefit by linking it with IAF and IA contracts. We rapidly need to scale up the recon capabilities across the coastlines. 10 is a very small number which means we can only deploy in the western seaboard given the penchant for the neighbour that side.
What about deployment in A&N islands?
Until all the major surface platform contracts are completed, budget for these line items will be very limited...

The title as usual is misleading. Indian navy has seen enormous increase in its surveys capabilities compared to 20 years back.
That time had a few harrier jets, In-38 and Tu 142. The new Boeings P8I, MiG29s, Hawks , 2 squadrons of heron and searcher UAV have added enormous capabilities.
Now they want smaller maritime reconnaissance aircraft , and more than 200 NMRH and NLUH !
They have not been able to prioritise their spending , making grand plans not executing them.

We lack basic anti sub and anti mining boats, but want build 65k ton carrier !
The time taken to build warships is too large compared to international standards.
Ships launched have ancient weapons and No plan to indegenize them.
The drones ordered and on order are sufficient.
Let them work and have next set drones locally designed and manufactured. Then project will move fast.

No plan to work with kalyanis or Tatas develop guns (127 mm, Gatling type) either.
No attention given balanced growth.


They are in a much better shape than Air Force and army. Time we focus on northern borders.

Ask navy to halve the time for building ships.
Make coast guard independent of navy. Let their officers head the arm. Put it under ministry of home .
Navy officers have no business to head coast guard now, the force is mature.

India has cash crunch, so does its people - 87% of whom live on $5.5 a day. While the PM Modi spends 9000 crores on advertisement and his overseas travel. This amount alone can buy several P-8I.

Modi is our most shameful PM ever.

One more example of why integrated commands are the way forward. As a thought experiment, just extrapolate how this would have unfolded if the users were bickering for a share of the assets to be deployed in their command rather than the juvenile, empire building that seems to be the game now. That of course would take a brave RM, a braver PM and the bravest trio of 4-star officers to hold office.... a big ask I suppose. Till then, we think and behave like a large continental army rather than a strong tri-services power. Come to think of it, we named our aircraft carrier Vikramaditya rather than Raja Raja or Rajendra. No wonder Shivshankar Menon defends the appalling decision to do nothing after 26/11 in his book. We have the leadership (civil & military) we deserve.