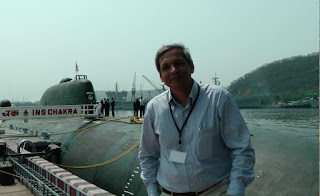 Russia was India’s biggest arms supplier from 2014-18; further deals valued at $15 billion are in the pipeline (Photo: At the commissioning of INS Chakra in 2012)

Defence business between Russia and India is booming, with contracts worth over $15 billion in the pipeline. This is despite rising strategic friction between Moscow and New Delhi, and the threat of US sanctioning India for defence ties with Russia.

On Monday, the Stockholm International Peace Research Organisation reported that Russia was India’s biggest arms supplier from 2014-18, accounting for 58 per cent of all India’s defence imports. And this is set to continue.

On Friday, India signed an estimated $3 billion contract with Russia leasing a Russian nuclear attack submarine (SSN) for ten years, starting 2025. Five days earlier, Prime Minister Narendra Modi inaugurated a factory that will manufacture at least 750,000 AK-203 Kalashnikov rifles for the Indian Army, worth another billion dollars. In October, the ministry of defence (MoD) announced a contract to build two Krivak-III class frigates in Goa Shipyard. Two more Krivak-III frigates are coming fully built from Russia as part of the four-ship procurement, estimated to be worth $3 billion.

The Indian Air Force (IAF) is also buying Russian. In October, it inked a $5.43 billion contract for five S-400 Triumf air defence units. Last month, Business Standardreported the IAF’s interest in buying and upgrading 21 MiG-29 fighters lying unused in Russia for about a billion dollars. The IAF has also mooted a new contract to build 18 Sukhoi-30MKI fighters in Hindustan Aeronautics Ltd (HAL) for over $800 million. And HAL and Russian Helicopters have tied up to build 200 Kamov 226T light helicopters in India, worth about $2 billion.

From Russia with love

These big-ticket contracts, worth over $15 billion exclude India’s large annual outgo on maintenance, spares, overhaul and upgrade of its existing Russian platforms. Nor do they include other procurements in the pipeline, such as the “very short range air defence system” (VSHORADS), where a Russian vendor has emerged the lowest bidders, but has not yet been awarded a contract.

Despite this thriving defence trade, New Delhi and Moscow have an increasingly prickly relationship. Russia provided only qualified support after the IAF struck a Jaish-e-Mohammed camp in Balakot, Pakistan on February 26. Earlier, Russia had condemned the February 14 suicide bombing in Pulwama that killed 40 Indian security men, stating that “those who ordered it and carried it out” should be “duly punished”. Moscow also affirmed “unwavering support” for India’s “uncompromising fight against terrorism”, omitting, however, to mention Pakistan as the Jaish’s home.

Russia further nuanced its line after the Balakot strike, expressing “grave concern” over the “escalating situation” along the Line of Control (LoC) between India and Pakistan “which are Russia’s friends.” New Delhi has noted this unusual equivalence.

The day after Balakot, when Indian foreign minister Sushma Swaraj met her Russian counterpart, Sergey Lavrov, on the sidelines of a Russia-India-China (RIC) foreign ministers’ meeting, the Russian Ministry of Foreign Affairs (MFA) “expressed hope for a de-escalation” of the situation. On March 28, the MFA referred to “dangerous manoeuvres” along the LoC, urged restraint and offered counter-terrorism support to both countries. Here again, Moscow placed India and Pakistan on par.


Given New Delhi’s longstanding antipathy to international mediation on Kashmir, its feathers were most ruffled by Moscow’s offer to mediate in the crisis. On March 1, after a telephone call between Lavrov and Pakistani Foreign Minister Shah Mehmood Qureshi, Moscow expressed “readiness to promote the de-escalation of tensions”.

Indian foreign policy experts ascribe Russia’s new even-handedness, even deference to Islamabad, as stemming from Moscow’s wish to play a central role in an Afghan settlement with the Taliban.

Towards this, Russia’s defence ministry last month announced the supply of a “small” number of Mi-35 attack helicopters to Pakistan. This supplemented four Mi-35s supplied in 2016-17 – the first combat platforms Russia sold to Pakistan since the Treaty of Friendship and Cooperation with India in 1971.

Then, in Vietnam last month, Lavrov dismissed the Indo-Pacific concept as an American ruse “to get India involved” in balancing China. He indicated that this was an artificial construct to align India with Japan, “which has no love lost for India”.

Even so, Defence Minister Nirmala Sitharaman attended a Russian briefing on the new MiG-35 at the Aero India 2019 show in Bengaluru last month. Ministry insiders say there is little chance of the MiG-35 winning a tenderfor 114 medium fighters for the IAF, or the navy’s tender for 57 multi-role carrier borne fighters.

However, Russia remains a strong contender in the navy’s Project 75-I tender for six conventional submarines for an estimated $4-5 billion.

Arms purchases from Russia render New Delhi vulnerable to sanctions under an American law passed in 2017 – called “Countering America’s Adversaries Through Sanctions Act” (CAATSA). This mandates sanctions against countries that engage in “significant transactions” with Russian, Iranian and North Korean defence and intelligence entities. President Donald Trump is empowered to waive these sanctions, but Washington sources say waivers would be given only in exceptional cases.
Posted by Broadsword at 07:47

Russia was India’s biggest arms supplier from 2014-18, accounting for 58 percent of all India’s defence EXPORTS.


It should be IMPORTS and not EXPORTS.


Caps used only for simplicity. Not shouting :-)

Any idea why the Army decided to go with the AK203? I read on thefirearmblog that the gun is chambered in the 7.62×39mm as opposed to the 7.62x51mm NATO which the Army preferred? I also can't understand why the AK308 was not selected which is based on the AK400 and seems to be an improved version of the AK200 series rifles. The AK12 and AK 15 which is based on the AK400 will be standard issue in the Russian army.

I still think handing the Ka226T to HAL is a big mistake. They already have a competing analogous solution which they are designing i.e. the LUH. The production should be given to a private sector.

Thanks. Amazing what changing around two digits can do!

Thanks for pointing out the error. I've corrected it.

7.62 X 51 is a longer bullet with more propulsion charge, higher muzzle velocity hence longer range and better stopping power (more penetration and killer wound ballistic). Since Infantry works on causing attrition right from 1500 meters (MMG) down to 10 meters they require a caliber to be effective at those varying ranges to be engaged with three types of weapons. The target is not only personnel but may also be soft skinned vehicles some natural or artificial cover. 7.62 X 51 suites the bill and proven caliber.

In anti terrorist or anti insurgency operations and close point defense such as defence of a Gun Area, the engagement hardly takes place beyond 100 meters. 7.62 X 39 mm cartridges have been more than adequate to achieve desired results at those ranges and situations. Lighter cartridges means better accuracy in automatic firing, more cartridges in the magazines, lighter gun weight and better results for close battles. Hence, that caliber is suitable for counter terrorist, counter insurgency forces and other forces which are required to respond to enemy action such as amushes, raids and blockades at closer ranges and high volume of fire. 5.56mm caliber has been found wanting in that it does not cause sufficient wound to enemy to incapacitate him from responding and even after getting wounded, the enemy may continue firing.

I had submitted a comment under the other blog post of my impressions about the political problems of J&K. I had pointed out that "Dadagiri and Badmashi" of the majoritarianism of the Valley Muslims is one of the political problems problems. I had also suggested that there should have been members from POK, Gilgit and Baltistan in the J&K assembly for a true and balanced representation.

I am happy that many sections in J&K have started demanding it including representation for Kashmiri pundits. This is the only way Ghulam Nabi Azad can ever become CM of J&K or he may just forget it. Congress should support the idea.

Do you see any hidden commitments from Russia in Chakra 3 lease for $3 billions?
Like some support for Advanced Miniaturized Nuclear Reactor for SSBN and SSN and possible for an aircraft carrier?

I do also notice some distance between Russian FM and Indian FM for a long time...
I think Russia is under the economic thumb of China...

But why would India order such a big ticket items when Russia is distancing?
Isn't it going to create future problems?

IAF is missing golden opportunities in the recent air counters with PAF. Heavy weight SU30 could have been employed to counter F16. This would have psychologically demoralized the PAF. It’s PAF itching for the fight. Give it to them


It does seem that PAF won the exchange decisively. It is the reason that we have former CAS Tipnis saying if IAF had Rafale fighters, it would have shot half of the PAF aircraft down.

India is buying specialised arms that we cannot get elsewhere from Russia and a strategic relationship requirement.
I don’t think there is any point in complaining. A lot of things in defence are best kept unknown.
AK203 is a balance between cost & techology for anti terror forces like RR, Assam rifles etc.
KA226, there was so much politics in selection of LUH, that Govt decided on this copter as an IGA. We should have started getting these by now, something seems to be delaying this, any idea who/what ?

Addl. Su30, MiG29 are desperate purchase due to screwed up MMRCA process going on since 2007.looks like babus of MoD imposed this competition without understanding the IAF requirements,Kargil experiences & strategic relationships involved. The political leadership of those times also seem to be have gone by the words of babudom, now we are paying a heavy price.