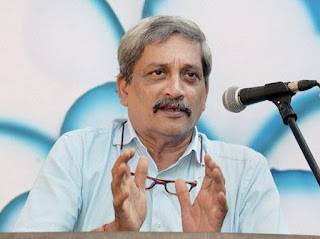 Manohar Gopalkrishna Prabhu Parrikar, who passed away in Goa on Sunday evening, is remembered in the defence ministry and across India’s defence industry as a rare defence minister who grasped the daunting technological dimensions of the military.

His background as an Indian Institute of Technology (IIT) graduate and as a chief minister with an excellent track record as an administrator equipped him to initiate defence industry and policy reforms that are only now beginning to bear fruit.

On November 10, 2014, Parrikar left his post as Goa’s chief minister and took over the powerful defence minister’s post, replacing Arun Jaitley who had functioned as a stopgap for the previous five months. Parrikar remained defence minister for just 28 months, returning to Panjim on March 13, 2017 to head the newly elected Bharatiya Janata Party (BJP)-led coalition government.

“Like AK Antony before him, Parrikar came to the defence ministry with a reputation for personal honesty. But Antony was wary of private companies and felt comfortable only with the public sector. Parrikar was confident enough to throw open his doors for private firms, and to co-opt them into building India’s defence capabilities,” says a top civil servant who served under Parrikar.

“His extraordinary passion and commitment to the public good brooked no short cuts or unholy compromises. A rare figure in public life, his absence will be sorely missed,” says former defence acquisitions chief, Vivek Rae.

In instituting defence policy reform, Parrikar often underestimated the resistance from entrenched interests. Consequently, he seldom met his self-imposed deadlines, whether in coming out with the new Defence Procurement Procedure of 2016, a Make in India policy, or the Strategic Partner (SP) policy that overtly co-opts the private sector into defence manufacture.

Yet, many of these policies are now coming on stream and the credit belongs to Parrikar, say defence ministry bureaucrats.

“He initiated unprecedented reforms, bringing in a fresh breath of openness in the defence ministry and engaging industry before promulgating policies. Unfortunately, many of his path breaking initiatives slowed down after he returned to Goa,” says Jayant Patil, L&T’s defence head.

The biggest tribute to his legacy will be to complete his unfinished agenda,” says Rahul Chaudhry, who heads Defence Innovators and Industry Association.

“He was an affable, approachable, man-on-a-mission who devoted himself to deciphering and simplifying the complexities of defence acquisition policy,” recalls Rajindar Bhatia of Kalyani Group.

Parrikar’s tenure was not without controversy, such as when he stated in May 2015: “We have to use terrorists to neutralise terrorists.” Typically, Parrikar never apologised for that statement or retracted it.

However, Parrikar had only a limited role in the single biggest defence controversy that still dogs the BJP-led government: the purchase of 36 Rafale fighters from French vendor, Dassault. As numerous reports have now established, key decisions relating to that contract were taken in the prime minister’s office (PMO) or by the cabinet committee on security (CCS), including the decision in early April 2015 to announce the purchase during Prime Minister Narendra Modi’s visit to Paris that month.

Parrikar was left with the job of defending the deal to the media. He consistently made it clear that, his support notwithstanding, the decision to buy 36 Rafale was Modi’s and the PM should be “given credit” for it.
Posted by Broadsword at 07:27

Albert Speer was not as bad as Herman Goring and Himmler was the worst, Anton Drexler founded the party and the main man was Adolf Hitler.
You have not compared Manohar Parrikar to Albert Speer? Both Educated, intelligent, hardworking, Have I missed something, I infer from your article, like Speer he was the best of the bunch.
Was there a need for the author Gitta Sereny To be a varnish woman, an apologist for Albert Speer. Are we going too soft in this article on Parrikar?
Daesi fascism is unique but it does appear like Germany in the luminous robes of flaming patriotism and has its occasional educated hardworking thug, who was a good defense minister, who belonged to a gang of thugs, but nevertheless what a nice guy!
Manohar Parrikar led an organisation which in India takes a genuinely indigenous shape and color, like the Nazi’s, Parrikar’s Khaki Shorts used decisive tactics to tap into India’s great springs of public opinion, Parrikar became chief minister and defense minister as a result.
Parrikar did something good for defense, he was for ‘made in India’ manufactures admired him, so Broadsword rightly mentions this in the obituary.
However you have made the Modi Bakts very unhappy, you did not mention.
Parrikar’s was a leader of a esteemed party that also promotes a made in India fascism, it is the best kind, during the time of the Mahabharata we had this pure form of fascism and pure communism and plastic surgery. Archeological evidence proves India was far ahead in Vedic Times, of even today’s NASA.
Jai Hind

Parrikar for many years was Sanghchalak for north Goa
Parrikar led spread the communal ideology of the Sang Parivar a state with a large number of Christians and Muslims. The popularity of the BJP in Goa increased During his chief ministership, Goa saw the rise of radical and militant Hindu organisations and its first instance of communal violence. This ideology of hate under his leadership spread to the Maharashtra-Goa-Karnataka belt. Parrikar joined the RSS while still in school. Pre admission to the IIT, he had been made Mukhya Shikshak in Mapusa. He headed a unit of the RSS in the IIT. He was a firm believer in the writings of Savakar and Golwalker. As a leader of the RSS Parrikar played an important part in dividing Hindus and Muslims and thus weakening the secular fabric of India, in this regard he was an anti national, he diminished the unity of the people of India, and did not strengthen the integrity of India. The harm the outfit he led in Goa did by dividing communities, will last for a long time it, and is more significant than anything he did as defence minister.
Although he had Christians as legislators the community has felt very insecure since he brought the BJP into power.

Parrikar ji has shown the entire nation how a BJP Karyakarta, even during his toughest time, is committed to the philosophy of Nation First, Party Next and Self Last.
He will always be remembered for his contributions as India’s Defence Minister and against Pakistan and all terrorist traitors. and as CM of Goa many Hindus were saved from conversions to Christian religion. Deeply sadden by the news.A true desh bhakt. A true hero for aam people. A true politician. A true fighter against anti nationals, No One can fill his place RIP dear sir ManoharParrikar May your ideas guide many of us into making this into great Hindu nation.
IIT engineer
-Honest politician
-Most popular CM
-No VVIP culture
-Father of OROP
-Rafale deal main negotiator
-Surgical strike hero
How is the josh, still high sir as you are a true role model !
OM SHANTI

So why did Parrikar put himself in a position to have a limited role in the Rafale deal. Why did he abdicate his responsibility as defense minister and handed over everything to the PMO. As per the constitution he is responsible directly for the department of defence. Relieving himself of responsibility was not an option for him under Indian law. A minister can bring a issue in his department to Cabinet for a collective decision but cannot hand over a departmental decision to the PMO office, and wash his hands off the matter, the defense secretary and cabinet secretary understand the concept well.
Parrikar is culpable if the Rafale deal has gone wrong. Under Indian law if criminal proceedings take place (unlikely) then he would have been charged as co conspirator in the fraud along with the Prime Minister.
You have cut this Parrikar a lot of slack Mr Shukla in your article, is it because you wish not to speak ill of the dead.

Sorry, in the middle of all the grief and eulogy for ManoharParikkar, I find it necessary to remind people that HE WAS A KAR SEVAK WHO PARTICIPATED IN BABRI DEMOLITION. A criminal act whose consequences are still being felt by India.
In 1992, Parrikar and three others entered the press room of the Panjim secretariat, to recount their experience of travelling as kar sevaks to the demolition of the Babri Masjid.
At the time, Goa was an oasis of communal harmony —minority baiting was unheard of.
In those values stand diluted when he came to power
In 2006, a madrasa was demolished and the houses of Muslims attacked over three days with thousands of Muslims fleeing.
This was the first recorded instance of communal violence in the state.
In the same year the 40 accused in the riots, including two BJP office bearers, were acquitted by a court for lack of evidence after being arrested by the Goa police for attacking muslim houses. The Hindu vote was polarised away from the 26% Christian and 16% Muslim vote and with the spread of anti muslim hatred amongs Hindus. Hindus now increasingly vote,for the BJP.
The RSS affiliated Sanatan Sanstha, which was investigated in a bomb blast in Margao in 2009, operates,openly out of its headquarters in the temple taluk of Ponda. Its main political patron Ramkrishna Sudin Dhavalikar, a five-time BJP MLA from Marcaim, was proposed to become Parrikar’s successor.
Their newspaper the Sanatan Prabhat, the Sanstha’s daily newspaper, had its patron Parrikar, this newspaper has been getting Goa government advertisements for years.
Parrikar's and the BJP's reign in Goa has allowed the RSS to increase its footprint of schools and institutions in Goa, Vidhya Bharati schools, affiliated with the RSS, have been increasing in Goa. History textbooks have now been replaced and a distorted fictitious version of history is presented in the new ones.
The issue of control of schools has been lurking beneath the surface in Goa, with the RSS pitted against the Roman Catholic Church.
It has now become increasingly difficult for Muslims to find accommodation in housing societies.
The saffronisaion of Goa once a state where religious discrimination was unheard has taken place aided by the RSS and their shakas, Parrikar was their Swayamsavek who greeted Modi after the Gujarat riots and hosted him in Goa. where Modi held a rally of RSS cadre.

He was not aware of the deal....he told reporters that there would be 36 rafales in dy away condition....

your article could have been written when he was alive. In our country people wait for someone to die to appreciate him or her, which is a pity.

Parikkar was by far the best defence min, he was brainy and was firm and honest and above all wanted to get the work done. also he was a political lightweight which is what is needed in MoD. pity that for electoral gains he was moved away. Had he been in MoD till the end the SP reforms and restructuring would have all got concluded. RIP.

In instituting defence policy reform, Parrikar often underestimated the resistance from entrenched interests. Consequently, he seldom met his self-imposed deadlines, whether in coming out with the new Defence Procurement Procedure of 2016, a Make in India policy, or the Strategic Partner (SP) policy that overtly co-opts the private sector into defence manufacture. PCCSA dumps