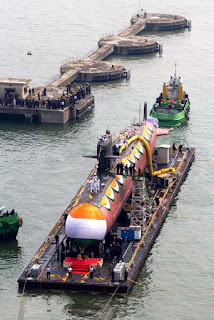 The Ministry of Defence (MoD) on Thursday cleared the procurement of six advanced submarines for “over Rs 40,000 crore”. This acquisition, codenamed Project 75-I, has been in the pipeline for a decade.

The six submarines will have “air independent propulsion” (AIP), which will allow them to remain submerged for up to 14 days, during which it is difficult to detect them. Conventional diesel-electric submarines must surface every 48-72 hours to charge their batteries, when they become vulnerable to detection.

“This is the second project under the MoD’s ambitious Strategic Partnership (SP) model that… envisages indigenous manufacturing of major defence platforms by an Indian SP who will collaborate with a foreign OEM (original equipment manufacturer) to set up production facilities in the country”, stated the MoD.

“Today’s DAC (Defence Acquisition Council) approval would be the second such (SP model) project following indigenous production of 111 naval utility helicopters that was approved in August 2018”, it said.

In 2017, the navy sent out “requests for information” (RFIs) to a number of global OEMs, soliciting interest in Project 75-I. The navy chief, Admiral Sunil Lanba, stated in December 2017 that four vendors had come forward: ThyssenKrupp Marine Systems from Germany, Kockums from Sweden, Naval Group from France and Rosoboronexport from Russia.

This has opened the door for a two-track process: floating a global tender to select the OEM, while simultaneously going ahead with shortlisting prospective Indian SP firms. Once that is done, the SPs will bid in partnership with their chosen OEMs.

The selection and contracting process and the actual building of six submarines could take another decade. Meanwhile, the navy will make do with a depleted conventional submarine fleet that consists of nine Russian-origin, Kilo-class vessels; four German-origin HDW boats; and six French-origin Scorpene submarines being built by Mazagon Dock Ltd, Mumbai.

There will also be four-to-six Arihant-class nuclear ballistic missile submarines (SSBNs). These will be a part of India’s nuclear deterrent, with no role in conventional naval warfighting.
Posted by Broadsword at 08:51

Out of all the services it’s the navy that is really helping the Indian Industry. The planned sub force is 24 subs I think. The way to go about it would be to order more Scorpene’s. Double the order and get 12 instead of just 6. All of them with the DRDO designed AIP module. At that point even if Project 75I takes a long time the navy will still have a respectable number of subs i.e. 12, assuming the navy decides to retire all its older submarines. Of course they will also have Arihant and Akula class subs.

Ideally the navy subs should look something like the following

This will lead to a total of 32 subs. Left out the Akula’s as they are leased and mostly used for training SSN and SSBN crews.

The plan was for 1 Russian and 1 western sub. We should stick to it.
Make it a Govt to Govt deal.

for 6 subs the fight is so intense then it means that there can be no conclusion without a "scam". if contract is given to MDL then L&T must shut down. if it is given to L&T then opposition will visit MDL and scams will erupt and all hell will break loose. never should we come with such small number approach. order 12 subs in one shot and split evenly between MDL and L&T. whom they select is left to them. until this is done this contract will never materialise and all we will hear will be such meaningless MoD approvals which have no value or relevance. same for fighter jet contracts - ensure navy and IAF contracts are evenly split between 1 PSU and 1 private player.