Improved, Tejas Mark 1A to fly by 2022, if contracted this year 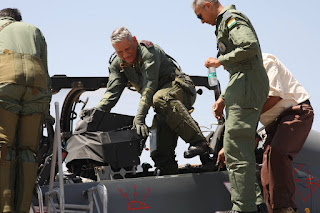 An advanced version of the Tejas light fighter could fly by 2022, said Hindustan Aeronautics Ltd (HAL) on Thursday, a day when army chief, General Bipin Rawat, and principal scientific advisor to the government, Vijay Raghavan, both took flights in the fighter at the Aero India 2019 show in Bengaluru.

However, that depends on a crucial step: the Ministry of Defence (MoD) must place the contract for 83 Tejas Mark 1A fighters this year. HAL executives point out that building a complex fighter from ground up requires three years. For each year delay in ordering, there will be a corresponding delay in delivery.

The MoD accorded “Acceptance of Necessity” for 83 Tejas Mark 1A in December 2017. HAL submitted its technical and commercial bids in March 2018 and technical clarifications have been obtained. Now the MoD must open the commercial bid, negotiate a price with HAL and then place a formal contract. Only then does the three-year clock start running.

“Even Dassault insisted on three years lead time for delivering the first Rafale. Similarly, we can only start ordering the long-lead items needed for building the first Tejas Mark 1A once we have a contract in hand”, explained R Madhavan, chairman and managing director, HAL.

The Tejas Mark 1A fighter will have four major improvements over the current Tejas Mark 1, which was granted interim “final operational certification” on Wednesday. The two most challenging involve equipping the fighter with active electronically scanned array (AESA) radar, in place of the current manually scanned Israeli Elta EL/M 2032 radar; and mounting a “self-protection jammer” (SPJ) on a pod under the Tejas’ wing.

Two other upgrades – improving the “maintainability” of the fighter, and fitting it with external refuelling capability – are already well in hand.

While awaiting an order, HAL has gone to extraordinary lengths to prevent delay. Business Standard learns it has already invested Rs 700 crore of company funds into ordering the AESA radar and EW suite from Elta. This will allow development to proceed, even without an order.

Once the Mark 1A obtains operational clearance, HAL plans to deliver all 83 fighters – each of them priced at about Rs 400 crore – in three-four years.

To ramp up production, HAL has set up a second production line in Bengaluru and resorted to outsourcing aerostructure assembly. On December 20, 2017, the defence minister told parliament: “For ramping up production capacity from existing eight aircraft to 16 aircraft per annum, Government of India has sanctioned Rs 1,381.04 crore in March 2017”.

After significant delays due to teething troubles in manufacture and repeated changes in specifications by the IAF, HAL is on track to deliver eight fighters in 2018-19.

“We are expanding our capacity to 16 Tejas per year. By the time the Tejas Mark 1A goes into production, our capacity will increase to 24 at least. That is how we intend to deliver the entire order for 83 Mark 1A in three-four years”, explained HAL’s design director, Arup Chatterjee.

An area of conflict in the Tejas Mark 1A is the IAF’s wish to integrate the Meteor air-to-air missile into the fighter. The Meteor’s vendor, MBDA, has made it clear it would not integrate their prime missile with an Israeli radar, which has been chosen for the Tejas Mark 1A. But HAL says the IAF has not formally opted for the Meteor.

“The IAF has not included the Meteor as a firm requirement. Weapons come under the category of ‘customer furnished equipment’. If they provide us with the Meteor missile, we will see how it can be integrated with the Tejas,” said Chatterjee.

Before starting to build the Mark 1A, HAL must deliver existing orders for 20 Tejas Mark 1 single seat fighters. Also on order are eight twin-seat Tejas Mark 1, but repeated changes in specifications by the IAF – notably the demand for mid-air refuelling, which the IAF earlier required only in the single-seat Tejas – has preventing them from being produced.

Meanwhile, the Defence R&D Organisation’s Aeronautical Development Agency (ADA) is working on giving the Tejas the remaining three capabilities required for final operational certification. These include expanding the envelope of its “beyond visual range” missile, giving it mid-air refuelling capability by night, and of carrying out “windmill relight” if its engine switches off during flight.

Rejecting allegations that HAL was not capable of building the Rafale, Madhavan said HAL might start slowly but, after building 50 Rafales, it would be as fast, or faster than Dassault builds in France.

He explained it was internationally acknowledged that the learning curve for aerospace manufacture has a coefficient of 1.79. In other words, if building a fighter requires 179 man-hours at the start of production, that reduces to 100 man-hours when production stabilizes.

HAL executives point out that the Hawk trainer began being built at a slow pace, but then matched, and then surpassed, the speed it was built in the UK by BAE Systems.
Posted by Broadsword at 08:08

450 Crores for a Sukhoi 30MKI. Now 400 Crores for an LCA Mk1A. I thought the LCA was supposed to be a low cost mass produced aircraft. The vendors for the AESA radar, SPJ pod and external refuelling capability must really be ripping HAL off, considering the original Mk1A fighter cost around 160 crores. Why is there such a huge increase in price? Which sub system is causing the price to bloat to this level?

I hope Mk1A fires the gun.
Otherwise this is the way to go.

Now that Tejas has received FOC, the IAF should order another squadron in FOC configuration as soon as possible to shore up fighter numbers instead of buying older Mig's or adding Su-30MKI's to their fleet. This will bring the total of LCA Mk1 FOC orders to 60. It will also keep the HAL production line running for 4 to 5 years. Later on the IAF can run upgrade programs to bring the Mk1 IOC and FOC fighters to Mk1A or even higher standards based on the tech available at the time.

HAL on its part should look to export Tejas to other countries rather than relying on the IAF as the sole customer. To increase production rates they can use the facilities they used to manufacture Su-30MKI's which will fall idle once they have completed delivery of all ordered fighters.

As far as the Meteors are concerned an analogous solution is already being developed internally i.e. the DRDO's SFDR. We should focus on that rather than integrating the Meteor.

HAL wanted to profit big time from Rafale, as a business Organization they should have then quoted. 1 to 1.25 times manpower then !
Crooks.
Anyway they have a chance to do that in MMRCA2, quote fixed price index to inflation.
Then give 25% dividend to share holders too.

MK1A will start flying from 2022 onwards!! and how many years to get FOC for MK1A?? and what will HAL do for 3 years until then?

they will start making 20 FOC aircrafts. what will happen once these are delivered? lines will be idle. same story with Su-30mki and ALH. really poor planning. and blame will go to every one except HAL. since engine and basic airframe is not changing then they can go ahead and order in todays rates...what a pity.

Let's hope that costs reduce. The IAF should not be paying more than 300-350 Crore for each MK1A.

American manufacturers get 44 months to devlop flying prototype of the of the fifth generation prototypes and here you need that much time to just make few modifications on the FOC label led fighter that has extraordinary flying record. I feel something is wrong and needs to be fixed. There has to be lot of contribution from private sector giving already tested certified units with wiring and piping installed and well marked so that the time on the rig can be reduced to six months and thus instead of 16 , 32 Tejas fighters can be rolled out in a year. What happed to Safran Kaveri combo and is it producing 72-75 KN dry thrust then worth it to put it on Tejas. I would like to go with Tejas MK 3 with higher thrust engine of 142 KN class to have cranked delta wings and have 23-27 hard point to be developed. This development work has to be done and China has shown its military and industrial prowess which I feel India is lacking. I strongly believe AMCA project has to run parallel and would be very useful. Try to devlop Tejas MK 1A quickly in two years and in three years have a prototypes ready for MK 2 . MK 1A is still a very lethal platform and much cheaper to maintain and have a very high sortie rate still can be an excellent force multiplier and having two hundred MK 1A would be very cheap alternative than expensive flying birds and can significantly streangthen the Air Force.

In short the production has to increase and anything less than 32 per annum is not good enough.

Well, knowing that DRDO already validated the 98kN version of Rafale's M88 engine as "Kaveri K9+" and that flight tests are about to be held and Dassault already provided blue-prints allowin nonetheless to stuff the M88/K9+ in but also to fit around 1000L more fuel in the airframe while, thanks to the lighter engine and mods, Tejas would lose 500kg weight...
This would mean more thrust than Mirage-2000 while being 1,400-1,500kg lighter and no need for a stretched Tejas Mk2 to fit GE F414 and 1000L more fuel!

Thales RBE2/AESA has been modified to fit in Tejas' nose. Flight tests were done in 2018, it is DRDO approved.

"Anonymous said... HAL wanted to profit big time from Rafale, as a business Organization they should have then quoted. 1 to 1.25 times manpower then !"
=>>>> HAL is a state-held company ;-)

"Critical Thinker said... 450 Crores for a Sukhoi 30MKI. Now 400 Crores for an LCA Mk1A. I thought the LCA was supposed to be a low cost mass produced aircraft. The vendors for the AESA radar, SPJ pod and external refuelling capability must really be ripping HAL off, considering the original Mk1A fighter cost around 160 crores. Why is there such a huge increase in price? Which sub system is causing the price to bloat to this level? "
=> Oh, you know, having HAL kit assembling Su-30s ends with a doubled price. Dassault initially thought about having HAL license building Rafales, then they audited the company to evaluate the costs... And ended concluding that building Rafales at HAL would... cost 2.7x more than building them in France where salaries are 10x higher if not more...

"What happed to Safran Kaveri combo and is it producing 72-75 KN dry thrust then worth it to put it on Tejas."
=> Safran M88/Kaveri K9+ has 98kN reheat thrust and, as promised, was delivered into 18 months. DRDO validated the engine and fight tests on Tejas are to take place in 2019..

India has a serious problem with bureaucracy and HAL works in a Soviet bureaucracy style which is even worst...

our Air Marshal Dhanoa was claiming that Tejas will have its first flight in 2020 while HAl chief says that it will be inn 2022, who is correct?