Doklam a year on: Bhutan more worried about India than China 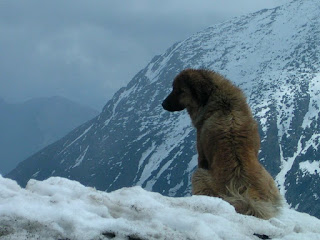 Looking down at the Chumbi valley from the Indian Army post at Nathu La, close to Doklam

Non-violent patrol confrontations are common along the undefined, 4,588 kilometre, Sino-Indian border, but the face-off at Doklam was unique. Indian soldiers were not defending Indian soil; they had crossed into Bhutan and claimed to be acting on Thimphu’s behalf, in accordance with a security treaty between India and Bhutan. For the 73 days that Doklam smouldered, Thimphu walked on eggshells, balancing between India’s stifling embrace and the potential consequences from China. 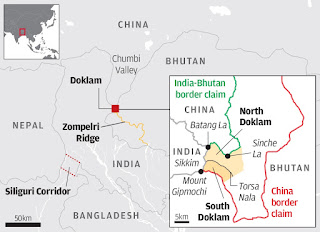 The Doklam crisis ended with mixed results for India. As the Indian Army chief himself admitted in January, Chinese troops continue to occupy North Doklam, while Indian soldiers have pulled out of Doklam and returned to their outposts in Sikkim. On the positive side, India managed to force China to halt building a road in Doklam, which it was extending southwards, across the Torsa Nala, to its claim line at the Zompelri Ridge, which runs southeast from Mount Gipmochi. Indian military planners believe it essential to enforce Bhutan’s claim line along the Batang La - Sinche La ridgeline, about 12-14 kilometres north of Zompelri Ridge. They worry that Chinese possession of Zompelri would give the People’s Liberation Army (PLA) a launching pad to capture the vulnerable Siliguri Corridor – a narrow, 29 kilometre-wide sliver of land, with Nepal on one side and Bangladesh on the other. It connects mainland India with its eight north-eastern states.

Some Sikkim veterans like Lieutenant General SL Narasimhan (Retired), who is on India’s National Security Advisory Board, believe concerns about Siliguri are overblown. Breaking through India’s strong border defences in Sikkim would require the PLA to mobilise large bodies of troops, giving India time to reinforce. Chinese troops would have to enter Doklam through the Chumbi Valley which is overlooked by dominating Indian positions that would pound the PLA with artillery, air and ground fire. Were the Chinese attackers to miraculously reach Gipmochi, they would then face the daunting task of advancing to Siliguri through 80 kilometres of forested mountains, without artillery or logistic support. Once in Siliguri, the isolated Chinese spearheads would face massive Indian counter-attacks.

Whatever the logic for Doklam, that confrontation has exacerbated Thimphu’s concerns about getting sucked into a Sino-Indian conflict. Bhutanese elites, and increasingly the public, believe they should settle their border with China, not tack a settlement onto India’s more intractable dispute. Beijing has offered Thimphu a strategic swap, in which it will concede to Bhutan disputed territory in the north, in exchange for Doklam. New Delhi, however, firmly discourages conceding Doklam to China.

A top-level Bhutanese politician told me in Thimphu: “Since 1984, we have had 25 rounds of boundary talks with China. There is still no settlement because we also have to take into account India’s security concerns. But we have to think carefully and get a settlement that is good for Bhutan.”

India has discouraged Bhutan from opening diplomatic relations with other countries, particularly with China, encouraging it instead to conduct diplomatic relations through its embassy in New Delhi. But now, with China outpacing India economically and militarily and showing its power through incidents like Doklam, Bhutan’s old elites and new, populist politicians increasingly worry about having hitched their wagon to the wrong horse. There is also a popular aspiration across Bhutan to emerge from India’s shadow and assert sovereignty more tangibly. New Delhi has not handled this aspiration with sophistication and sensitivity.

This causes resentment across Bhutan. Responding to Indian criticism of the recent Chinese ministerial visit to Thimphu, Tenzing Lamsang, Editor of The Bhutanesenewspaper tweeted: “I would advise Indian media outlets, commentators, think tanks & even policy makers against such excessive paranoia and speculation. This is what Bhutanese find irritating & at times even suffocating. You call us your closest friend, so at least trust us and give us some space.”

It is ironic that Indian assistance, as in Doklam, has only swelled Bhutanese resentment. India’s Border Roads Organisation has done much to create a network of roads in Bhutan under its so-called Project Dantak. But Dantak’s enormous visibility has worked against it. Last year, public criticism forced Dantak to remove from Paro airport a large sign saying “Dantak welcomes you to Bhutan.” Last month, Dantak was also forced to remove road safety reflectors that were in the colours of the Indian flag. Now there is criticism of Dantak for building roads too expensively.

Similarly, there is criticism across Bhutan about the hydroelectric power purchase arrangement with India, which has backstopped economic cooperation between the two countries. So far, the Indian government has funded the construction of hydel plants in Bhutan and paid Thimphu directly for the power it purchased. Now, New Delhi wants to delegate responsibility to its public sector power corporations, which would make decisions based on economic rather than strategic rationale.

New Delhi must realise that there are few takers in Bhutan for the logic that India’s military commitment to Bhutan gives it ownership over Thimphu’s security and economic decision-making. There is the lurking fear of China, which is unsurprising in a predominantly Buddhist country. But that is gradually giving way to an even more tangible irritation at India’s clumsy overlordship.
Posted by Broadsword at 16:23

Curious how your writing becomes more balanced, devoid of jingoism when writing for the SCMP compared to the Business Standard.
You knew perfectly all along last year, it would have been crazy for an attack to cut off the corridor come via the Chumbi Valley and the 80km of forest and alternatively via the heavily defended Sikkim road. But you took the government line and spun their yarn about the Chinese threat.
I made a comment at that time and had asked what was the point of Doklam when there was no threat?
From the Chinese point of view Doklam overlooks Chumbi making Chinese development around Yadong vulnerable to enemy Artillery, therefore China needs to prevent India from occupying Doklam during war and you knew that too.
The Chinese intend at some stage to bring a railhead at Yadong in Chumbi and connect up Bhutan via an A class road.
I WILL GO EVEN FURTHER
If Chinese relations were good with India a railway can be built along Chumbi valley following the Torsa river valleys to where it becomes the Ghargharia river and connect the railway to Bangladesh. This is the most easy and viable route to connect by rail Bangladesh sea port to Tibet.
But we Indians unlike the Chinese lack vision.
We think in India, everything to do with China is a zero sum game, this thinking goes well with the current politics of hate in India.
Ultra nationalists will not get us Indians anywhere.
Both China, India, Bhutan and Bangladesh can move towards mutual prosperity by developing infrastructure, communication and trade in the region.

A biased post. smatterings of tactical data and dollops of assumptions. Ajai shukla playing to the chinese gallery. cheap.

The problem with Bhutan is that it has no serious friends outside of India. It has long alienated its closest neighbour Nepal by refusing to allow the Bhutanese citizens of Nepalese origin to get back to their country and they continue to langush in Nepal's refugee camps for nearly three decades now. So, Bhutan owes India a lot for it, because the latter helped her by forcing these victims of Bhutan's ethnic cleansing to move on to Nepal. So, Bhutan does have this historical baggage of compulsion to obediently listen to India whether it likes or not. But still there is a thing or two Bhutan can learn from Nepal about dealing with hegemonic India. For instance, India used to have their security forces stationed across Nepal's border with China. But then, King Mahendra forced India to withdraw them long ago. Now that Nepal is connected to China by roads and many more are being constructed, they drastically reduced Nepal's dependence on India with the result that the Indian leaders and Babus have now become friendlier and more respectful while dealing with Nepal. Bhutan should better learn from Nepal how to make it happen also in her own case. But in order to restore cordiality between the two countries, Bhutan must allow its citizens languishing in Nepal return to their homeland with dignity. .

When you level allegations of jingoism and inconsistency, at least have the moral fibre to do so under your own name, and not hiding behind an Anonymous label.

How exactly have you concluded that this SCMP article is in any way different from what I've written for Business Standard earlier. Have you even read what I wrote for Business Standard? Or, safe behind an Anonymous tag, you're just shooting from the hip without regard to fact?

Here is what I wrote for Business Standard on 19th July 2017, when the Doklam face-off was underway: http://ajaishukla.blogspot.com/2017/07/doklam-faceoff-motives-stakes-and-what.html

In what way does it play up the "threat" to the Siliguri corridor? I am just as dismissive of that threat in the July 2017 Business Standard article as I am in the August 2018 SCMP article.

Get your facts right, chum. And get yourself a real name!

I stand corrected
I got my facts wrong about your position on Doklam I have read:
http://ajaishukla.blogspot.com/2017/07/doklam-faceoff-motives-stakes-and-what.html
and I am wrong.
Amidst the atmosphere of jingoism of 2017, you quite rightly went against the media consensus and wrote in the Business Standard that the Chinese incursion in Bhutan was no threat to the Siliguri corridor.
You have been balanced and consistent right through, in SCMP and Business Standard. .
The Business Standard is fiercely independent and its absurd of me to accuse you or for that matter, any of your colleagues like your admirable Mihir Sharma of jingoism, or spinning the government yarn.
I admire your own prodigious output of articles and the hard work and the painstaking research it takes to bring the inside defence stories to your readers.
Those many readers who follow you do so because they are aware that you are the amongst the most prolific and gifted of writers, your many contacts in the defence establishment have acted as a superb conduit for information for your readers.
My above comment cast aspersions on your credibility and if that was true even in the slightest I would not be apologising. You have never been of those who are jingoistic or to take any government line in opposition to the facts, indeed your writings show you to be the very opposite, therefore not only was my comment untrue and unfair but to the many readers of this blog it would have seemed dishonest.
You quite rightly pointed out that my comment is more of a reflection on myself than you and moreover was made behind the safety of an anonymous handle, which speaks volumes of my own credibility.
I was shooting from the hip, next time I will shut up and think before commenting.

“We do not want a situation where there is a new version of colonialism happening because poor countries are unable to compete with rich countries,” Mr. Mahathir said on Monday at the Great Hall of the People in Beijing after meeting with Premier Li Keqiang.

Wow! I'm blown away by the fulsomeness of your apology. It's not often that someone is big enough to offer a real, unconditional apology.

You have done that. I accept without hesitation. And I hope you continue to visit Broadsword. I have never played to the galleries and I can assure you I never will.

Your strategy : Pretend to be India's champ , while " innocuously " raising several
doubts about India and its strategy.

How much did you get paid for this subtle switch? Sickening.

Had been following your articles in Business Standard ever since they started
publishing them, but no longer.

Shocking and saddening how an ex army man could sell his soul.