Mohan Bhagwat is right. And the defence budget indicates why the army is not ready for war!

Mohan Bhagwat, the chief of the Rashtriya Swayamsevak Sangh (RSS), was on the button when he declared on Sunday that, if war broke out, the military would not be ready for at least six to seven months. The RSS chief did not mention that those months would fly past in emergency procurement of weaponry for the army, probably at usurious prices. And he was laughably naïve in boasting that the RSS could fill the gap while the army prepared for operations. Yet, Mr Bhagwat perceived the worrying lack of defence readiness, even though it apparently escapes those whose primary responsibility is the defence of the country — Prime Minister Narendra Modi, his defence minister, Nirmala Sitharaman, and her predecessors, Arun Jaitley and Manohar Parrikar. The situation was no different under the previous government.

That the military is unprepared for war is no secret. Beyond the political bluster, threats from generals and warmongering from television warriors, this is evident from plenty of thoughtful commentary, and from a conveniently leaked letter written in 2012 by former army chief, General V K Singh, to his defence minister, A K Antony, listing equipment shortfalls. There is also a less advertised shortfall in training and alertness that has gifted adversaries with operational successes like in the terrorist strikes in Pathankot and Uri, and in Jammu over the weekend. An editorial in this newspaper noted that the government’s miserly defence allocations are not in sync with its tough posture and with a deteriorating security environment. It concluded that Mr Modi probably does not expect a war.

What are the messages from last fortnight’s defence budget? Seen alongside the last few Budgets, it highlights an unimaginative incrementalism, with each year seeing broadly the same percentage of funds distributed between services and departments, with the absolute allocation gradually rising in tandem with the 6-10 per cent annual rise in the overall budget. In each of the last three years, the army has been allocated 68-69 per cent of the services’ budget, with the navy getting about 12.5 per cent and the air force 19.5 per cent. In the years before that, i.e. 2014-15 and 2015-16, the army got only 64-65 per cent, with the navy and air force getting an additional 2 per cent each. But the grant of One Rank One Pension (OROP) in 2015 and the implementation from 2016 of the Seventh Pay Commission’s salary recommendations disproportionally raised the manpower-heavy army’s requirement for money, at the cost of the navy and air force. The noteworthy point here is that even this unusual shift in allocations was occasioned not by strategic imperatives, but by a perceived political need to raise military pensions and salaries. 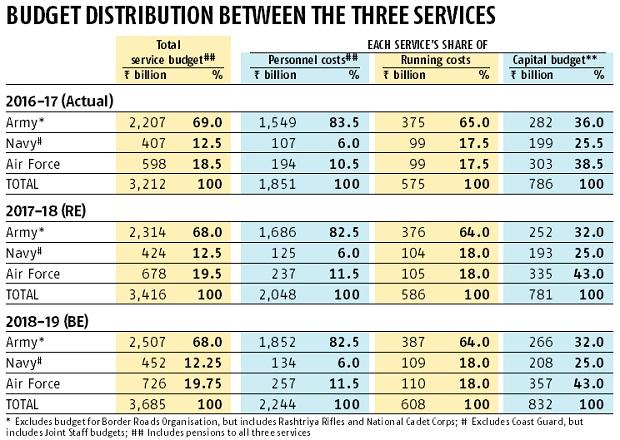 Also evident is the government’s unwillingness to tackle the personnel problem head-on, even though manpower costs are now close to 70 per cent of the military’s total allocation. This  is evident from the exclusion of military pension costs from the declared budget, even though the pension bill is a direct outcome of personnel policies followed by the three services. Excluding pension costs from the defence budget, even though they have almost doubled under the present government from ~605 billion in 2014-15 to ~1,089 billion this year, creates little incentive for the painful shift to a predominantly short-service military where most soldiers serve for five-seven years and then move on without being entitled to a lifetime pension. This government has added simplicity and transparency to the defence budget and factoring pension costs  would be another practical and beneficial reform. My chart incorporates pension costs.

In countries that are serious about defence, each service is allocated funds based on perceived security priorities, operational roles in dealing with those threats, and the equipment, training, and manpower needed to discharge roles. However, the unchanging percentages in the service allocations bear no reflections of the security debates and environment changes of recent decades. There is no funding for the changed approach to warfighting in a nuclearised backdrop that has birthed the Cold Start doctrine — lightning strikes by forward deployed armoured formations to respond to serious provocation by Pakistan. Nor is there any budgetary recognition of the pressing need for additional Special Forces, or aerial strike capabilities as viable retaliatory options — think surgical strikes. The repeated public affirmations about India taking on the role of “net security provider” in the Indian Ocean, or building up coastal security mechanisms along a highly vulnerable 7,500 kilometre coastline, is not validated by any increased outlay in the navy budget, which has in fact shrunk by two per cent in overall terms; and from over 30 per cent of the defence capital budget in 2014-15 to just 25 per cent today. With smaller maritime adversaries like Pakistan increasingly relying on countering India’s more powerful navy through “sea denial”, which means laying mines and prioritising submarine warfare, the naval allocations remain grossly insufficient for India’s planned response — to buy 12 mine counter measure vessels and 16 anti-submarine warfare shallow water craft, torpedoes and sonars for a range of vessels, and build six new submarines in India. Instead, procurement bottlenecks have forced the navy to surrender billions in unspent money: ~25 billion in 2012-13; ~36 billion in 2013-14; ~53 billion in 2015-16; and ~44 billion in 2016-17.

Similarly, an already depleted air force, which must urgently conclude a “single engine fighter” contract to replace ten retiring MiG squadrons with fighters that are built in India, has been allocated a capital budget that would barely cover “committed liabilities”, the phrase for installments on purchases in earlier years, like the Rafale fighter.

Another major dichotomy is the pittance allocated for “Make” projects, which senior defence ministry officials talk up as locomotives for India’s defence industry. “Make” projects involve consortia of Indian defence firms coming together to build complex defence platforms with the defence ministry reimbursing 80-90 per cent of the development cost. Yet, despite its obvious industrial and technological benefits, the government spent nothing under this head in 2015-16; ~2.5 billion in 2016-17; ~ 0.2 billion last year; and has allocated ~1.4 billion this year, a mere drop from the capital budget ocean of ~940 billion.

The government must ensure that defence spending — which will account for 16.5 per cent of government spending and 2.16 per cent of the gross national product in 2018-19, inclusive of pensions — buys bang for this very considerable buck. This will require thoughtless incrementalism to give way to holistic planning and a steady hand at the tiller. With three changes of defence minister in four years, the Modi-government’s entire term will have passed in ministerial learning. The defence ministry cannot afford this game of Musical Ministers.

Budget distribution between the three services

Wow, absolute shambles. Army getting close to 70% of the budget of which its spending pretty much all of it on paying salaries for its 14 corps (37 Divisions) and 1.2 million personnel. This is NOT WW-2 anymore! What is the Army's obsession with personnel numbers? Even with 3% of GDP there will be no modernization this way.

Secretly, I wish the Army is reduced to around 300,000 (yes, a 75% cut in manpower). Or 300,000 active + 200,000 TA. Half the Armoured regiments can be turned into formation reconnaissance regiments. Halve the number of infantry regiments and reduce one rifle company in each that remains. Reduce size of ASC. Finally, no point keeping 37 divisions, have to move to another model with 20 or so divisions. So many ways we can downsize!

This will release so much money to equip and train the Army to Western levels and at the same time give us the opportunity to expand our Navy and air force with supercarriers, more mid air refuellers etc. Critically, more resources will be available for Make projects. Just bite the bullet and cut the Army down to size.

Hello Ducky! this is RSS replying to you.
Every since the HQ at Nagpur issued the historic long pant decision, we have stopped wearing the short khaki, but the Sarshangchalack has told us, along with the long pant comes great responsibility. we are supposed to be proactive, this is why I am bothering to reply to your foolish article.
Mohan Baghwat Sarsangchalak (Affectionately known by us as the Great Chaalak)
meant this.
(A) We know every state ensures that it has a monopoly on the use of violence in order to impose law and order.
(B) We, with our militia merely share this monopoly with the state.
(C) We are Modiji’s army and Modiji is PM, We challenge you to say there is anything wrong in helping the state out as long as you are patriotic.
Besides Militias like ours are nothing new, Herr Savakar drew inspiration from 1930 Germany.
Millions of patriotic people all over India are now embracing the Khaki Pant, the great Chalaak is planning a great future for everyone. (by everyone I don’t mean Muslim).
Wait and see the greatness of India.

PS: you Congress Bas**ard, Don’t you dare write such a bias article against our Great Chalaak ever again.
We know where you live.

There is only one real solution. Improve the tooth to tail ratio.

What else can any govt do? Newsroom warriors, defense analysts want(ed) OROP, new mountain divisions, increase defense capital expenditure. But one needs to understand India is a poor developing country where the government has allocated most of its budgetary expenditure on infrastructure and socio-economic issues and rightly so.

Now you can increase the capital expenditure by raising fiscal deficit from existing 3.3% to 3.5% and grant the extra $5bn(~32,000 cr) to defense capital expenditure. But then it will have a very negative effect on the exchange rates/ rates on new govt issued bonds and not to mention that opposition will be screaming and howling.

And we cannot be like China where they lowered army count by 300,000 to allocate money to capital expenditure. Those are 300,000 jobs lost. Plus China does not have to allocate a lot of its armymen like India does in Kashmir, red belt(Maoist) or NorthEast.

So the only true solution left. Increase the tooth to tail ratio. Rest all is noise to complicate things.