Speculation in Washington about nuclear doctrinal changes by India 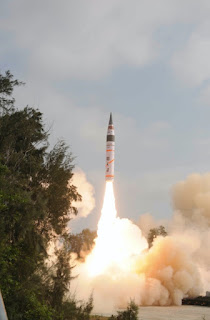 A day after Business Standard reported a new approach in New Delhi strategic circles to India’s use of nuclear weapons (March 20, “Will India nuke Pakistani cities, or go for its nuclear arsenal?”), the influential Washington D.C. think tank, Carnegie Endowment, discussed the same issue --- the possibility of an Indian “first strike” to defang Pakistan’s nuclear arsenal.

At the Carnegie International Nuclear Policy Conference on Monday, a prestigious annual event at which important strategic policy chances are often signalled, a discussion took place on whether India was moving away from massive counter-value retaliation (i.e. nuking towns and cities) to counter-force targeting (i.e. nuking enemy nuclear forces and command structures).

Massachusetts Institute of Technology professor, Vipin Narang, outlined a scenario in which a Pakistan-backed terrorist strike on India killed scores of civilians. New Delhi mobilised its three strike corps and attacked Pakistan. With the armour-heavy 21 Corps bludgeoning along, Pakistan ordered a “demonstration” strike with tactical nuclear weapons (TNWs) --- its short-range Nasr missile batteries --- as a nuclear warning to India. New Delhi’s response, according to traditional Indian nuclear doctrine would then be “massive counter-value retaliation against Pakistani cities, leaving aside how credible or incredible that might be.”

But then Narang sprung the surprise. “There is increasing evidence that India will not allow Pakistan to go first. And that India’s opening salvo may not be conventional strikes trying to pick off just Nasr batteries in the theatre, but a full ‘comprehensive counterforce strike’ that attempts to completely disarm Pakistan of its nuclear weapons so that India does not have to engage in… tit-for-tat exchanges and expose its own cities to nuclear destruction.”

Narang pointed out that this dramatic change did not surface from “fringe voices”, but from former national security advisor Shivshankar Menon in his new book; and former chief of India’s strategic forces command, Lieutenant General BS Nagal, both of whom have questioned India’s traditional “massive counter-value retaliation”.

Narang pointed to a possible “decoupling” of Indian nuclear strategy vis-a-vis China and Pakistan. While retaining NFU and massive counter-value retaliation against China, New Delhi was considering a disarming counter-force strike against Pakistan.

Also in question was India’s longstanding “no first use” (NFU) policy, with Narang pointing out that it had been questioned at least four times already. First, India’s official nuclear doctrine, published in 2003, officially eroded the sanctity of NFU by invoking nuclear use against chemical or biological weapons. Second, in November, former defence minister Manohar Parrikar stated (later clarified to be in his personal capacity): “India should not declare whether it has a NFU policy”. Third, General Nagal, in his writings questioned the morality of NFU, asking whether it was possible for India’s leadership to accept huge casualties by restraining its hand well knowing that Pakistan was about to use nuclear weapons.

Fourth, Menon undermines NFU’s sanctity with this paragraph in his book: “There is a potential grey area as to when India would use nuclear weapons first against another NWS (nuclear weapons state). Circumstances are conceivable in which India might find it useful to strike first, for instance, against an NWS that had declared it would certainly use its weapons, and if India were certain that adversary’s launch was imminent.”

Said Narang at Carnegie: “Indian leaders can disavow all of this as personal opinions, but when a sitting defence minister, former Strategic Forces commander, and highly respected NSA all question the sanctity of NFU, it all starts to add up.”

Menon continues: “There would be little incentive, once Pakistan had taken hostilities to the nuclear level, for India to limit its response, since that would only invite further escalation by Pakistan. India would hardly risk giving Pakistan the chance to carry out a massive nuclear strike after the Indian response to Pakistan using tactical nuclear weapons. In other words, Pakistani tactical nuclear weapons use [or imminent use] would effectively free India to undertake a comprehensive first strike against Pakistan.”

Bringing these views together, it might not be Pakistan that first resorts to a nuclear strike in South Asia. Rather it could be India, acting pro-actively when it believed Pakistan was about to cross the nuclear threshold.

So far, there has been no reaction from New Delhi. In the past, any questioning of NFU or “massive retaliation” has evoked a swift quasi-official rebuttal.
Posted by Broadsword at 08:17

The danger is it puts Pakistan in a "use them or lose them" position.

Unfortunately, we have a scenario in India where speculation about what the Ex NSA or Nagal think, is a complete wast of time . In the India of today, specialist advice is not worth anything. Only that will happen here as Modi wants, as what he thinks will help his image (my guess). I am not being trivial or irresponsible. Which economist would have EVER recommended demonetisation? If the man can subject the whole of India to what he alone thinks is right ( even if it actually is), it would be wrong to assume he will even think of what NSAs and Strat Force Cdrs think, to decide what to do with Pak.

I think we need a comment from Modi or someone near his level making the point that the next major terror strike could enormously raise the risk of a pre emltive strike. Key question is what us "major?"

@ The Analyst - It would be very wrong to think of a nuclear strike on Pakistan, if some terrorists strike a big one in India. Even if there is a hint of such thinking, India will become pariahs in the world.