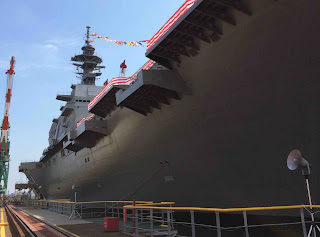 The state-controlled Chinese media has sharply criticised the commissioning of Japan’s powerful new warship, which has the same name --- Kaga --- as one of the Imperial Japanese Navy’s aircraft carriers in World War II.

The original Kaga, which Beijing’s English language daily, Global Times, terms a “notorious warship”, was sunk by the US Navy in the Battle of Midway in 1942.

With Japanese Ship (JS) Kaga’s rebirth on Wednesday as a “helicopter destroyer”, Japan now has Asia’s only navy with two aircraft carrier-sized warships --- the Kaga and its predecessor, JS Izumo. The 248 metre-long Kaga is larger than the Indian Navy’s recently  decommissioned carrier, INS Viraat.

Additionally, Japan also operates two smaller helicopter destroyers, JS Haga and JS Ise, which are about the same weight class as the “Harrier carriers” that served the Italian, Spanish and Thai navies.

Beijing would also have noted last fortnight’s commissioning of Japan’s eighth Soryu-class submarine --- a massive 4,100-tonne vessel with air independent propulsion that many consider the world’s finest conventional submarine. With 11 older Oyashio-class submarines already in the fleet, Japan would have 23 submarines by 2021, when all 12 Soryu-class vessels are delivered.

Yet, the Japanese government, headed by the avowedly nationalist Shinzo Abe, still calls its navy the Japanese Maritime Self Defence Force (JMSDF). However, with China aggressively enforcing claims to disputed islands and waters in the Sea of Japan, East China Sea and South China Sea, Tokyo is gradually dropping the pretence.

Reuters has reported that JS Izumo will shortly lead a JMSDF naval task force on a three-month tour of the South China Sea, which the news agency terms the “biggest show of naval power in foreign waters in more than 70 years.”

JS Kaga, like its forerunner, JS Izumo, currently has a compliment of just nine helicopters. However, each vessel can embark 28 small, or 14 large aircraft. The helicopter carriers are not fitted with catapults or ski jumps for launching fixed wing fighters, but they could function as aircraft carriers by embarking vertical take-off fighters like the F-35B Lightening II.

Tokyo has a contradictory position on the use of military force. Its pacifist constitution, imposed on a defeated Japan by a victorious US after World War II, explicitly renounces war. It limits Japan’s defence spending to just one per cent of Gross Domestic Product (GDP) and prohibits it from acquiring offensive weapons platforms like aircraft carriers (helicopter carriers are passed off as defensive platforms).

On the other hand, the US today sees Japan as an ally against a resurgent China. Washington backs unapologetically nationalist leaders like Abe, who argue for shedding the US-imposed restraint. When President Donald Trump argued for allies like Japan to bear more of the cost of their defence he was, in effect, arguing for scuppering Japan’s one per cent spending cap.

Yet the JMSDF, despite its spending restraints, is widely considered Asia’s most powerful navy, even beating out China. Even with the one per cent spending cap, Japan has announced a defence budget for 2017 of $43.6 billion, only marginally smaller than India’s $53.5 billion.

Unlike India and China, Japan’s army does not consume the bulk of the budget --- the navy and air force do. In contrast, India’s navy was allocated just 14 per cent and the air force 22 per cent of the defence budget.

Furthermore, Japan’s sophisticated shipbuilding industry, including giants like Kawasaki Heavy Industries and Mitsubishi Heavy Industries, churn out warships fast and cheaply. Japan’s latest defence budget reveals they will build a new Soryu-class submarine for $685 million (India’s Scorpene submarines, less than half the Soryu’s size, cost about the same). Japan is building a 690-tonne, Awaji-class ocean minesweeper for just $160 million, and has budgeted $210 million for a 2,900-tonne Hibiki-class ocean surveillance ship.

For over a decade, the US has cajoled India and Tokyo into closer naval cooperation. Last year, Japan formally became a participant in the annual Malabar naval exercise, making it a US-India-Japan trilateral exercise.

There are bilateral proposals between New Delhi and Tokyo for the supply of Japanese defence equipment to India --- a touchy subject, given Japan’s constitution. On the table is the Japanese maritime sea-plane, the US-2; and the Soryu submarine.
Posted by Broadsword at 07:56

That is wrong statement.

Perhaps you were referring to INS Viraat?

I do not think you can compare indua and japan in defence . Both absolute numbers and break up by service will be different.

Another article from you that is more political than military in content.
You could have written about technical specifications of the ship !

Pray tell me Shooklaw..in what way.Izumo is bigger than Vikram?

"(India’s Scorpene submarines, less than half the Soryu’s size, cost about the same)"

Considering the low labour cost in India and the lack of safety procedures and associated spend on it and all those savings if the costs are equal, then a lot of palms have been greased.

also tell about the submarine grade steel used in scorpene sub or not?

Thanks for pointing out the error... I was indeed referring to INS Viraat. Correction made.

Yes he has referred to Viraat