China’s defence budget up 7 per cent, more than thrice India’s 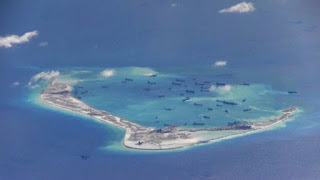 Surprising China watchers who were expecting a double-digit rise in defence spending for 2017, Beijing announced on Saturday its lowest spending hike in recent years --- an “around 7 per cent” increase over the current allocation of 954 billion Yuan (US $147 billion).

Defence analysts assess that China’s actual defence spending is 25-50 per cent higher than the official figure, which excludes what China spends on its nuclear and missile arsenal (called the 2nd Artillery Corps, or the Rocket Force), on research and development and large components of the defence industry.

On Saturday, on the eve of the fifth session of the 12th National People's Congress, a spokesperson stated that defence spending would account for 1.3 per cent of China’s gross domestic product (GDP).

While China’s army demobilises 300,000 soldiers, the PLA (Navy) --- already the largest consumer of the defence budget --- will receive an increased allocation as it muscles up to enforce China’s claims in the South and East China Seas.

The PLA(N) is believed to be completing its second aircraft carrier, and navy-linked analysts in Beijing have stated that China would eventually field 5-6 carriers. Those, supplemented by a rapidly growing submarine fleet, would deter US aircraft carrier battle groups operating near China’s coastline.

The officially-endorsed Chinese newspaper, Global Times, quotes Song Zhongping, a Beijing-based military expert as stating: “As [the PLA] aims to cut 300,000 jobs by the end of 2017, some personnel and maintenance fees can be saved so that the money can be used to establish other arms of the military. From this perspective, a 7 per cent increase is sufficient”.

China’s spending restraint ignores sabre-rattling from Washington, where President Donald Trump told the United States Congress last week that he would push for an defence spending hike of $54 billion rise in 2017 --- a rise equal to one-third of China’s official defence budget.

On February 17, Trump announced at a Boeing aircraft facility: “The best way to prevent war is being prepared. Peace through strength. We [will] build a military might so great --- and we are going to do that --- that none will dare to challenge it.”

Yet, Trump faces sharp criticism at home by defence hawks like Senator John McCain for an inadequate response to the China threat. McCain says the $54 billion increase is insufficient to pay for the US Navy’s planned build up from 274 ships to 350, or for recapitalising an air force that needs to buy the F-35 Joint Strike Fighter in large numbers.

To free up more money, Trump has pushed member-countries of the North Atlantic Treaty Organisation (NATO), which he has accused of “free riding” on US military capabilities, to raise their defence spending to the 2 per cent of GDP that the treaty mandates. Currently, only the United Kingdom spends near that level.

In Beijing today, the 12th National People’s Congress spokesperson pointed to Trump’s NATO demand and asked: “You should ask them what their intentions are.”

Beijing’s planned 7 per cent defence spending hike in 2017 is broadly in step with the 6.7 per cent increase in the Chinese economy last year, which was announced on Thursday.

Economists at JP Morgan expect that Beijing will keep the growth target for this year unchanged at between 6.5 per cent and 7 per cent. Others at investment banking group UBS predicted that the growth target will be set at around 6.5 per cent, according to a statement on Thursday.
Posted by Broadsword at 17:06

India cannot challenge China while her politicians, IAS/IPS/IFS officers, builers, industrialists loot the country and the poor malnourished are exploited.

China has NOT shown any Real aggression towards Vietnam and Taiwan

India is much powerful than Taiwan and Vietnam

Maybe the Chinese have lost the Will to fight

Even on the LAC ; when ever we have confronted them they have gone back

with Indians being killed on regular basis in USA, I don't see or hear the bhakts defending them or the great Moodi calling the big bad Mr. T, to kick his ass.