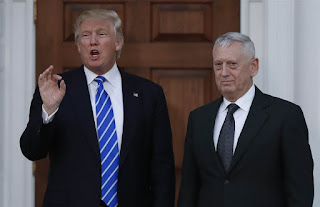 This week, US Defence Secretary Ashton Carter arrives in Delhi on what would probably be his farewell visit to India. President-elect Donald Trump has named Carter’s successor --- retired Marine Corps general, James “Mad Dog” Mattis, so named for his hard-driving ways and macho comments (he instructed his troops: “Be professional, be polite, but have a plan to kill everyone you meet”). The well-respected Mattis seems likely to be confirmed by Congress. Social media wags quip that it is worrying that Mr Trump’s best choice so far is nicknamed “Mad Dog”. Even so, General Mattis might well turn out popular in India. While he would never match Mr Carter’s single-mindedness in driving the US-India defence relationship, the general has personally experienced Pakistan’s perfidy in Afghanistan, when he commanded the first US troops to be deployed there after the Taliban was driven from power in 2001. They say there are no Pakistan fans amongst American soldiers who served in Afghanistan.

With this changeover imminent, it is worth reviewing where US-India defence relations stand after Presidents George W Bush and Barack Obama. Over the last sixteen years, India and America have tussled on several fronts --- trade and climate change amongst them --- but defence ties have marched forward inexorably. US arms sales are up to $15 billion and are poised to rise. Washington has liberalised technology transfer to India, with most requests now granted without question. There are the first green shoots of joint development projects. The two militaries train together and, despite New Delhi’s public repudiation of shared operational planning, sophisticated US-India exercises like the annual Malabar series have created a workable capability to operate jointly in any crisis in the Indian Ocean or South China Sea. Discussions between the two countries in a “joint working group” on aircraft carrier technology are inevitably aligning India’s technology choices for its next indigenous aircraft carrier, INS Vishal, with American technologies and systems now on offer. The aircraft carrier, once a powerful symbol of Washington’s coercion of India after the USS Enterprise sailed into the Bay of Bengal on a gunboat diplomacy mission in support of Pakistan at the height of the 1971 war; is now the symbol of US-India cooperation.

Moreover, with Japan now formally included in Malabar, India is engaged with America’s regional alliance partners. New Delhi’s own engagement of smaller littoral states, such as its line of credit to Vietnam for defence sales, signals a readiness to take up its share of the burden of regional security. Perhaps most importantly, Washington’s wooing of New Delhi will not be just a Bush-Obama fad: when the US Congress passes the National Defense Authorization Act of 2017 this week, an amendment relating to India, which is tucked away in the Bill, will bind every US administration to deal preferentially with India as a “major defence partner”.

Yet, strong winds of change are possible, especially if President Trump acts according to various statements (many of them contradictory) that he has made during his election campaign. He has effectively called his allies freeloaders, including Japan and South Korea, and vowed to make them pay for the security that America provides. He has called the North Atlantic Treaty Organisation (NATO) “obsolete”. This could provide an impetus for some allies to go openly nuclear; but then Mr Trump has expressed a preference for a larger number of nuclear states. He has criticised Saudi Arabia and Iran, both deadly rivals of each other, and promised to “tear up” Mr Obama’s nuclear settlement with Teheran. He has declared he can end the confrontation with Russia and be friends with President Vladimir Putin. If Beijing was pleased by Mr Trump’s rough treatment of his Asia-Pacific allies, they would be watching to see whether he will deliver on his pledge to declare China a currency manipulator on Day-1 of his administration, and to level punitive duties on Chinese imports. He has already broken decades of American protocol with a phone call to Taiwan’s president. Mr Trump has called Pakistan “probably the most dangerous” country in the world, which India needs to “check”. However, New Delhi is watching with bated breath for any follow-up to Mr Trump’s conjecture that his “deal-making skills” should be applied to the Kashmir issue. He has already telephoned Prime Minister Nawaz Sharif and, according to Islamabad’s published, but unverified, version of the conversation, called Mr Sharif “terrific”, Pakistan a “fantastic” country full of “one of the most intelligent people”, and declared that “I am ready and willing to play any role that you want me to play to address and find solutions to the outstanding problems”.

Senior US government officials argue, almost wishfully, that it would be unwise to take literally everything that the president-elect said during the election campaign and that governing is very different from campaigning. They could be partially correct. Mr Trump’s fundamental campaign promise --- to make America great again --- syncs, as it has since World War II, with the his public’s expectation that America assumes leadership on global issues. His promise to build up the US Navy does not suggest any retrenchment from the Asia-Pacific. Officials accept there would be some effects --- such as the renegotiation of basing agreements with allies and, perhaps, a name change for the “rebalance to the Asia-Pacific” --- but no tectonic geopolitical changes. “It will be a learning curve for the new administration and we have our work cut out so that the incoming leadership understands the full scope of facts and the trade-offs involved in making these decisions”, says a senior Washington official.

For now, New Delhi can only watch to see what policies, administration, and which senior officials, emerge from the political churn in America. At the fundamental level of national interest, Mr Trump confronts the same security dynamics and dilemmas that drove President Obama’s Asia-Pacific policy. Chinese power has only grown since then and become more assertive, accentuating the logic behind those choices. Yet, the new administration’s choice of officials, down to the midlevel, will be a key factor in Washington’s engagement with New Delhi. There is unlikely to be another Ashton Carter, heavily invested in the India relationship and aware of its nuances; nor is Mr Trump likely to drive India policy from the White House as personally as his predecessor has done. New Delhi must hope that the “number twos”, and the mid-level officials who effectively shape and implement policy, are India-aware, India-friendly and India-focused --- in the state and defence departments, and the National Security Council. Given Washington’s vitiated political atmosphere, it will probably be some months before confirmed officials are in place.
Posted by Broadsword at 06:35

Do not agree that India is watching anything with "Bated Breath". Indian can go alone all along ans is not in anyway dependent on US for support.If at all anything, the West and the US will need support of India against China in the future. Not the other way around.

Indian should aim to eke out a tangible benefits out of any defence deals and history suggests so far Russia has given better consultancy support at least for ATV project (aka Arihant). Plus if Mr. Trump sticks to his promise of forging a better relationship with Russia, India should then proactively build a new axis formation with both of Russia and US without any need of balancing act.

Shukla, you obviously care what the US does, but I don't think India does. Please stop trying to make this an issue.

I absolutely do care what the US does, and so should you, given that the last time China moved its forces in 1962, your leadership went whimpering to Uncle Sam, begging bowl in hand.

First understand where you stand in terms of comparative capability... and then resort to bluster that nobody except Indians believe or take seriously.