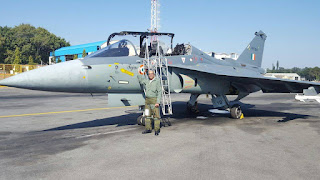 ADA chief, Commodore CD Balaji, after a sortie he flew today in the Tejas Mark I

Prakash, and several navy chiefs who followed him, continued backing the Naval Tejas with funds and personnel, even as the Indian Air Force (IAF) dragged its feet.

Now, ironically, the navy has turned its back on the Tejas, even as the IAF has backed the Tejas with orders for 103 fighters.

Although Balaji is now a commodore and the head of ADA, the admirals have insisted since April that they want to buy 57 foreign fighters instead of the Tejas. These will equip two current aircraft carriers: INS Vikramaditya, purchased from Russia, and INS Vikrant, nearing completion at Cochin Shipyard Ltd (CSL).

On Navy Day earlier this month, navy chief, Admiral Sunil Lanba publicly announced that the Tejas would not meet the navy’s requirements.

Business Standard learns that the navy wants ADA to develop a carrier deck version of the Advanced Medium Combat Aircraft (AMCA), an indigenous, twin-engine, fifth-generation, stealth fighter that is unlikely to enter service before 2030.

This inexplicable volte-face by the last two navy chiefs --- Admiral RK Dhowan who retired in May and Admiral Sunil Lanba who succeeded him --- opens the doors for two global vendors: Boeing, which is offering its F/A-18E/F Super Hornet; and Dassault, which has already sold 36 Rafale fighters to the IAF.

Unexplained by the navy is the future role of its 45 MiG-29K/KUB fighters, which India paid over $2 billion for, and which were to equip the Vikramaditya and Vikrant, with 22-24 fighters on each.

Nor is it clear whether the Rafale and Super Hornet, which are designed and built to be launched from aircraft carriers with catapults, are capable of “ski-jump” launches from the two Indian carriers, neither of which have catapults.

Without catapults, those aircraft will have to be launched with significantly lower payloads of fuel and weapons, especially in India’s warmer environment. The navy has done no studies of the compromises that will be necessary.

With the navy short of answers, Defence Minister Manohar Parrikar has ordered ADA to continue developing the Naval Tejas.

Balaji confirmed to Business Standard that the Naval Tejas development was under way. “ADA believes that we have a good configuration for the LCA Navy Mark II, which will meet the operational requirements of a deck-based aircraft, as specified in the cabinet clearance in December 2009.”

The navy, however, is now demanding far greater capability from the Tejas than what the cabinet clearance of 2009 had specified. At a defence ministry meeting in August, the admirals cited a significantly more challenging operational environment.

Meanwhile the two-phase upgrade of the Naval Tejas continues. In Phase-1, the IAF version of the Tejas Mark I was modified, at a cost of Rs 1,729 crore, into the Naval Tejas Mark I. This involved measures like strengthening the undercarriage for landings on carrier decks and modifying the cockpit to increase pilot visibility. Yet, the Mark I remained predominantly an air force, rather than a naval, fighter.

ADA intends to customise it into a naval fighter in Phase-2, which has been allocated Rs 1,921 crore. Like the IAF version, this will involve comprehensive redesign, including replacing the current General Electric F-404IN engine with a more powerful F-414 engine. But other important changes will optimise the fighter for carrier operations. Weight will be shaved off the undercarriage, which will be accommodated inside a lengthened wing, freeing up space in the centre fuselage for an additional 700 litres of fuel. This will give the fighter an extra 20-25 minutes of flight endurance. In addition, the tail hook will be engineered afresh.

The ADA chief has argued forcefully in the defence ministry, and Parrikar has accepted the need for a step-by-step approach to naval fighter design, rather than attempting a huge technology jump by designing a fifth-generation Naval AMCA. They believe that first designing an optimised naval fighter --- the Naval Tejas Mark II --- would develop capabilities realistically and incrementally.

Fleet air experts note the US Navy’s struggle to build the carrier deck version of the Joint Strike Fighter, called the F-35C. Although America has built carrier deck aircraft for a century, the technology leap attempted in the F-35 created issues that are still being resolved.
Posted by Broadsword at 23:00

I would not call this volte face. A single engined jet was never an optiomal solution for a carrier, specially with 90kn thrust.

We need to continue working on lca navy to gather the knowledge required for a carrier ops.

The ultimate solution is to go for twin engine AMCA-N. We should get the naval AMCA out first before, the airforce version. We made the mistake with LCA, should not be repeated. So it is pointless to work on LCA-2 for navy. A single engined jet is not optimum for carrier ops, unless we have the J-35 engine !

We have a genuine requirement for AMCA-N, compared to airforce AMCA. So I say drop the Navy MK2, continue work on LCA-N and apply lessons on N-AMCA protoype.

The decade old far sightedness of Adm. Arun Praskash translates to obsolescence in the current situation. Tejas does not compare with larger, more potent Gen-4 fighters of today.
Adm. Sunil Lanba is correct in demanding the AMCA for the carriers and use the foreign fighters until then. Let's hope Adm. Sunil Lanba's far sightedness in asking for AMCA does not become obsolete in another decade.

Wonderful writing with great amount of information and analysis. It is a fervent hope that the Navy does not follow the Imported Air Force way.

On this note..a very HAPPY NEW YEAR to you and your family. Hope to see many more writings in the next year. Wish you loads of good health, love, respect, fame and happiness.

Indian navy operated sea harriers so many years.
With MiG-29 in place, LCA would fit nicely, they will need to intgrate sea eagle and a few more anti-shipping armaments.
IAF also operates 2 squadrons of maritime strike Jaguars.
The life cycle improvements of MiG-29 &'LCA need to be taken up jointly with IAF .
It will save our country a lot money, develop in house expertise.
We read that USAF is keeping aside 2 squadrons of C-17 from active duties to save on costs. I think you should write an article on that.
Here we seem to be spending as if there is no tomorrow. What are we upto ?

I personally believe that tejas would be a great fighter and would be a game changer. The naval version would be a great fighter as being an indeginous product there is lot of potential to upgrade and modify the plane. Every plane comes to its best approximately ten to fifteen years after it is inducted. I have no experience in designing such a small plane but tejas has its inherent advantages of very small size , composite airframe and good shape and to add to that it would be the first Indian plane to have a powerful AESA radar which is very difficult to jam and if they magnate to get GaN transducers then the radar would have a very good range and have a clear view to aim accurately and hit targets. Tejas plane can target any plane before that plane can lock it at considerable distances. Only thing that bothers me tejas flying time , range and radius of action has to improve and it must carry double the fuel in its internal tanks so that it carries approximately six thousand liters. The carriers can then safely stay away and launch these planes at safe distances. The problem is with increased fuel load the T/W would fall which can be improved with new GE 414 EPE engines that can produce more that 76 KN in dry thrust and 120 KN with after burner so that can give enough thrust to supercruise and have least possible use of after burner and significant range with good T/W ratio.

The plane in itself would be great to attack an armored coloumn with nag missiles fired from high altitudes and bombs aimed from high altitudes and with five hundred tejas planes with eighty percent operatability would have atleast ten sorties per day per plane would be capable of four thousand sorties in twenty four hours would be a tremendous force multiplier and would ease the burden on other planes for their selected role.

This is a classic case of what is wrong with Indian indigenous design. The Naval LCA has been rejected on the basis of not meeting the most basic of QRs. This means that this problem should have been highlighted years ago. Instead the whole set up very unprofessionally went around other issues which no doubt needed to be tackled like the redesigning of the under carriage for deck operations. The Services woefully lack the knowledge to draw up the correct QRs. The DRDO is too blinkered to make their own. Nobody has an accurate estimate of the project time lines. Most of all the country has to realise that India is in that phase of indigenous technology development where a 'perfect' product cannot be produced because of the inherent lack of experience. The real remedy lies in learning from these issues and setting the course right for future improvements. The right thing to do For Cmde Balaji would be to outline the clear path for the ship borne version of the AMCA so that we see clear progress in future projects. The current LCA N should certainly be produced to highlight production , operation and maintenance issues which will never come to light if programmes are stopped midway. This knee jerk 'start stop' dogging Indian indigenisation must stop and change into a smooth learning curve churning better products every time along the curve.

Thanks colonel Ajay shukla, Even current govt is not your favourite I have seen that Modi and Parikar have taken decision to follows most of which have suggested in previous blogs, hope they do same with making Gen Bakshi CDS . and
I like your push for make and made for india. Till date Navy was great supporter not sure why its changing now and mainly for fighter jets navy or Air force should not be given option to buy from outside. Involve both Air force and Navy in there respective Designs and make it work. if we can manage 30 year old planes we should be able to manage with Tejes. Govt should not spoil the arm forces which we can not make in india , push our scientist or make it like manhattan project , give great salaries , steal ,re-engineer or do whatever possible but use kaveri and LCA . once specifications are approved do not accept change request till the time its complete .

Regardless if whether NLCA sees service or not, it must be completed. There are lessons aplenty to be learned still. And can anybody guarantee that Navy won't want it if it comes of age?

Indian Navy can still use this Naval Tejas until Tejas II version comes out ...
IN can station them in Naval bases and stations and do coastal patrol and it will strike terror in enemies...
A streaking fighter bomber keeps the all kinds of evil away...

India must not root for holy grail all the time...they must reach the altar in steps...

No one makes to senior positions in India without being horribly corrupt and expert in ass smooching. Indian and forces are no exception to other arms of the government. The policy is simple. No matter how junk Indian systems are the forces should be forced to use that. Is the only way to ensure motivation for improving Indian designs.

Can rafale m fly from a stobar, without losing its full capability? If it can, it is the best choice.