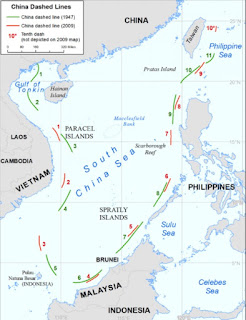 Prime Minister Narendra Modi is preparing to leave for a Nuclear Suppliers Group (NSG) plenary meeting in South Korea on June 23-24, for a last-ditch attempt to gain India membership of that body. Meanwhile, an international arbitration court is finalizing a ruling that would allow New Delhi to strike back at Beijing, if it continues to oppose Indian membership.

Within days, the United Nations’ Permanent Court of Arbitration, located in The Hague, is likely to rule against China in a case filed by the Philippines in 2013. Manila has challenged Beijing’s militant claim over much of the South China Sea. A ruling against China would give New Delhi the opportunity to directly criticize Beijing.

China has claimed the UN court does not enjoy jurisdiction on this issue, which it says should be resolved through bilateral talks. It also claims that 60 countries, including India, support this position. So far, just seven countries have confirmed support to China. India has withheld comment, a restraint it would be in a position to abandon.

While never having criticized China directly, New Delhi has demanded “freedom of navigation” in the western Pacific, especially the South China Sea. Earlier this year, Defence Minister Manohar Parrikar spoke at the ASEAN Defence Ministers Meeting Plus, forthrightly demanding that “freedom of navigation” be respected in these waters. Parrikar struck the same note at the Shangri-La Dialogue in Singapore in May. Prime Minister Narendra Modi, in his speech to the US Congress, went so far as to suggest a “US-India partnership [to] anchor peace and stability from Asia to Africa, and from the Indian Ocean to the Pacific.”

The Philippines has taken before the UN arbitration court competing claims by six countries --- China, Vietnam, Malaysia, Brunei, Taiwan and the Philippines --- in a 3.5 million square kilometer stretch of ocean, stretching from Taiwan to Singapore. China has the most expansive claim, expressed through the so-called “Nine-Dash Line” that it bases on historical domination dating back 2,000 years.

The multiple claims centre on two island chains --- the Paracel and Spratly islands --- and rocky outcrops and shoals near the Philippines called the Scarborough Shoal.

These areas are believed to hold abundant natural resources, including oil, natural gas, minerals and fishing grounds. Half the world’s trade passes through shipping lanes in this region.

Manila has appealed to the United Nations court that China’s claim violates the UN Convention on the Law of the Sea (UNCLOS), which allocates each country an “exclusive economic zone” (EEZ) within 200 nautical miles (370 kilometres) of its coastline. China claims significantly more.

With each claimant country vigorously pursuing its claims, the region has been heavily militarized, most of all by China. Besides the People’s Liberation Army (Navy) and a well-trained and equipped Coast Guard, Beijing provides its fishermen military training for decades, according to numerous press reports from the region.

Meanwhile, the United States, which has separate treaties with Japan and South Korea and has instituted a “rebalance to the Asia-Pacific” to bolster its military presence in the region, has declared its intention to station fighter aircraft in the Philippines.
Posted by Broadsword at 17:35

The decision of the International Court will not be binding, more so since the dispute has not been accepted for 'arbitration' by one of the disputing parties ie China. Also , any decision given by the International Court ,now, before or ever---- cannot be used as a precedent for any other case, unlike the generally accepted principle of jurisprudence in which previous judgements pertaining to similar types of disputes have a large standing. At best , the ultimate decision of the Court can be used to whip up international hysteria about which the Chinese give a damn!!

In your article where does your slanted and sensational heading fit in ?? Where does the heading tell the story??

We should stop buying Chinese company products and ask the Indian ambassador to China to be recalled and cancel all deplomatic ties with them .What is the use of having ties with a country who can't stand us and tries to object or stand against us entering any global treaties or global organisations. I think we buy more goods from them and give them more business than they do.its not only NSG there r so many other things they try and block us.