Boost for “Made in India”, HAL demonstrates new trainer aircraft to Parrikar 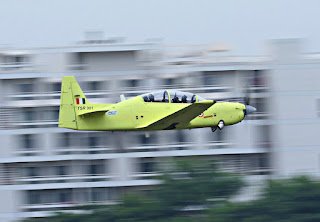 In doing so, HAL has conclusively made its point against a skeptical Indian Air Force (IAF), which opposed the HTT-40 project, blocked funding, and imported an expensive Swiss trainer, the Pilatus PC-7 Mark II, rather than backing the indigenous HTT-40.

“There is no need for [the HTT-40 trainer]”, IAF boss, Air Chief Marshal NAK Browne, said dismissively at the Aero India show in February 2013. “We have the Pilatus PC-7. It’s a proven aircraft. The project HAL plans is from scratch. Our indications are that the cost will be too high. There is no need for all this.”

HAL came back punching. Former chairman, RK Tyagi, and the current boss, T Suvarna Raju, threw their weight behind the trainer project and committed Rs 350 crore of internal HAL funds to the development project. A team of young, talented HAL designers worked without IAF assistance to bring the aircraft to flight.

On Friday, as Parrikar watched the HTT-40 smoothly take off and circle the HAL airfield in Bengaluru, his own support to the indigenous project, and that of his predecessor, AK Antony, were vindicated.

Congratulated the HAL designers, Parrikar said: “The young team has taken a calculated risk and they have flown the aircraft within one year and kept their assurance. The indigenous content on HTT-40 is close to 80 per cent. Almost 50 per cent of the components on HTT-40 are manufactured by private players of the Indian aerospace ecosystem. Here, the role of private players and MSMEs has been significant in the production of parts. The IAF is positive in all these developments”.

Preceding this “inaugural flight”, the HTT-40 had already made its first flight on May 31. Since then, test pilots have expanded its flight envelope, to clear it for flying at 300 kilometres per hour and for 4-G turns. It has validated its glide tests (flying without engines), instrument landing, and demonstrated its ability to land in heavy rain.

Said HAL chairman, Suvarna Raju today: “The project will now go in full throttle as we aim to get the aircraft certified in 2018. Towards this, HAL will be manufacturing three prototypes and two static test specimens”. It is remarkable feat that the aircraft in its inaugural flight carried out low speed pass, a series of turns, high speed pass and short-landing using reverse thrust which is a unique feature available on this engine-propeller combination.”

The IAF has calculated it needs 181 basic trainer aircraft. It has already bought 75 Pilatus PC-7 Mark II trainers and the purchase of another 38 is being processed. That leaves space for 68 HTT-40s in IAF training schools.

For HAL, the challenge now is to certify the trainer by 2018, putting it through a challenging regimen of stall and spin tests.

The advanced systems in the HTT-40 include a pressurised cockpit (which allows flight at high altitudes), “zero-zero” ejection seats (which allow ejection even from a static aircraft), and a state-of-the-art cockpit display with “in-flight simulation” that permits flight instructors to electronically simulate various system failures, allowing the rookie pilot to handle the “emergency”.
Posted by Broadsword at 16:31

It was perhaps the right decision of Air Chief then to go for Pilatus as assuming delivery of certified HAL aircraft by 2018 as projected would have compromise the training gap.

Why is this Govt dragging its feet in bringing back NAK Browne from Norway to face trials and investigations in Pilatus scam?

Also it seems this Govt is desperate to cover up VVIP choppers scam after making lots of noise when Italy tried and jailed their own citizens implicated in this scam.

We need to deal corruption in our armed forces aided by corrupt politicians with a firm hand. When the Govt itself is a thief it'll never initiate any action against those who are implicated in scams.

What are the options of weaponizing/adding instruments to, the HTT-40, to perform.

- CAS for Anti-Armor, Anti Infantry (like a lightweight version the Su-25 Frogfoot or the A-10 Warthog)
- target designation for Field Artillery
- Spotter/target designation for mainstream air-ground jets Jaguars and Migs.
- ISR for DIA and NTRO
- Patrolling for Coast Guard thereby relieving Long Range aircraft off patrolling some closer areas.

Therefore,
Questions are
What is its Maximum Take off Weight ? Will it be capable to carry a 200KG LITENING Targeting POD or some other advanced ISR sensors and cameras.

What is its Combat Radius, loiter time etc ?

It will be a waste if it is just utilized as a Basic trainer air craft. And its weaponization must be considered now when the project is being developed rather then when HAL has already set up an assembly line.

Hearty congratulations to the entire HAL Team for this incredible achievement. Credit also goes to HAL for funding this from its own reserves of 350 crores. The second stage pilatus order should be cancelled and awarded to the HTT 40.

This was only possible with Parrikar at the helm as his predecessor was a inept person. it took somebody to tell IAF that you will have to take this and forget imported stuffs for IAF to fall in line. but HAL must ensure that this project does not go the IJT way and ensure that they complete in time. let's hope for the best. it's truly achhe din for MOD and Indian Armed Forces!!

Credit should partially also go to your consistent coverage and frequent conflicts with Indian Air Force officers over the trainer. Media's forceful involvement ensured that NAK Browne could no hush-hush it aside and the issue blew over nationally.

Therefore, a right cause for you to celebrate !!! Well done !!

Let me take this opportunity to thank you from entire team of HTT 40 for the support you gave to us....we had it all from you... a critic..a supporter...a friend,

The vision less IAF has wasted 3000 Cr down the drain. It is entirely their fault that they did not initiate the replacement to the HPT 32 in time. The entire credit for this goes to the Raksha Mantri who is doing a phenomenal job. It is now time to plan the phase out of the Pilatus by selling them off by 2020. Having them beyond that year will prove to be too costly.

Actually this is become possible because HAL. has recently employed many youngsters. The project manager of HTT 40, Mr. Prashant Singh Bhadoria himself is 36 years old. The young generation should take over the responsibility from the oldies. (they have nothing to offer as such, we have seen it all already)
Sir, kindly enlighten us on IJT and Tejas. There is no news on IJT and Tejas front in recent times.

Shri. Jean Luc, even the Pilatus in service with the IAF is not meant to be weaponized and flown in combat missions. The Swiss company itself prohibited this in the contract with India. So, regardless of whether the HTT-40 can be weaponized or not, its at least as good (if not better) than the Pilatus.

That said, I'm sure there would be no restrictions on the HTT-40 being combat-ready if the need ever arose. There are enough precedents within the IAF itself, to using trainer jets in peripheral combat roles.

Now, its time for the IJT also to succeed.

On the contrary Parriker reduced HTT40 order by 38 bringing it to 68 planes while increasing Pilatus order from 75 to 113. So much for desh bhakti and "make in India".


These links explain why IAF did not trust HAL!
This inspite of long history of operating only indian aircraft as trainers.

There were 19 deaths due to the ab initio trainer. Let us not say IAF did not want indegenious planes.
Please be careful what you write.
As per india today HTT-40 is inspired by Beechcraft T6, that is modified PC-9 ! PC-7 MkII is a downgrade of PC-9 or upgrade of P -7 (depends on how you look at it) Small world.

While congratulating HAL for its quick first flight! let us hope history does not repeat.
IAF needs 181 Basic trainers, can you please state by when ?

I presume many of the people who write comments here are ex servicemen but I am appalled at the lack of knowledge and analysis in some of the comments. The HPT 32 served in the IAF and Navy for over 2 decades before they started dropping from the skies. It is the lack of vision in the IAF and poor marketing acumen in HAL, that the alacrity that has been displayed in the last two years by both these parties was not displayed earlier. If the project was initiated at the right time, around 8 years ago, we would have had an all Indian indigenous trainer aircraft smoothly meeting all the requirements. As typical Indians led by corrupt politicians we hum and haw and doodle till the last moment, kill a few of our young boys in air accidents and then wake up to make panic purchases and waste precious money. This has to stop. HAL today proudly says that they invested 350Cr of their own funds to make the aircraft. Is that not what a vibrant corporate entity supposed to do all the time?? Why do they want to live on borrowed money?? It is time for the HAL top brass to give up their lackadaisical approach and knuckle down to business like true corporate leaders. It is also high time for the top brass of the IAF to come down from their high horse, draft correct QRs in time and work with HAL to make indigenous aircraft instead of engaging them in cat fights like village women do at a well.

A great job and well done from an oldie who thinks that gutting of HF-24 Marut setback Indian aerospace design and manufacturing capabilities immensely...Hope that young guys like you and your team will keep pushing on all programs across HAL...

Best wishes to you and your team in the tough slog ahead to 2018...

I hope that it carries on to IJT too...

This is the way ahead for the DPSUs. Why look at any Service HQs for funding? Use own funds, then the will to succeed will be more, and vast vistas will open up.
Kudos to HAL for this success

Any updates on the IJT since you visited HAL? And also when the LCA will get FOC?? Half the year is over and both of them are long overdue!!!