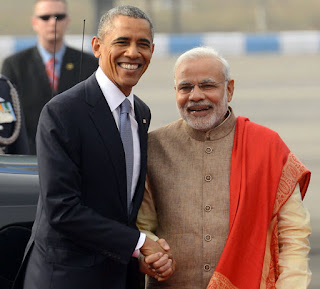 Both Indian and American media gushed over Prime Minister Narendra Modi’s speech to the United States Congress last fortnight. There was potent symbolism in his invocation of American soldiers who had fought and died abroad “to protect the torch of liberty”, just as Indian soldiers had “fallen in distant battlefields for the same ideals”. There was also a powerful message in Mr Modi’s statement that “our relationship has overcome the hesitations of history” and that America is “an indispensable partner.” He even sent out a message to Beijing by declaring that “In Asia, the absence of an agreed security architecture creates uncertainty” and that “A strong US-India partnership can anchor peace and stability from Asia to Africa, and from the Indian Ocean to the Pacific.” But words, even those of Mr Modi, are only a limited substitute for action.

A few days later, one of the people who had listened to Mr Modi’s speech, displayed his impatience by declining to back an India-specific amendment, the “Advancing US-India Defense Cooperation Act”, which requires the American president to “formalize India’s status as a major partner of the United States.” Introduced by senate heavyweights that included Senator John McCain and the co-chairs of the India Caucus, Mark Warner and John Cornyn, this amendment is a companion to an almost identical document, entitled “US India Defense Technology and Partnership Act”, that the House of Representatives, the lower house of Congress, had already passed. The plan was to tag this amendment to the National Defense Authorization Act (NDAA), to save the India clause from the fate of most bills introduced in the bitterly divided US Congress --- which is to stall amidst acrimony, and eventually fade away into oblivion.

However, the irate Senator Bob Corker, who chairs the powerful Foreign Relations Committee, was not willing to let the bill go through Senate. Corker is amongst a growing number of American Congressmen who believes New Delhi continues to spurn Washington’s outreach to India since 2005. These legislators ask: “What has India done so far in response to the US?” Corker also happens to be an active campaigner for ending “modern day slavery”, or the trafficking and exploitation of people from places like Nepal for exploitation as sex workers or domestic servants --- in which India does not look good. So Corker made it clear that on the India amendment to the NDAA, which had a substantial foreign relations component, he would not waive his jurisdiction as the Foreign Relations Committee chief, even though the House of Representatives Foreign Affairs Committee chief had done so. As it turned out, Corker’s opposition was not needed to scuttle the India amendment. Other Senate leaders decided, at a particular stage of discussion, that no more amendments would be passed. So, along with about a hundred other amendments, the India amendment too was set aside. The Indian media, predictably, went to town again. Some sections saw this as a snub to Modi, while anti-US sections tut-tutted about how foolish it was to trust the Americans.

The India amendment will be discussed further and may yet be passed. However, we would be unwise to ignore the building resentment in the US Congress amongst legislators who believe India is freeriding on the defence partnership. New Delhi seems to assume that America’s outstretched hand to India will remain outstretched forever, while we debate at leisure about whether Uncle Sam deserves our trust and friendship.

To be sure, this Indian insensitivity is not just directed at America. Even as New Delhi keeps Washington dangling, Indian diplomats and bureaucrats deal just as disdainfully with Moscow, Paris, London and other capitals. Ironically sensitivity and consideration seems reserved for India’s adversaries, with Foreign Minister Sushma Swaraj explaining carefully on Sunday that Beijing was not really opposing India’s entry into the Nuclear Suppliers Group (NSG); it is only linking India’s NSG membership with that of Pakistan because of its concern for procedure and due process.

Noting such blows to Indian interests, and China’s increasingly undisguised support for Pakistan, Washington wonders what it will take for New Delhi to take a tougher stance against Beijing. US policymakers acknowledge preliminary signs of a stronger Indian policy. A Pentagon official cites Defence Minister Manohar Parrikar’s “forward leaning” statement (code for critical of China) on the Asia-Pacific at the ASEAN Defence Ministers Meeting Plus (ADMM+). This column took note last fortnight of Mr Parrikar’s relatively forthright comments at the Shangri-La dialogue in Singapore last month. Mr Modi’s speech to US Congress also contained statements implicitly critical of China that would have been welcomed in Washington. But this is too little, too late, and patience is running out in Washington. US legislators and policymakers are watching closely for New Delhi’s reaction to the impending verdict of a UN arbitration court on the maritime dispute in the South China Sea between the Philippines and China. The UN court is widely expected to rule in favour of Manila, providing an opportunity for New Delhi --- which normally supports UN bodies --- to speak out against Beijing. China has claimed that sixty countries, including India, supports Beijing’s position that the UN body has no jurisdiction over a bilateral dispute. Only eight of those countries --- which include Vanatu, Togo and Lesotho --- have confirmed supporting the Chinese position. Delhi is one of the countries that has neither confirmed, nor denied, Beijing’s assertion on its behalf.

Also galling to Washington is India’s continued foot-shuffling on signing the three “foundational agreements” for defence cooperation --- a Logistics Support Agreement (LSA) for easy accounting of cross-servicing of defence units; the Communications and Information Security Memorandum of Agreement (CISMOA) for safeguarding cutting edge American-developed communications equipment and a Basic Exchange and Cooperation Agreement (BECA) for exchanging geospatial (or mapping) data. After years on the back burner, this has come alive again, and Mr Modi undertook during his visit to Washington to sign an LSA. To detoxify the agreement, which many had unfairly criticized as an infringement of India’s sovereignty, Washington proposed it be called a Logistics Exchange Memorandum of Agreement (LEMOA). While this will now be signed, BECA should follow, since it contains little that New Delhi can object to, while providing Indian forces access to American maps and data --- which proved extremely useful when the two countries’ militaries conducted relief operations together in Nepal after a massive earthquake. That leaves CISMOA, which is a major roadblock to realizing the operational potential of valuable defence platforms --- like the C-130J Super Hercules special forces transporter; and the P-8I Poseidon maritime mission aircraft --- that India has already paid billions of dollars for. True, CISMOA entails intrusive provisions, such as the stationing of US inspectors alongside CISMOA-covered equipment; and that too at Indian expense. However, if New Delhi and the Indian military are comfortable with stationing US military equipment, distrusting an American inspector amounts to shutting the stable door after the horse has bolted.

Mr Modi declared before the US Congress:, “the constraints of the past are behind us… and the foundations of the future are firmly in place”. It is time New Delhi focused on the present as well.
Posted by Broadsword at 08:36

who is voicing the concern, New Delhi or Washington...?

There is no free ride as far as US Defence Equipment we purchase , We pay for those equipment/arms etc through our Nose and it generates Jobs and Profit for the company and country.

It would have been free ride if these were free doles from US.

We will have to make a choice or become independent like China. this NAM stuff has outlived its usefulness.

I think it was very obvious that modi went to the US primarily to encourage investments. He said whatever the americans wanted to hear.

wrt asia, the US cannot be an ally of both india and pakistan. The americans that and have no problem with betting on pakistan. Indians too have no interest in stifling china as it has no actual returns(pakistan will still get weapons from the US to balance india). In the end, india has chosen not to be someones pawn.

Hello Ajai, I think the world works on reciprocity and action. I cannot understand why India did not sign the LEMOA despite having the text agreed? it would have been a signal that we also act apart from big talk. by the time next 2 agreements are finalised new govt will come in USA and everything will be in cold storage. as for defence acquisition several deals are pending - like P-8i and C-17 repeat order, Javelin etc which should have been progressed in this meeting. So the US is rightfully unhappy with no action from us. simply going for exercises is useless, in fact it is a waste of money as we are doing it again and again. FDI is a welcome step but unless there are decisions on projects there is no future of this relationship. also with such a confident leader at the helm, why should there be hesitation in signing when we do not hesitate in signing deals with Russia left and right? the make in india proposal on IAF MMRCA is another project which will drag on for the next 2 to 3 years and then again govt will change and we are back to square one. simply go through the FMS route and pick as much as you can as after all we need their stuffs more than the other way around. In fact we should also offer A&N to USA as this is the only way to counter China in the short and medium term. what we must extract from them is latest technology like F-35 and access to MTCR, NSG etc. I hope our govt realises sooner than later. I hope you get a chance to interview the RM soon so that such tough questions can be put fwd and clear answers sought :)

Focusing on present also means writing about opening up of defence sector to 100% FDI, which is, by far, a bigger news than the mindless MODI bashing article that you have written.

America is losing patience? That makes no sense. We pay for the equipment, they are now our third largest supplier and they are losing patience. Col,as a former member of the services , how can you justify signing CISMOA?