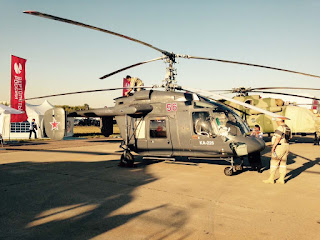 The Kamov-226 helicopter on display at the Moscow Air Show, MAKS 2015

We drive out of Moscow along the Kutuzovskiy Prospekt, the city’s grandest avenue, named after the legendary marshal who halted Napoleon in 1812. Marshal Kutuzov burned down Moscow in a scorched earth campaign, and then destroyed the formidable French Grande Armee (Grand Army) through a frozen, 2,000 kilometre retreat back to France. As President Vladimir Putin drives to work every day from his dacha (country retreat) in Novo-Ogaryovo, 30 kilometres outside Moscow, he passes a Triumphal Arch commemorating Kutuzov’s victory.

We also pass the Park Pobedy (Park of Victory) commemorating the Great Patriotic War against Hitler from 1941-45, in which 27 million Russians died --- the heaviest price any country paid in World War II. This blood-soaked history, a part of Russia’s school curriculum, engenders the stubborn patriotism that has boosted Putin’s foreign policy approval ratings to 85 per cent after he annexed the Crimea last year, and continues to back ethnic-Russian separatists in Ukraine’s Donetsk and Luhansk regions.

However, Putin’s assertiveness has also invited damaging economic sanctions from the United States and the European Union, supported by allies like Australia. These have squeezed the important sectors that earn most of Russia’s money --- oil, banking services and defence exports. Battering the Russian economy further are plummeting oil prices, which are blocking Putin’s 2010 pledge to spend some 20 trillion roubles --- about $650 billion then --- to revamp his ageing arsenal.

After years of defence spending increases, Russia’s 2015 budget has hit a roadwall. Moscow has scaled back plans for buying 500 new warplanes in the five-year period from 2011-2016, as well as the new Armata tank and a host of warships. Earlier this year, authoritative Russian think tank, Centre for Analysis of Strategy and Technologies (CAST), forecast a Russian military spending crisis. “The modern Russian economy just does not generate enough resources to finance the current 2011-2020 rearmament program,” said the report.

That is why Russia --- traditionally secretive on matters relating to defence --- has unprecedentedly invited over 30 journalists (half from China, Vietnam, Thailand and India; and a similar number from Brazil, Argentina, Chile and Mexico) to tour its defence facilities. This includes your correspondent and another from one other Indian newspaper.

Leaving behind the Kuznetsovskiy Prospekt, we wend our way through scenic clumps of forest to the Park Patriot, a vast training-cum-exhibition ground outside Moscow. This is being extensively revamped to hold equipment demonstrations, exhibitions, and exercises with foreign militaries. With fewer orders from Moscow, the Russian arms industry must aggressively pursue more foreign orders.

“We plan to hold an annual military exposition here once the facilities are completed by 2017,” Lieutenant General Rafael M Timoshev, the Park Patriot deputy director tells the throng of journalists.

Yet, increasing exports will not be easy for Moscow. The Stockholm International Peace Research Institute’s 2015 Yearbook, which has studied defence sales trends in the five-year period from 2010-2014, finds that Russia is already the world’s second-biggest arms exporter, with 27 per cent of the export market. Only the United States is ahead with 31 per cent of the market. At third place is China, with 5 per cent of the market, edging out German and France, which also have the same figure, followed by the United Kingdom with 4 per cent.

Delegations from prospective buyer countries are evident at the MAKS 2015 air show, which President Putin inaugurated on Tuesday at Zhukovsky, a Moscow suburb. This year’s version of the biennial aerospace exhibition features 156 global and 584 Russian companies, with the host nation’s aerospace design strength on full display.

Tearing through the skies is the Sukhoi T-50, the Russian prototype of the Fifth Generation Fighter Aircraft (FGFA) that Hindustan Aeronautics Ltd (HAL) will co-develop with Sukhoi when protracted negotiations over the design partnership are finally concluded. But the T-50 appears to be in growing trouble. Today was the first public flight of the aircraft since the last MAKS show two years ago. And both the Russian and Indian air forces are reducing the numbers of aircraft they are committing to build.

The Indian Air Force was initially looking to build close to 220 FGFAs. That was reduced to 144, and uncorroborated media reports have recently indicated that this number could go down to about 75. That is why Russia needs more foreign buy-in.

Also on display is the giant Mi-26T2 helicopter, the world’s largest rotary wing machine. This was developed for the Indian heavy-lift helicopter tender but, after 2012, when New Delhi chose the American CH-47F Chinook, Russia is seeking alternative buyers.

Russia’s traditional reliance on India as a buyer is also evident with the spotlight on its new, light, multi-role helicopter --- the Kamov-226T --- which has been developed for the Indian tender for 197 light utility helicopters, first announced in 2003. Since New Delhi demands that it have the power to operate up to 6,100 metres, the Kamov-226 features a new, more powerful engine. A pair of Turbomeca Arrius 2G1 engines, each producing 580 BHP of power, have replaced the earlier Rolls-Royce Allison 250-C20R/2 engines, which produced only 450 BHP.

So keen is Moscow that India buy this helicopter that President Putin personally took up the issue with Prime Minister Narendra Modi during their summit meeting last year. Russia has proclaimed its willingness for a “Make in India” contract for this helicopter, but the jury in New Delhi is still out.

[Disclosure: The correspondent is visiting Russia at the invitation of Rostec, a Russian state body that promotes the development, manufacture and export of high-tech industrial products.]
Posted by Broadsword at 13:07

Though it is clear that there is friction between India and the Russians on 'joint development' of the FGFA, there is no clear account of the exact areas of disagreement.

I don't consider there is any friction as such. Both Russia and India have their own challenges and financial constraints.One has to be considerate about the exact requirement for domestic consumption and for export. I am delighted that a private concern Reliance has come into play. Technology trransfer or indigenous development will happen, with concern for it. IAF can be a major player in evolution of latest and appropriate Technology.

Such a waste of precious foreign exchange.Why can't this be built by an Indian company,is it so complicated and futuristic?All this money should be going to lift our nation out of poverty, most of it is lost in corruption anyway.Please keep Reliance out of it,they are known for making a hash out of everything and then proceed to loot you.