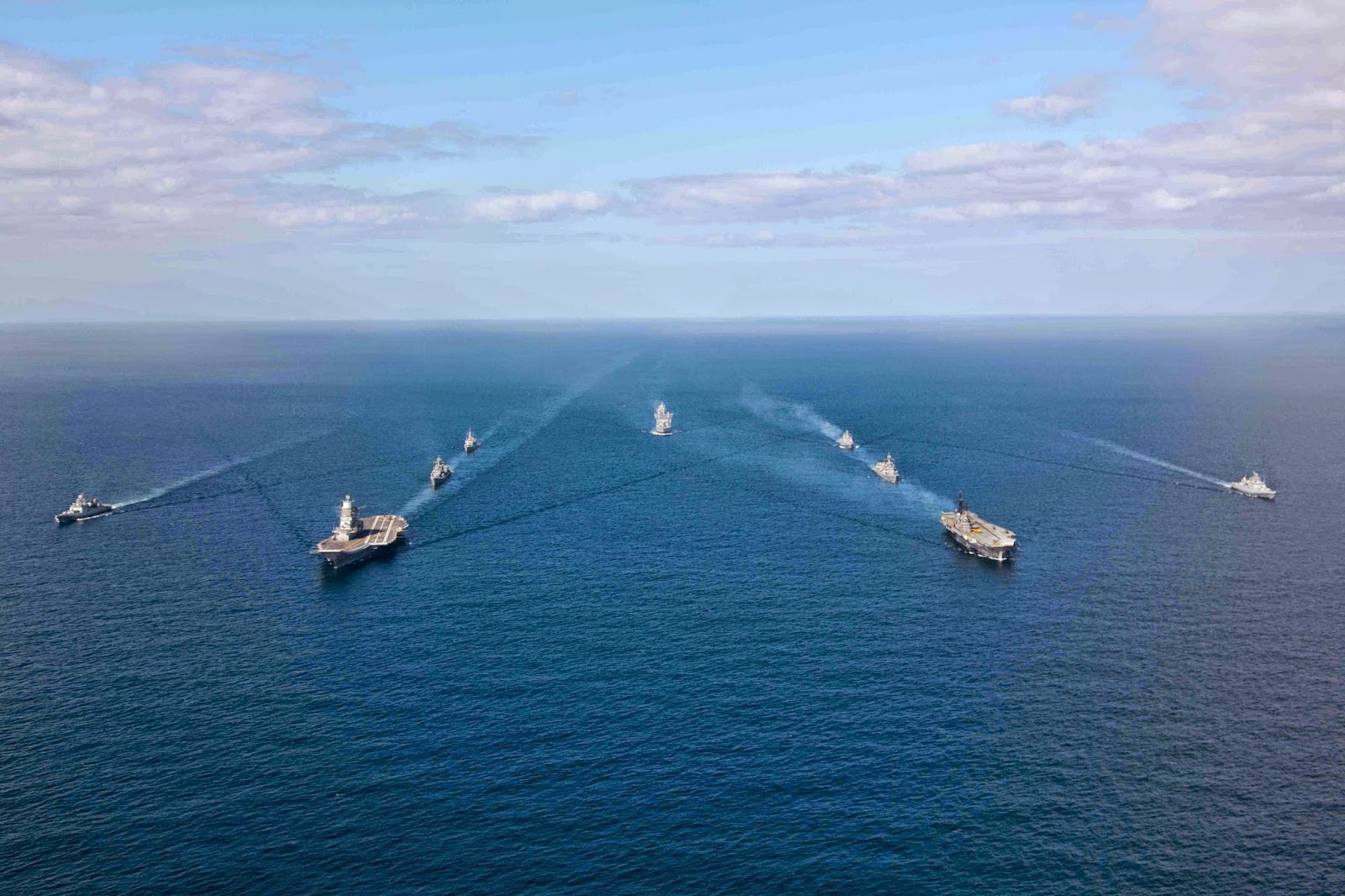 India needs its navy operational now, not just in some distant future

by Ajai Shukla
Business Standard, 16 May 14

The Indian Navy is dangerously unfit for combat, despite having been allocated more than 15 per cent of the defence budget for years. As this newspaper has reported, six new Scorpene submarines being built at Mazagon Dock Ltd, Mumbai, will start entering the fleet in 2016 without the torpedoes that form their essential armament. None of the navy’s 25 capital warships built in the last 17 years has towed array sonar, without which they are dangerously vulnerable to enemy submarines.  Three new Kolkata class destroyers, the first of which will soon be commissioned, have no protection against anti-ship missiles that can be fired against them from air, surface warships or submarines. That is because the eponymous long range surface-to-air missile, or LR-SAM, that was to safeguard them has not yet been completed by an Israeli-Indian consortium that has been developing the anti-missile system for a decade. Likewise, the flagship aircraft carrier, INS Vikramaditya, has been commissioned without the LR-SAM. Several other warships that are defended by the Israeli Barak anti-missile system are at risk because the defence ministry has delayed the procurement of replacement missiles for years. It can be expected that these vessels will be fitted with these systems some day. Yet, until that day, gaping holes in the defences of practically every vessel in the navy make them sitting ducks in the event of war.

As worrying is the failure to conclude a contract for mine counter-measure vessels (MCMVs). Without adequate numbers of these, enemy mines will be released by fishing vessels and dhows to blockade India’s military and commercial ports at the start of a war. The navy requires at least 24 MCMVs to protect Indian naval bases, ports and offshore oil and gas installations; there are just seven minesweepers today. Delay in buying could result in sunken vessels, lives lost and insurance rates going sky-high.

Much of the blame for this situation goes to the defence ministry, which blocks the procurement of even desperately needed equipment as soon as anyone complains --- even if the complaint is anonymous, or from a company that is losing the contract and clearly wishes to derail the process. In some cases such complaints have been rejected by the Central Vigilance Commission and by the ministry’s own independent monitors committee. Yet, infected by Defence Minister AK Antony’s conviction that no contract with even the whiff of controversy should go through, these procurements continue to languish.

Capability gaps also stem from the navy’s hankering for cutting edge equipment that must be developed even as the warship it is meant for is being built. Sensible navies shy away from “concurrent engineering” as this risky process is called, because any delay in developing the equipment --- as in the case of the LR-SAM --- means that the warship is ready, but the equipment is not. It is too late then to retrofit other equipment and that warship remains operationally vulnerable until development is completed.

Over the preceding decade, the ministry’s belief that anything goes, even grave operational shortfalls, has poisoned military culture as well. It must be ensured that the lakhs of crores being spent on national defence result in an operational and ready military, not one that will be ready in some distant future.
Posted by Broadsword at 06:48

Increase the noise now. We have a strong government, now we need a Chairman of COSC.

Its now your and other defence experts' job to impress upon the government to restart reforms and modernisation of the Indian Military.

No one will ask politicians if we lose a war in future, its only the military that will get the blame. So its better to have a bureaucratic fight now for a better MoD and stronger military.

India needs a Chairman and the implementation of the Joint Warfare Doctrine ..NOW.

What every you have mentioned are calculated Risk, that all major navies undertake with consideration of geopolitical situation.

I believe the fault lies as much with the MoD political leadership as it does with the crop of military leaders. As your blog has shown us,time and again, deficiencies in procurement, mis-management/allocation of scarce resources and a lack of strategic thinking permeates across the armed forces.

Yet, can you tell us if you have observed any expression of outrage within the senior levels of the armed forces at this state? I understand that the forces credo does not allow for open criticism, of the Arnab variety. But even the little interaction that senior military leaders give to the press is full of bravado and can-do statements, and lacks any form of honest self-appraisal of the state of affairs.

The lack of political leadership has been matched perfectly by the absence of moral courage amongst the armed forces leadership. Here's hoping the incoming administration changes this atmosphere.

Why not staff MOD with the retired ones from the SSC ?