Henderson Brooks: too many questions 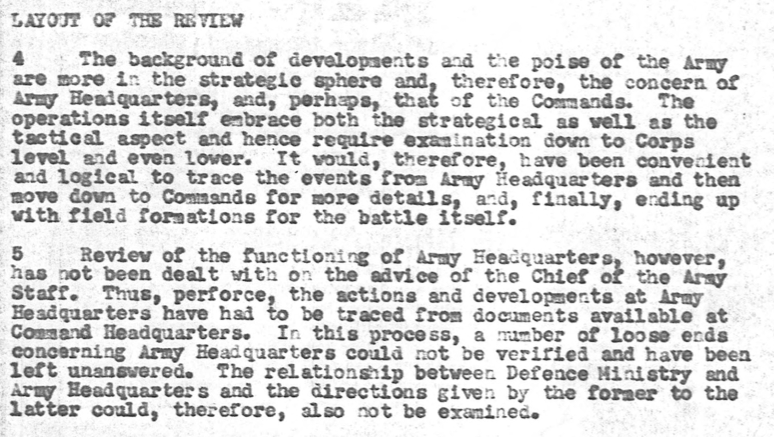 Were this a straightforward world, the recent unveiling of the Henderson Brooks report would have conclusively bared the secrets of 1962, answering the burning question: was the army’s shameful rout at the hands of China due to political mismanagement or was military incompetence largely to blame? Instead the Henderson Brooks report itself appears to be, at least partly, a cover up. The controversy has only become murkier.

Australian journalist and writer Neville Maxwell earlier this month posted on the Internet a hitherto “top secret” report on the military debacle of 1962, authored by Lieutenant General TB Henderson Brooks, a senior Indian Army officer. The so-called Henderson Brooks Report (HBR), which New Delhi has suppressed since 1963, had always been rumoured to contain the real answers. Critics of Jawaharlal Nehru, then prime minister, have alleged for half a century that the report was buried because it highlighted his political ineptitude. It was never explained why the BJP-led government failed to declassify the report whilst it governed from 1998 to 2004, or why the military itself has consistently opposed its release.

Like in many murder mysteries, the corpse turns up on Page 1 of the HBR, with the author making the startling revelation that his hands were tied from the start by the army chief --- General JN Chaudhuri, who was appointed after General PN Thapar resigned in the wake of defeat.  Henderson Brooks reveals that Chaudhuri had issued him “advice” not to review the functioning of Army Headquarters (hereafter AHQ) in his inquiry. In the army, a senior commander’s “advice” constitutes an order that is not given in writing. Significantly, the written orders for the inquiry mention no such restriction.

The author clearly felt that this restriction subverted his inquiry. He notes that it would “have been convenient and logical to trace the events from Army Headquarters and then move down to Commands (the headquarters under AHQ) for more details, and, finally, ending up with field formations for the battle itself.”

A frustrated Henderson Brooks rued that “a number of loose ends concerning Army Headquarters could not be verified and have been left unanswered. The relationship between Defence Ministry (hereafter MoD) and Army and the directions given by the former to the latter could, therefore, also not be examined.”

Why might General Chaudhuri have steered Henderson Brooks clear of AHQ and, by extension, of orders passed by Defence Minister VK Krishna Menon and his MoD officials? We must fish for that answer in the swirling political-military crosscurrents of that period, with army generals carefully disassociating themselves from the discredited General BM Kaul and those close to him --- the so-called “Kaul boys”. Kaul had leveraged his proximity to Nehru and VK Krishna Menon to bypass regular command channels (which were supine in any case) in establishing posts on disputed territory based on a political-intelligence assessment that the Chinese might bark but they would not bite. Chaudhuri knew that an inquiry that examined all the written orders, minutes of meetings in AHQ and MoD, and recorded personal statements from key protagonists might establish the damning truth --- that there were no “good guys” in 1962. If political direction was deeply flawed, General Kaul’s self-serving support for the political-intelligence assumption of Chinese docility led to national humiliation and 3250 soldiers dead. What better way for a new and ambitious chief to forge ties with the political leadership than to confine the inevitable enquiry to tactical issues?

In reflecting upon the possibility of a motivated cover-up, one must consider the personalities involved. General Chaudhuri was an articulate, intelligent cavalry officer about whom contemporaries say; “He was held in high esteem, especially by himself”. Chaudhuri and his wife were active socialites and would today be described as Page 3 people. Contemporaries recall their fondness for Balkan Sobranie cigarettes in stylish holders. Chaudhuri fancied himself one of the intellectual elite; in violation of norms he wrote a newspaper column for a national daily, under a pseudonym, even as army chief. His professional acumen was not impressive; faced with a Pakistani advance in Khemkaran in 1965, he ordered a retreat that would have handed a large chunk of Punjab to Pakistan. Fortunately, Lt Gen Harbaksh Singh, his subordinate commander refused to retreat. This was the chief who whispered to Henderson Brooks not to wield the broom too vigorously.

Then there was Henderson Brooks himself, anglicised in accent, habits and outlook, a general who eventually migrated to Australia --- Neville Maxwell’s country. A competent, if plodding, officer Henderson Brooks lacked the flair and assertiveness of contemporaries like Sam Manekshaw. In “outing” Chaudhuri’s apparently confidential verbal directive to scale down his inquiry, Henderson Brooks must have surprised his chief.

There must also have been discomfiture over the HBR’s criticism of the higher military and political leadership. It pointed out that Krishna Menon’s orders not to keep records of his meetings absolved everyone of responsibility; termed “militarily unsound” the assessments of Nehru favourite, Intelligence Bureau chief BN Mullick; and expressed incredulity at tactical interference by Foreign Secretary MJ Desai. Was the decision to expand their mandate taken by Henderson Brooks himself, or by his co-author, the iconic, Victoria Cross winning Brigadier PS Bhagat?

Yet Henderson Brooks’ ire was directed mainly at the army’s failure. It is hard to argue with Srinath Raghavan who says, “(T)he army also bore an institutional responsibility — one that cannot be attributed merely to a few bad generals. The simple fact is that, from 1959 to 1962, the Indian army’s professional capacities at all levels were put to the test — and found badly wanting.”

Of course this conclusion is incomplete and one-dimensional; the muzzled HBR is as critical of the political direction of that conflict. Ultimately, the HBR’s even-handedness may have caused its suppression. With everyone --- the politicians, the MoD, the AHQ, General Kaul and the field command --- all heavily criticised, everyone has good reason to suppress the report.
Posted by Broadsword at 07:47

This probably was the reason Bhagat was superceded when he should have been COAS.

I think DGMO should take most of the blame since he went along with Gen Kaul and failed miserably despite the claims in his book.His advice regarding the entire operations especially positioning of reserves (and may be offensive air support when things were going wrong) would have had phenomenal impact and turned the tide. A copy of HBR is kept in Military Operations Directorate and he as DGMO would not have liked it to be disclosed. The legacy carries on...

How does Shukla feel able to pass judgment on Generals that retired a few decades before he was born? Where does his assessment of Henderson Brooks as a "plodding officer" come from? This is pure, unadulterated nonsense, with no basis in fact and with no sourcing.
Mr Shukla, I am interested to see if you have the intellectual honesty to publish my comment below:

Shukla consistently seems to apologize for the Congress and for the political class in general, while seldom passing on the opportunity to criticize the uniformed services - without, alas, much in the way of competence to back his claims.

"He was held in high esteem, especially by himself" - perhaps that observation is truer of Shukla than it's supposed target, Gen. Chaudhuri.

This Neville Maxwell guy is the idiot that predicted that India would not survive as a democracy.

Your HBR fixation is “general bashing” born out of your background similar to Raghvan who you quote for support and towards that desire fulfillment you are using HBR as a wind fall. Whereas there are larger issues involved. Look what rational Maxwell gives in making the report public.
http://economictimes.indiatimes.com/news/politics-and-nation/report-on-1962-war-released-to-rid-indias-induced-delusion/articleshow/33085461.cms
Firstlly, he says, he did it to “to rid Indian opinion of the "induced delusion" that India was the "victim of an unprovoked surprise Chinese aggression". While stating that he does not forget what the Chinese did in Aksai Chin :“Nehru and his close advisors selected the alignment themselves and put out new maps showing them as full, formal, final international boundaries...and including an area beyond { what Britain had ever claimed,} the Aksai Chin", the area captured by China in 1962 war.
So what Maxwell is stating that India in 1950s, having gained independence was guilty of fixing boundary without consulting China and England. India did not exist before that and it has no civilizational history. Is that so ??
Maxwell states “without for a moment considering that good sense and good international manners pointed to the need to bring Beijing in to discuss their common border, Nehru and his close advisors selected the alignment themselves”. Here no one asked Maxwell if China ever consulted India before bringing Chinese borders to bear upon India by military aggression and occupation of Tibet? As if India was not a stake holder in that Chinese aggression and as if China was entitled to march wherever they willed ?
Why did Nehru do that? In answer, Maxwell said “ the Indian leaders felt insulted by (late Chinese premier) Zhou Enlai's insistence on negotiations as they felt it impugned India's character as an ancient nation with defined boundaries."
A man like Nehru who wrote “Discovery of India” and his companions who swore by his vision would definitely know what was India, the “Aryavarta” which was defined long back by Manu and others.
Even today the question to be decided is not if Tawang belongs to China or India. The issue is civilizational and whether it is for China to decide what Constitutes India and also if at all it is a matter of negotiation? If China does insist on defining what constitutes India, which it is doing including in Northern Areas of Pakistan, then we see ahead nothing but war a civilizational war.

Focus on bigger issues rather than assuaging your psychological needs of bashing the generals.

Col Shukla ,you have hit the nail on the head.The moot question is whether things have changed over the years.The higher military leadership is as incompetent as it was at that time.

Why is the question moot?

Who will the new Raksha Mantri be and what will it mean for the current COAS?

It would be good for the readers of this blog and this article to go through Admiral Arun Praksh's article in Asian age entitled "Life After Henderson Brooks".

Well, I think that is the way to go about it rather than wasting four blog posts spanking the dead and living Generals. They are not free from the faults but they certainly were not responsible for the national debacle.

There must also have been discomfiture over the HBR’s criticism of the higher military and political leadership.Congress Youth Leader in Bangalore Central