The sinking feeling over Indian navy 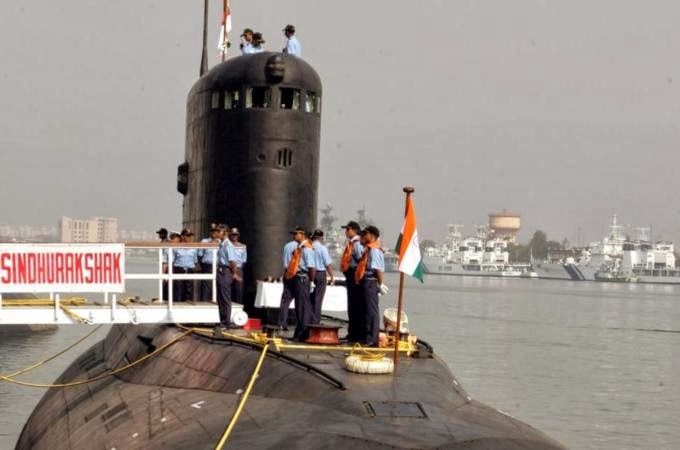 File photo of INS Sindhurakshak, which was sunk last year by an apparent ammunition explosion on board

Since the turn of the century, India has invested heavily in building the navy it needs for dominating the northern Indian Ocean, a crucial maritime highway for the flow of hydrocarbons from West Asia to China, Japan and the Southeast Asian countries; and for the transportation to Europe of merchandise from those manufacturing economies.

With China’s military a looming presence on its Himalayan border with Tibet, New Delhi has long derived strategic assurance from its potential stranglehold over China’s sea lines of communication, or SLOCs, as these maritime highways are termed.

Over the last seven months, however, a spate of accidents involving Indian Navy warships has placed a question mark over this capability. On February 26, the navy chief, Admiral Devendra Kumar Joshi, resigned after an accident in which two officers were killed and five sailors seriously injured while fighting a fire in INS Sindhuratna, one of the navy’s nine Russian Kilo-class submarines.

This was not the first such incident. On August 14 last year, a catastrophic explosion inside INS Sindhurakshak, another Kilo-class submarine that was berthed in Mumbai, killed all 18 sailors on board and sunk the vessel.

The surface fleet has been as accident-prone. In 2011, a frigate sank after colliding with a merchant vessel. Last December, a minesweeper was gutted in a major fire. Just days later, one of the navy’s most modern frigates, INS Talwar, rammed and sank a fishing trawler.

The pressure that was already building on the navy came to a head last week with the submarine fire, resulting in Admiral Joshi’s departure.

The Indian Navy’s extended run of poor form would have come as a surprise to other navies, both regional and global, which accept, even welcome, India’s pre-eminence in the Indian Ocean. The US, Russian, British and French navies, which conduct joint training with their Indian counterparts every year, hold it in high esteem.

As one US official put it recently: “This is still the most reliable force for safeguarding shipping lanes between the Gulf of Aden and Strait of Hormuz on the west, and the Malacca Strait in the east.”

India’s growing maritime authority flows from its geography, with the Indian peninsula protruding like a 1000-kilometre dagger into the Indian Ocean. Its island chains of Lakshadweep, and Andaman & Nicobar, enhance its control of key international shipping lanes that pass through these waters. India has committed money, resources and strategic attention to building up the bristling Andaman & Nicobar Command (ANC), which dominates the nearby Malacca Strait, through which 60,000 commercial vessels transit each year, an average of one every nine minutes. Most analysts believe that the Indian Navy --- with its flotilla of some 135 warships, and its $5.6 billion annual budget  --- can shut down the Indian Ocean shipping lanes whenever it chooses.

Beijing is all too aware of this. Chinese leaders, dating back to Defence Minister Chi Haotian in 1994, have protested that, “The Indian Ocean is not India’s ocean.” But the fundamental determinants of naval power --- force levels and proximity --- suggest that China is some way from being able to challenge India in its own oceanic backyard.

Yet, the Indian Navy’s ability to dominate these waters rests on its ability to operate its warships effectively, something that is now being questioned after the spate of recent accidents.

Excuses that India’s Kilo-class submarines are inadequate or obsolete are patently untrue, since more than 50 Kilo class submarines are operating in navies worldwide, including those of Russia, China, Vietnam, Algeria, Poland, Romania and Iran. Algeria’s two Kilo-class submarines are older than India’s, but have suffered no significant mishaps. INS Sindhurakshak, which sank last August, had seen just 16 years of operational service; and had recently returned from a mid-life refit in Russia that extended its service life by at least another 15 years. A service life of over 30 years is not unusual for submarines. India’s earlier Foxtrot class submarines served in the fleet for over 35 years. Many of the US Navy’s Los Angeles class attack submarines, the mainstay of its underwater force, are 30-35 years old. Nor can it be argued that India’s Kilo-class submarines have outlived their utility; the Indian Navy’s own long term plan for the future fleet, envisages many more years of service for these vessels.

Under heavy pressure from the media and the defence ministry in New Delhi, the Indian Navy has pledged to reexamining all its safety procedures, and to audit its weapons-related procedures. An analysis of all mishaps will now be circulated within the navy so that everyone absorbs the lessons.

Yet, there are complaints from the admirals that an intrusive media has blown the issue of safety out of proportion. Several of the recent incidents, say admirals, barely rate a mention. They argue that the navy’s 160 ships typically clock some 12,000 ship-days at sea annually, in varied waters and weather. In these challenging circumstances, they say, some mishaps are inevitable.

Even if that were true, there are serious systemic weaknesses in India’s equipment procurement that continue to delay the navy’s fleet modernization. Russia’s four-year delay in delivering a recently commissioned aircraft carrier, INS Vikramaditya; and a three-year slippage in building a second carrier in India, forces the Indian Navy to continue operating an aircraft carrier that has been in the water for over 60 years.

Even as India’s older submarines sail into the autumn of their service lives, the navy’s long-term submarine building plan of 1999, which envisages building 24 submarines in 30 years, has not yet seen a single one yet delivered. The first six --- Scorpene submarines, being built by Mazagon Dock Limited, Mumbai --- will join service only in 2015-2018. The next six still await the Indian government’s sanction. A line of frigates and another of destroyers being constructed in Mumbai are 4-5 years behind schedule, even though a report from the national auditor, the Comptroller and Auditor General (CAG), revealed that the Indian Navy possesses just 61, 44 and 20 per cent respectively of the frigates, destroyers and corvettes that it considers its essential requirement. Given these shortfalls, it is hardly surprising that warships are often retained in service long after they should have been scrapped.

It is likely that the shock waves of Admiral Joshi’s resignation will jolt the Indian Navy into taking hard steps towards improving operational safety. The expected entry into service of 45 under-construction warships over the coming years will allow the retirement of older vessels.

Meanwhile, the refining of India’s procurement procedures --- which has been ongoing, even if slowly --- would ensure a steady flow of running spares (like submarine batteries) which will reduce the chances of malfunction-related accidents. The Indian Navy has been reminded that accidents carry consequences for admirals as well as sailors. This might be Admiral Joshi’s most valuable legacy.
Posted by Broadsword at 21:18

There is no justification for Antony indecisiveness in many ongoing purchases. A crass and crazy DM.

THE ADMIRALS ARE ALWAYS HUNGARY FOR MORE SHIPS , SUBMARINES AND AIRCRAFT . MANY ARE BUILT PROCURED WITHOUT SUPPORTING INFRASTRUCTURE FOR MANPOWER, SPARES , LIFETIME OPERATIONAL REQUIREMENTS, REPAIRS OR LOGISTICS BACK UP . 65 YRS DOWN THE LINE , WE HAVE A TRAINING ACADEMY BUT NO ACCOMMODATION FOR ALL OFFICERS AND STAFF RESULTING IN DILUTION OF STANDARDS . JUNIOR OFFICERS AND SAILORS MAY HAVE TO WAIT FOR ACCOMMODATION ANY WHERE FROM TWO TO FOUR YEARS , NO DRY DOCKING AND REPAIR YARDS ADDED, THE EXISTING ONES ARE IN CONDITIONS WHICH REFLECT THE WORK CULTURE OF 70S AND 80S CIVILAN MANPOWER UNACCOUNTABLE AND MILTANT.FINANCIAL POWERS WITH BABUS WHO SIT AND DELAY FILES ALWAYS ON THE LOOK OUT FOR RENT SEEKING. UNLESS REVENUE POWERS ARE DELEGATED TO UNIFORMED OFFICERS WITH COURT MARTIALS FOR CORRUPTION AND QUICK BUILD OF SHORTAGES BASED ON RESEARCH AND SATISFACTION LEVEL , THE ACCIDENTS WILL CONTINUE TO HAPPEN AND VALUABLE LIVES LOST . IN NAME OF INDEGNISATION AND COST CONTROL , SUBSTANDARD MARINE STORES AND EQUIPMENT UNABLE TO MEET THE STRINGENT STANDARDS OF SEA FOR DURABILITY AND SAFETY IS CLEARED BY CORRUPT BABUS WHICH LEADS TO PENELTIES AND LOSS OF LIVES .THE NAVY ON ITS PART MUST CONSOLIDATE AND BREATHE BEFORE ASSETS, EQUIPMENT IS ASSIMILATED . IN ANY CASE IN A COUNTRY WHERE 80%LIVE ON LESS THAN 2 DOLLARS A DAY IT DOES NOT MAKE SENSE TO ASPIRE FOR SUPERPOWER AMBITIONS AS AND UNLESS THE SLUM CULTURE OF WORKERS LIVING IN SLUMS IS NOT REMOVED FROM SHIPYARDS AND DOCKYARDS AND FACTORIES ASHORE THE QUALITY STANDARDS CANNOT BE OF GERMAN , JAPANESE OR SWEDISH RANKS WHICH ARE A MUST AT SEA TO AVOID ACCIDENTS .THIS IS MY EXPIERENCE OF HAVING SAILED ON 14 SHIPS IN NAVY AND CONTINOUS SAILING IN MERCHANT MARINE FOR LAST 14 YRS

As a serving person, i feel Navy is stretching itself on unprofessional works. Right from NWWA to Navyball every manpower is stretched to it's extreme limits.Now these accidents are bound to happen

Much has been written about the MoD, the three services and the CAG as an organization. Indeed the three are responsible. But its amusing that amidst all the 'Op Eds' and 'Cover Stories' in various media forums, not one has mentioned the lack of contribution from a significant working group.

The SCOD or Standing Committe on Defence comprising of MPs from the Lok Sabha and the Rajya Sabha of all major parties has not found one mention. Yet, when an incident occurs, all political parties abuse the ruling coalition on lack of defence preparedness. Such opportunism to score political victories is a shame. The system is in place, but the members have shamed it.

Like most other committees, the SCOD too has been reduced to an excuse where the Chairman gets to enjoy additional perks and privileges while the other members' egos are soothed since they could not make it to a ministerial berth.

The concept of collective responsibility in that all major parties are members of the SCOD has been just brushed aside. True, the MoD can not absolve itself of its tardiness; the SCOD is responsible too.

It would perhaps aid the country if during such incidents, the Chairman and some members of SCOD (or for that matter whichever standing committee is responsbile for a particular incident) is also questioned by the media in public. This would educate the masses as well as force a sense of public accountability in the years to come.