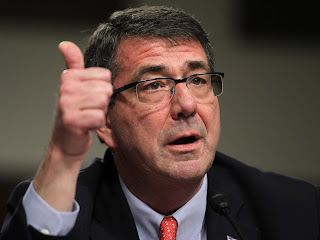 The Pentagon's India man, Deputy Secretary of Defense Ashton Carter is in Delhi for talks today

Defence ties between Washington and New Delhi have progressed dramatically in the conduct of joint tactical exercises, and in training Indian officers in US military establishments. But in the field of defence equipment the two partners remain locked into a “buyer-seller relationship.” India buys billions of dollars worth of US kit, without gaining a technological or logistical advantage by building the equipment in the country. Russian, French, British and German defence companies have transferred technology to set up production lines in India for manufacturing aircraft, tanks and submarines. We have partnered Russian and Israeli companies for jointly developing advanced weaponry. But in buying weaponry from the United States --- such as the A/N-TPQ-37 Firefinder Radar; C-130J Super Hercules and C-17 Globemaster III transport aircraft; and the P8I Multi-mission Maritime Aircraft bought in the last decade --- India has never negotiated with Washington for the technology to build the equipment in India.

This is a paradox, given that the US is the world’s premier repository of advanced military technology. India has complained for years, with some justification, that rigid US export control laws make obtaining technology a lengthy, bureaucratic, frustrating and, all too often, an unsuccessful process. This has kept alive the anti-Americanism that lingers on Raisina Hill, a Cold War afterglow that is fading too slowly.

The logic for reflexively rebuffing American overtures is hard to justify. Today, the US government --- that most notorious of technology deniers --- is practically pleading with New Delhi to let Indian companies partner high-tech US defence entities and build equipment in this country. But India, despite being hungry for cutting-edge defence know how, and keen to emerge from decades of technology denial, is dragging its feet in accepting the American outreach.

US Deputy Secretary of Defence, Ashton Carter, is driving the Defence Trade Initiative (DTI), which has co-chairs with National Security Advisor Shivshankar Menon. Last year Carter proposed five co-production projects, in which US companies would partner Indian companies in manufacturing defence platforms at facilities in India. The equipment built in India would meet not just Indian requirements, but also the needs of American forces and the international market. These equipment offered for co-production includes the MH-60 Romeo multi-role helicopter, built by Sikorsky and Lockheed Martin; the Javelin missile, built by Raytheon and Lockheed Martin; a scatterable mine system; and the Mk-45 127 millimetre rapid-fire naval gun.

True, Washington might have calculated that transferring the technology to manufacture these weapons in India would ensure that the original equipment manufactures (OEMs) would benefit greatly since Indian contracts for its requirements in these fields would almost certainly land in the laps of US companies.

But there are high stakes for both countries in cooperatively exploring the benefits of co-production, especially in on-going tenders like the one India is negotiating with the Pentagon for the purchase of 145 BAE Systems M-777 howitzers. If co-production were transferred to India, New Delhi will almost certainly buy between 400-450 guns for its mountain divisions. For America, transferring the production line makes eminent sense, since only the Indian order is on the horizon, and building 400-450 guns in India would be more profitable than building 145 in the US.

For New Delhi, the advantages of manufacturing the M-777 in India are too obvious to miss. A good Indian company that obtains technology from BAE Systems would quickly absorb it and build upon it, becoming a major player in any future Indian artillery development programme. As the joint venture company builds expertise, it would gradually start taking on research, design and development functions from the parent US-based entity, the employee cost advantage driving this as it has in other fields. Next, setting up a production line in India would ensure that spares, maintenance, repair and overhaul would be reliably available in-country for India’s inventory of M-777 guns for as long as they remain in service. Finally, setting up high tech manufacture in India would result in the absorption of best practices that are currently in short supply. Almost incidentally, it would create skilled employment.

Even more indicative of changing times is the US offer (reported elsewhere in this newspaper today) for US companies Raytheon and Lockheed Martin to co-develop the next-generation version of the FGM-148 Javelin missile with an Indian partner. In making this offer, American intentions remain the same: deepening ties with India, while also improving the prospects of the Javelin in the multi-billion dollar Indian contract for an anti-tank missile for its 350-plus infantry battalions. Washington has undoubtedly taken a cue from Russia’s joint venture with India to co-develop the Brahmos cruise missile; and from Israel, which is co-developing surface-to-air missiles with the Defence R&D Organisation (DRDO).

A co-development project with the US would be a giant step forward. Never before has Washington loosened its hold on advanced technology or co-developed a frontline weapon with a partner. That it has agreed to do so with India is indicative not just of a maturing relationship, but also of the recognition that declining US defence budgets leave Washington with little choice but to share development costs with an ally that is also a big buyer. No country other than India meets these twin-conditions.

New Delhi must make its decisions based on a cold-eyed estimation of India’s strategic and military needs. If India senses benefit in partnering America in co-development or co-production, this should not be turned down just because the US might benefit too. It is time, in the light of changed strategic circumstances, to revisit our long-held perceptions about the US being an unreliable technology partner.

India must diversify its defence relationships and the US has a disproportionately low profile. The air force and navy have already discovered that the US aircraft that were bought recently offer far greater reliability and availability rates than the other aircraft in India’s arsenal. Best of all, US laws and regulations on corruption are so stringent that not a whiff of scandal or wrongdoing has marred any of the recent deals with the US. If New Delhi can overcome its old fears of technology denial, the US-India defence partnership can fulfil its potential.
Posted by Broadsword at 07:57

Don't know if you intended to do this, but the picture you have up is Leon Panetta, not Ashton Carter

The favorite line of American Defense industry is "jobs for locals" & local congressmen stumble over each other offering tax concessions , so military technology transfers to India would be politically costly for any US administration, so i guess India should be satisfied with off the shelf purchases of American military hardware at least for the foreseeable future.

Does India need to test at some point in the future?

If the answer is yes, then stay clear of american equipment.

Does the Indian army really think it can fight a 2 front war, when 1 front is a major non nato ally with american equipment?

Purchasing american equipment is not about technology transfer it is about politics.

Who will stand by you when you have to test or fight a 2 front war. Really america will be there to help.

This man can make all the efforts he likes with pentagon but in the end it is the state department that will call the shots, when stuff hits the fan.
Then you have the 4 year cycle of usa admins changing.

Take a good hard look my friend. That is indeed Ashton Carter and not Leon Panetta even though I have to admit that they look very similar !

Co-development and production shares the burden of the cost of development as it does for production. So there is no reason to believe that a co-developed version of the Javelin would not be produced both in India as well as in the U.S. So this proposal does not necessarily equate to loss or flight of jobs from the U.S to India.

As for the transfer of the Howitzer line from Hattiesburg to Jabalpur or Pune would also not result in any job losses in the U.S perse', since most of the components are manufactured in the U.K and only assembly work and testing is caried out in Hatiesburg. Even at that the assembly line is destined to shut down anyways if the Indian order does not materialize. If there's an agreement to move the line however, it would result in ongoing licensing revenues for BAE and consequently tax revenue for the respective states/countries they are registered / incorporated.

I believe that given the escalating cost of the howitzers and the depreciating rupee it makes perfect sense for the Indians to insist on the transfer of the assembly line and tech to Indian shores.

I fully agree with wargonzo. Congressmen are eager to create jobs in their constituencies, and outright Indian orders shall do that.

So, why is Ashton Kutcher...err...I mean Carter opting for "joint development" ? That's because they want to leverage Indian market for whatever components India cannot make.

Similarly, India will make the propulsion of Javelin -- probably marshaling our learnings from Nag and even the Trishul missile, (which had world-class propulsion). Raytheon will simply provide some hi-tech sensors / seekers and guidance equipment.

About jobs in the local constituencies of Congressmen being lost to India : well, they probably decided that a few thousand jobs can be sacrificed for saving a few hundred billion dollars in their annual defence budget.

How ? Obviously US will import the cheaper Javelin from India. Maybe in the future, they could even import the Tejas -- minus sensors / radar because its cost of patrol operations is so much more cheaper than that bloated F-16.

In the end, DRDO is indeed aiming for self-reliance in ALL aspects from jet-engines to sensors. And rightly so. Godspeed to them under Dr. Avinash Chander.