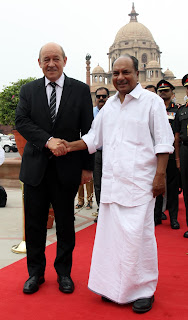 A day after the chief of French aerospace giant, Dassault Aviation, emphasized the criticality of an early Rafale contract with India, French Defence Minister Jean-Yves Le Drian on Friday highlighted the hard strategic decisions imposed by his country’s declining defence budget --- which made India’s early purchase of the Rafale so crucial for Dassault.

Le Drian, on a two-day visit to India, was speaking in New Delhi on the French White Paper on Defence and National Security, issued by Paris two months ago.

The 2013 White Paper recognizes that France has neither the means, nor the strategic will after Afghanistan, to exert influence across the globe. Defence spending has been cut to well below the NATO-recommended level of 2 per cent of GDP, potentially irking France’s NATO allies. The 2,80,000 strong military will be slashed by 34,000 personnel.

Rather than a fringe role in the US “Pivot to Asia”, Paris is adopting a “Euro-Atlantic-African Pivot”, focusing military attention on Europe, West Asia and the African Sahel, its old colonial stomping ground just south of the Sahara.

No major weapons programmes have been cancelled, but several have been pared down, including the French fighter force. Instead of 300 Rafale and Mirage 2000-D fighters envisioned in the 2008 White Paper, France must make do with just 225 fighters. For Dassault, this means fewer orders for the Rafale. The fleet of 294 Rafales originally planned is now a distant memory. The French army and navy have actually ordered only 180 Rafales, of which about 120 have been delivered.

The French government says it will not order more Rafales and that Dassault’s manufacturing line would continues running only if foreign orders came in. For Dassault, the challenge is to bag at least one big foreign contract --- India would be ideal --- before the line shuts down on completion of the French order.

Paris knows that the survival of France’s defence industry --- some 4000 companies --- increasingly depends on exports, given declining defence budgets. Rafale export orders are crucial for giants Dassault, Thales and Snecma and for 500 smaller sub-contractors. The Rafale generates 7000 French jobs, directly or indirectly.

Besides 126 fighters to India, Dassault hopes to sell Brazil 36 Rafales, Kuwait 28, Qatar 24-36, and the UAE 60 fighters. The company has lost procurement contests in Algeria, Greece, Morocco, The Netherlands, Norway, Oman, Saudi Arabia, Singapore, South Korea, Switzerland and the UAE (where it could still win a subsequent order).

Some of these buyers are watching India’s decision-making keenly. Dassault believes that an Indian contract would precipitate orders from others.

But nobody knows better than Dassault that the future of the Rafale is not indefinite. The company is leading an international consortium to develop an unmanned combat aerial vehicle (UCAV) called the nEUROn. As UCAVs become technologically viable, they will increasingly replace manned fighters in procurement calculations.

Given the high stakes for Paris, and for Dassault, in the IAF’s Rafale purchase, Le Drian responded in a measured manner to questions about the delay in concluding a contract. “We have to abide by the procedures of the Indian state. It deserves time to explore, check, ensure that things are rightly done so that two years down you don’t face a blockage or impasse,” he said.

On Saturday, Le Drian will travel to Gwalior to visit the IAF’s three squadrons that fly the Mirage 2000 fighter. In 2011, French company, Thales, bagged a US $2.4 billion contract to upgrade India’s Mirage 2000 fleet, a contract that is currently being executed.
Posted by Broadsword at 11:39

Any idea by when this deal with IAF be inked and how long will it take for deliveries to actually happen. Delays in procurement of such critical hardware put national security at risk. Also do you have idea by when will LCA Tejas get the FoC from the IAF. Official schedules are always delayed. Do you have any realistic estimates Ajai? By the way congratulations on, as always, an insightful post.

Thanks for the announcement. You can have a look at some great Rafale photos:
Dassault Rafale Pictures