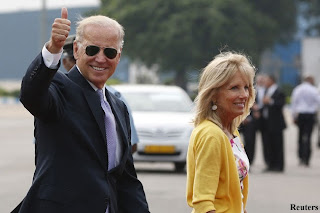 US Vice President Joe Biden’s discussions in New Delhi on Tuesday highlighted the potential of US-India relations, and also its limitations. During meetings with Prime Minister Manmohan Singh, President Pranab Mukherjee, his counterpart, Hamid Ansari and BJP leader Sushma Swaraj, Biden talked up New Delhi’s growing importance to Washington, the need to expand and liberalise trade, and to deepen the defence relationship. The Indian side nodded politely.

Biden, an influential vice president who substantially shapes US foreign policy, set the stage for his visit last Friday, declaring at George Washington University in the US capital that India remains a lynchpin of America’s rebalance to Asia.

“One of the reasons why President Obama called our relationship with India ‘a defining partnership of the century ahead’ is that India is increasingly looking east as a force for security and growth in Southeast Asia and beyond. To us that's welcome news.  We encourage it,” Biden had said.

A key part of that encouragement is the Defence Technology Initiative (DTI), co-chaired by US Deputy Secretary of Defence, Ashton Carter, and India’s National Security Advisor, Shivshankar Menon. The DTI is intended to smoothen the flow of US defence technology to India. But Washington has been discouraged by New Delhi’s apparent disinterest, which Indian officials say stems from Defence Minister AK Antony’s ideological and political resistance to deeper ties with the US.

Last year, Ashton Carter had formally offered Shivshankar Menon the opportunity for Indian defence companies to join hands with US partners in five “co-production projects”, in which US companies would provide the technology and guidance for building five separate weapons in India. These include the Sikorsky MH-60R Seahawk naval multi-role helicopter; the Raytheon/Lockheed Martin FGM-148 Javelin anti-tank missile (less the seeker); the BAE Systems Mark 45 127 mm naval gun; and two other projects. The US had offered that the weaponry built in India would be supplied across the globe.

In the year since Carter made the offer New Delhi has not responded. Neither US Secretary of State, John Kerry, who visited New Delhi last month, nor Biden during this visit, have managed to obtain a response.

Indian defence ministry (MoD) officials suspect that the US offer is motivated by the desire to capture the Indian market for these weapons systems, by getting in through the back door. The US Department of Defense (Pentagon) points out that co-producing these systems with US partners would bring in high technology, upgrade Indian manufacturing and familiarize Indian companies with global best practices. It would also boost Indian defence exports, which currently stand at just $5 million annually.

Biden also discussed the energy partnership, raising the issue of nuclear power generation plants, which Westinghouse and GE are looking to build in India. Beholden to Washington for the US-India Civil Nuclear Agreement of 2008 that brought India into the international nuclear mainstream, New Delhi has earmarked two sites --- one each in Gujarat and Andhra Pradesh --- for US companies. While the companies continue to resist the Indian nuclear liability law, which holds suppliers liable for reactor accidents, Westinghouse is in discussions with the Nuclear Power Corporation of India (NPCIL) for clearing the reactor that it will offer India. Westinghouse, unlike GE, has a reactor that has been cleared by the US Atomic Regulatory Commission, a pre-requisite laid down by New Delhi.

“The word in Washington is that Westinghouse’s lawyers are more comfortable with India’s nuclear liability law than GE’s. That could be because New Delhi has conveyed that the cost of insurance for the vendor’s liability can be loaded onto the contract. On the other hand, GE has long experience working in India and understands the pitfalls better,” says a Washington insider on condition of anonymity.

Biden also reassured New Delhi on a key concern: post-2014 Afghanistan and the role of Pakistan. Officials are not yet revealing what assurances were made, but analysts see Biden’s visit to New Delhi at this juncture is an important signal --- that the US is talking to India at the highest levels about Afghanistan.

On Tuesday night, Biden flies to Mumbai, where he will make a speech on taking forward US-India trade, fair trade rules, and the “strategic convergence” between the two countries on maritime security, according to a senior US administration official.
Posted by Broadsword at 05:28

The indo-US nuclear deal promised a "full" nuclear co-operation. This "full" part was very important and a significant reason why we entered into the deal in the first place.

Accordingly, india got a full waiver at the NSG but that "full" waiver was quickly undone by NSG a few months later.

Siddharth Varadarajan was a vocal supporter of this deal but he too fell out of trust in time. He explains it in his blog here:

For GoI, it is either "full" co-operation or nothing.

The instincts of Indian MoD and AK Antony are correct.

The usa would dearly love to hamstring the Indian defence industry before it gains independent
technological escape velocity. The americans would not want that.

The balancing act is to keep the americans onside enought to get support during conflict times
but otherwise the door should be kept firmly shut.
Pakistanis are very good at playing the americans, maybe there are lessons to be learnt there.

@ Avtar Singh,
You are a man with a vision .... yes, the Americans are just playing with India. Their real friend is, and always will be Pakistan. All they are interested in, is looting India and making profits .... not genuinely supporting India in technology and business.
The two closest allies of the Americans are (1) Britain and (2) Pakistan.... and both want to see India's destruction.
The Americans can not be trusted.

@ Sachin,
Who is Siddhartha Varadarajan any way ... ? ..... Do not give much importance to this mo**er fu**er, a Communist in disguise, that would sell India for a good price.