Submarine missile test a step towards a 4000-kilometer missile 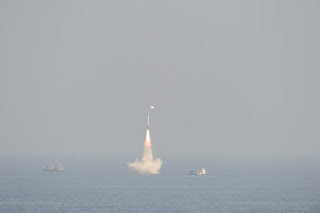 Even in the visually spectacular field of missile testing, the sight of a submarine-launched missile breaking through the surface is a breathtaking one. On Sunday, Defence R&D Organisation (DRDO) scientists cheered excitedly as their indigenous, submarine-launched ballistic missile (SLBM) leapt out of the water, its rocket motor fired soon after clearing the surface, and it soared off in a while plume to accurately strike a target 700 kilometres away.

To nobody’s surprise, the underwater launch went exactly according to plan. This missile, called in turn the K-15, the Shaurya, and now the B-05, had already been launched 10 times from under water and thrice from land. This exacting test schedule is designed for assurance, since this is a missile that cannot afford to fail. Until a better one is developed, this will be the backbone of India’s underwater nuclear deterrence.

That means that it will arm the INS Arihant, India’s first and only nuclear-armed ballistic missile submarine, or SSBN. Tipped with nuclear warheads, the K-15 will be launched from the Arihant only after a nuclear attack on India. New Delhi’s “no-first-use” nuclear policy prohibits the pre-emptive use of nuclear weapons.

That means that India’s land-based and air-based nuclear weaponry, such as the Agni-series of missiles, might already have been destroyed by a pre-emptive enemy nuclear attack. The Arihant, and the B-05 missiles that it carries, are far more difficult to tackle, since they lurk underwater in complete secrecy. The underwater leg of the nuclear triad (land-launched, air-launched and submarine-launched weapons) has always been regarded as the most survivable. It is the ultimate currency of a nuclear exchange.

Going by what the DRDO said about its own test, the B-05 is well up to the task. “The Missile, developed by DRDO, was launched from a pontoon and was tested for the full range. It met all the mission objectives.  The parameters of the vehicle were monitored by radar all through the trajectory and terminal events took place exactly as envisaged,” said an MoD release on Sunday.

The B-05 (or K-15, or Shaurya) is no ordinary ballistic missile. Top DRDO scientists briefed Business Standard that it is not a ballistic missile at all. It could better be characterised as a hypersonic cruise missile, since it remains within the earth’s atmosphere.

A ballistic missile suffers from inherent disadvantages, since it is a relatively crude device, akin to a stone that is lobbed upwards, propelled by a rocket. After the rocket burns out, gravity comes into play, pulling the missile warhead down towards the target. Buffeted by wind and re-entry forces, accuracy is a problem; and, since the ballistic missile’s path is entirely predictable, shooting it down is relatively easy.

The Shaurya has overcome most of these issues. Its solid-fuel, two-stage rocket accelerates the missile to six times the speed of sound before it reaches an altitude of 40 kilometers (125,000 feet), after which it levels out and cruises towards the target, powered by its onboard fuel. In contrast to conventional ballistic missiles that cannot correct their course midway, the Shaurya is an intelligent missile. Onboard navigation computers kick in near the target, guiding the missile to the target and eliminating errors that inevitably creep in during its turbulent journey.

“I would say the Shaurya is a hybrid propulsion missile”, says Dr VK Saraswat, the DRDO chief, talking to Business Standard in 2010. “Like a ballistic missile, it is powered by solid fuel. And, like a cruise missile, it can guide itself right up to the target.”

Making the B-05 even more survivable is its ability to manoeuvre, following a twisting path to the target that makes it very difficult to shoot it down. In contrast, a ballistic missile is predictable; its trajectory gives away its target and its path to it.

The problem with the B-05 (or K-15, or Shaurya) remains its relatively short range of just 750 kilometres. While it could reach major cities in most countries if it were launched from just off the coast, that would necessitate a perilous submarine journey to the vicinity of the coastline. Therefore, the DRDO is also developing a longer-range missile, dubbed the K-4, which will have a range of almost 4000 kilometers. An Indian SSBN that is armed with the K-4 missile would be able to strike most likely targets from a safe patrol location in the Bay of Bengal.

some blogs are stating its range as more than 750 kms. are those reliable? as its naval variant of shaurya, it should be 700 km.

K15 / Sagarika / B05 SLCMs whatever we call it it has certainly given us a leverage to push ahead with operationalizing our nuclear triad.

only thing i doubt is that some reports say with K15 / Sagarika / B05 SLCM with much lesser payload can reach 1800 km, which means over double the current range, is it possible?

i believe the 4000 km k4 missile will be true SLBM and can only be launched from the next series of SSBNs after the current Arihant series SSGNs are launched.

Like always, 750 KM range is with max payload. Lighten up the payload and you go longer and farther.

Do you think the Sagarika is more similar to the Iskander missile or the DF-21D ?

Wasnt the Shourya supposed to have a 1500km range as a land based missile ?

Is it possible to replace the Prithvis with Shourya entirely ?

As it is , the Prithvis are liquid fuelled and useless in a second strike scenario.

"That means that India’s land-based and air-based nuclear weaponry, such as the Agni-series of missiles, might already have been destroyed by a pre-emptive enemy nuclear attack"

Then how come the last resort of the arihant would be safe when the many others were not safe from being penetrated?

Hi Ajay,
Many things just dont add up for this missile.
The claimed 'glide altitude' is 50km? Which is inside atmosphere,but
the problem is that i cant see any fins or wings or any lift
generating surface which can induce 'glide' in the Ballistic
trajectory. The fins are too small and look like attached to first
stage which will drop off at apogee.
After that what happens? How the missile glides or follows a leveled
flight path?

The other thing is 'burnout time'.
Even the 85 tonner ICBM with 10 MIRVs the Peace keeper has less than
3000 seconds of burnout time.
This missile is said to have 'all the way powered' flight?
That means a burnout time of 5000+ seconds?
How can a missile of this size store solid rocket fuel for burning for
such a long time?
Last question is heat sheilding and cooling.
The missile accelerates to mac 6 initially and then goes all the way to mach 7+.
Endo atmospheric flight at such high mach numbers for about 6 minutes?
That will generate enoumous amounts if heat?
How the missile's electroncs survive for that long at such high temperatures?
As the claims are that the missile's flight computer keeps working all
the way to impact point...
Thanks in advance.

Laurels to all the concerned.

The speed of sound is about 330metres per second, or one kilometer every 3 seconds. Something flying at Mach 6 would therefore be doing 2kms per second. Thus a 700km flight would be done in 350 seconds. I wonder how you got 5000+ seconds. By the way, 5,000 seconds translates into about 1hour 25mins.

lets watch and see... the real transformation from... submerged pontoon and harbours... and how fast and effectively can drdo and IN transform... to open seas... oceans...

@Vizagite... dear...
would have heard... prahar... even when we had... prithvis and smerch and pinaka... each system is to address... particular strategic as well as tactical... strike as well as defensive... deterrence as well as force projection... doctrines we develop... keeping with times... threats...

Yes my bad..its not 5000 seconds.
350 seconds as you say...
I was asking about how the missile obtains level flight without any lift generating surfaces...

About Burnout time..we see in the video that 15 seconds is the time when first stage falls off..
I can only guess that the burn rate of both stages is the same..
So first stage has a Burn time of 15 seconds? This stage is 2 meter long,and the second stage is 6 meter long..
So by that assumption the second stage will burn for another 45 seconds?
So total Burnout time for the first and second stages is 60 seconds all together.
The rest of 290 seconds the missile will fly an un powered flight path or Ballistic path...
How can the missile sustain a levelled flight for 200+ seconds?? assuming that the last 90 seconds in when the missile follows a vertical path down to the target.

hi,
Sorry for the typo. A zero sneaked up on me.
360 seconds be the flight time. But rocket motors work for only 60 seconds.
We can assume this by watching the video.
The 2meter long first stage falls off at 15 seconds.
The second stage is 6 meter long so its burnout time may be 3 times thar of first stage or 45 seconds?
Total burnout time of both stages be 15+45=60 second?
The rest of the time the missile flies on momentum only?
How then it aceives levelled flight for so long?
Another thing is that many websites say that the missile has 6 rocket motors?
Any explaination of where and how these 6 motors work in the missile?
Thanks

won't find such... detailed specs and performance... on a weapon system... anywhere... even for tomahawk... forget about others... awesome system...