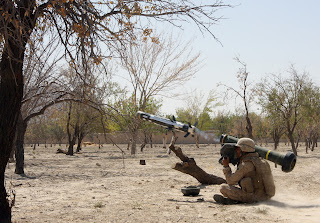 A dangerous flashpoint in US-India relations faces visiting US Secretary of Defense, Leon Panetta, who faces tough questions from Indian officials on Tuesday. The US State Department has slashed India’s request for Javelin anti-tank missiles, offering instead a smaller quantity that Washington sources say is “less than half of what India has requested for.”

Indian MoD officials are furious that Washington, an avowed strategic partner, has pared down India’s requirement of Javelin missiles, even while arguing that defence sales are a cornerstone of the US-Indian strategic relationship.

“This (US reduced offer) is a deal killer. Washington will not dictate the quantity of weaponry we need. This will severely damage the prospects of US vendors in future arms contracts,” a South Block official told Business Standard.

This unexpected rebuff stems from the US Department of Political-Military Affairs, a State Department office that examines the political fallout of proposed US arms sales. Pol-Mil Affairs, as this department is called, often nixes or curtails arms sales because they might “destabilize the regional military balance.”

Neither the US Embassy in New Delhi, nor the Ministry of External Affairs, is prepared to reveal the reason provided by Washington for slashing the Indian request. The MEA and the MoD have not responded to requests for comments.

US Embassy spokesperson, Peter Vrooman, said, “We don’t discuss individual sales. Secretary Panetta looks forward to having an exchange with the Government of India on a broad range of issues.”

Andrew Shapiro, the Assistant Secretary of State for Political-Military Affairs, had told Business Standard, in an exclusive interaction during his visit to New Delhi on 17th April, that Washington had cleared the transfer of technology for manufacturing the Javelin missile in India. Given that readiness to transfer high-end technology, the curbs placed by Washington on the missile numbers remains inexplicable.

The FGM-148 Javelin, built by US companies Lockheed Martin and Raytheon, is one of two anti-tank guided missiles (ATGMs) that the Indian Army is evaluating for its 350-odd infantry battalions. The other is the Spike, built by Israeli company, Rafael. These are both shoulder-launched, “fire-and-forget” ATGMs, which means that they autonomously track their targets after they are fired by a two-man crew.

Both missiles are scheduled to come to India for user evaluation trials later this year. However, the Javelin has already impressed the Indian Army. During joint exercises with the US Army, Indian missile crews have fired ten Javelin missiles. All ten hit their targets.

The US industry, which has heavy stakes in a successful Javelin sale to India, is sharply critical of the State Department for curtailing the Indian request. “Offering a reduced number of missiles will almost certainly kill the Javelin deal; in fact it seems to almost be designed to be so. It seems as if Hillary Clinton herself remains unconvinced about the India relationship and is trying to set a different tone,” complains an industry member.

A key US frustration in the defence relationship has been New Delhi’s refusal to sign three defence cooperation agreements that Washington has pressed for: a Communications Interoperability and Security Memorandum of Agreement (CISMOA); a Basic Exchange and Cooperation Agreement for Geo-spatial Cooperation (BECA); and a Logistics Support Agreement (LSA). New Delhi believes that signing these agreements would put it overtly in the US camp, diluting its “multi-aligned” foreign policy that emphasises strong relations with multiple foreign powers.

There are also growing frustrations in Washington over India’s resistance to allowing US “end-user” inspections of weaponry sold to Indian security forces. New Delhi regards end-user monitoring as a violation of sovereignty.
Posted by Broadsword at 22:23

Sir compare this with your itching and support for F35, same country albeit different product but same end user.

No guess what US can do in case of war. IMHO ditch the bitch(H. Clinton). go for alternative

Ajai,
From your point of view, wont spike help us in dealing the issue?. Secondly Ajai you must be convinced now how F-35 is going to bomb our forces..

ha ha scrap all deal with us go for spike...to simple....

Excellent article.... No one can dictate terms interms of National security.. If they are not selling what we want, then Buzzz offf!!!!!

I am sure there are others who are just waiting to get their share..

I don't really blame the U.S. A country like India should have the capability to design and manufacture most of it's tactical weapons and ALL of it's strategic weapons by itself.Depending on other countries for weaponry gives them a lever to control both our acquisitions and our foreign policy

US India bonhomie should remain just so much bally hoo. Beware the Ides of March.

Good deal ! I wish they had denied the sale altogether.
NAMICA would have then had somechance to stand up to our rose tinted (or should I say brochure tinted) generals instead of having to go through the never ending chai-biskoot trials !

One more point to prove US is an unreliable supplier.

The ban on DRDO is still not lifted after president Obama saying so. Who else do we depend on . The Russians (for whatever quality), the French & the Israelis(baring whatever comes from US)

Col.Shukjla how many JSFs should we order ?

Should we categorize you under anti-national elements?

India should purchase only clearly clean items from USA. Now I understand that why the GOI did not selected the F-18/F-16 which in the overall techno-economical analysis may not be much inferior to the Rafale.

I think the Spike lobby is creating such type of labyrinth, so that it remains the only competitor. Can someone enlighten us as to in which manner the Spike is second to Javelin.

Perhaps, the Army could dangle the F-35 carrot for more Javelins ?

BTW: I know there are JSF versions that have ground attack capabilities. But, is any nation in the JSF consortium planning to use their aircraft for close-in air support ?

I am sorry if I sound too crude.
But this ill-treatment by the US is because American Hindus/Sikhs/Jains are too wimpy. We have plenty of money, but are too timid to muscle our way into American politics. We should follow the Jewish example much more and use our money to get what we want for Bharat.

Dear Sir,
If INDIA is seeking Javeline, this means that our NAG project has failed. Why did we invested so many years, and people's money on NAG, if army is seeking Javeline. Let us now evolve and upgrade our own systems to meet army demand.

if we order 200 at least he would be a happy man not becoz of IAF getting a ac but becoz of his bank balance .
No harm in lobbying for some company go on ... at least we are getting some subject to laugh off .making some one laugh is a noble work .

I think many indians get an instinctive kitch kitch about trusting the US but many cannot put those feelings in words.

IMO, any military purchases from the US are unreliable in the time of war. Some might even call it useless spending.

Instead, bankroll indian defense companies. Get a good HR team to tap the enormous human resource potential. This home cooking has to start some day.

If we have some dignity left, we should not take any of the javelin's and instead evaluate and buy comparable systems from elsewhere.Rightly our defence planners didnot buy MMRCA from U.S as they can deny us spares and maintainance support during a war scenario of such key weapon systems plus state deptt was always against us anyway.

US is known for this.Arm twisters.

Why u guy's attack shuklaji, he is one of the india's credible defense analyst, his views & reports are superb