Photos of the INS Vikramaditya (nee Gorshkov) on sea trials 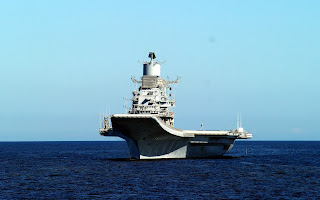 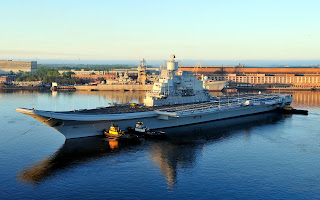 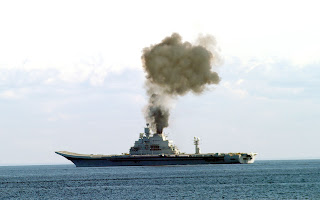 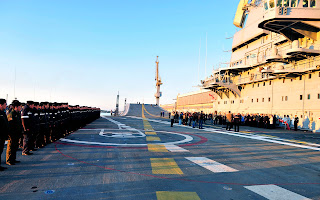 Beautiful!! What a great way to start my day :)

a question about each pic

1. Pic 1-Whats the name of huge cylindrical radar at the top?

2. Pic 2-Whats the huge ship in the background, is that a Kirov class?

3. Pic 3- a. does a carrier spew so much smoke everytime its boilers are fired

b. Isnt the island too big for a carrier

4. Pic 4- Is it true that Barak missiles for defense will be fitted on the carrier later

hope to get answers

When is it docking at Mumbai? Thats all that I want to know.

Hi Joydeep, I will try to answer some of your queries to the best of my ability as a complete layman:

1. Whats the name of huge cylindrical radar at the top?
Ans: Rezistor 4K flight control radar used for localized aircraft guidance, most probably a TACAN equivalent.
2. Whats the huge ship in the background, is that a Kirov class?
Ans: Yes Kirov class awaiting scrapping/refurbishment depending on whom you may ask.
3. Does a carrier spew so much smoke every time its boilers are fired?
Ans: They are out testing the ship, so they may be running boilers to full throttle and stuff, in initial firing yes its normal. Vikramaditya boilers have been change from furnace oil to diesel at Indian Navy's request.
4. Isn’t the island too big for a carrier?
Ans: Yes it’s big, but then Gorshkov was a hybrid carrier/cruiser. The lineage will show. Interestingly some previous proper carrier designs such as the older HMS Ark Royal (R09) had quiet large islands.
4. Is it true that Barak missiles for defense will be fitted on the carrier later?
Ans: That is for an insider to answer. Most probably the system will be scavenged from Viraat when it retires and fitted. EL/M-2221 STGR guidance radars will also need to be installed.

Sirji a lot of pics and videos are out on the net on the sea trials, however a long time has passed and we have not heard news on the development in Kochi shipyards. Well I mean to say is that I am more interested on the developments on the indegenous air craft carrier, please post recent advancements.