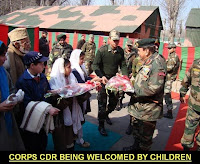 Lieutenant General Ata Hasnain, GOC 15 Corps, at a Jan Sunwai (or Awaami Sunwai) in a village in the Kashmir valley
By Ajai Shukla
Srinagar
Business Standard, 19th Apr 11
The Indian general, five rows of medal ribbons splashing colour on his crisp combat fatigues, greeted the hundred-odd locals gathered at Zainakot, on the outskirts of Srinagar. Handing his baton to an aide he quipped, “haath mein danda pakar kar baat nahin karni chahiye (one shouldn’t talk with a stick in one’s hand).”
Everyone laughed. Lieutenant General Syed Ata Hasnain, the first Muslim officer in two decades to head 15 Corps, which defends the Kashmir valley, had broken the ice in signature style. Four months ago, Hasnain had been commanding a mechanized strike corps in the desert. At which point, army chief, General VK Singh, sent him to Kashmir, trusting him to rebrand the army’s image in a valley simmering with discontent.
“Kissi achhe kaam to dua ke saath shuru karna chahiye (Every good work should begin with a prayer),” Hasnain told the gathering. One of the villagers got up and recited a verse from the Koran, with everyone joining in. Hasnain thanked him, amidst clapping. The locals were interested now. Like all the encounters scripted by the general, this one between the army and the people was very different from the stone-pelting that had consumed this area during the last three summers.
Over the next hour, the general conducted what he calls a “Jan Sunwai”, or public hearing, reminding them that this was not a “durbar”, the traditional army term for when a commander addresses a gathering. “Durbar to Mughalon ke zamaane ka tha, angrezon ke zamaane ka. Mein aapko sunne aaya hoon (Durbars happened during the Mughal era and the British. I’ve come to listen to you).”
Feedback
And Hasnain listened patiently to an outpouring of woes: a suggestion that army convoys be timed for when civilian traffic was low; a greybeard who complained that intelligence sources were using their army links to settle local scores; a youngster studying in Kerala who begged the general to recreate here that student-friendly culture of libraries and tuitions; and a request that former militants who had completed their jail sentences not be stigmatized forever with the label “released militant”. Finally, one elder, who lived next to the house of absconding Hizbul Mujahideen chief, Syed Salahuddin, demanded a road to his village so that he could send a message to Salahuddin that a development project had actually come good.
Hasnain reacted immediately, promising him that road. “You will be able to write to your former neighbour that the corps commander drove to your house on the new road and had a cup of tea with you.” The audience burst out laughing.
During the last two decades, an insurgency-fatigued populace has seen army units and generals come and go, and many promises made and broken. But this new corps commander’s approach of careful listening, and then following up with action are capturing the attention of a growing local audience.
Whether this has “won hearts and minds”, that elusive counter-insurgency objective, it is too early to tell. But it has obviously reduced the security presence, especially in Srinagar, for the last two decades a city of bunkers and guns carpeted by helmeted security men.
As he bids farewell and shakes outstretched hands, Hasnain is careful not to over-promise: “So many of you have lost hope after the last twenty years. Look into your hearts and pull yourselves out of your depression. Always judge carefully who is lying to you and who is telling the truth; things will surely change.” And, with that upbeat message, the general is off.
Hard road
Hasnain’s message resonates across swathes of rural Kashmir. But amongst Srinagar’s disillusioned, politically sophisticated activists, students and lawyers, bitter anger still simmers over last year’s estimated 120 civilian deaths in street protests. It is this urban community that sets the agenda and makes the headlines.
During a day spent talking to students at Kashmir University, Business Standard heard multiple accounts of how every youngster who had been involved in last year’s stone-pelting (the police had video-filmed all the protests) was being arrested by the J&K Police and sent off to jail in Jammu under the dreaded Public Security Act, which allows preventive detention for up to a year.
The police say that only hardened stone-pelters (this phrase is now an established part of Kashmir’s lexicon) are being arrested and in small numbers. The establishment sees stone-pelting as only a change of militant tactics, orchestrated street protests replacing the failed gun. The Kashmiri narrative of unarmed civilians being cut down by bullets is flatly rejected.
Says SM Sahai, Inspector General of Police for Kashmir: “Stone-pelting became an alternative method for the militants after the gun had failed. They began looking at other means of creating disturbance… The police ensure that actions against people who are instigating stone-pelting continues, hence the arrests under the PSA…. For about 1200 incidents of violence [according to FIRs registered last year] our arrests are less than 5000, around 4-5 per FIR. Is that a lot for the kind of violence seen?”
Sahai says that the police had detained 180 people under the PSA, of which 114 remain in custody.
General Hasnain’s challenges are evident: reconciling his intention to treat the Kashmiri people compassionately on the one hand, with the government’s tough approach towards law and order on the other? And secondly, sustaining the army’s well-intentioned engagement of a politically mobilised populace without a credible dialogue between the separatists and the centre.
(Tomorrow: Interview with Lt Gen Hasnain)
Posted by Broadsword at 07:29

Although Indian Army's initiative towards making bridges with people is a good initiative, reduction in force levels and alertness shall not be done, unless the whole Kashmiri mass is disarmed. The good general shall be encouraged to ask people to shed arms and surrender their weapons. Alongwith this, the state governments shall empower the General to refer the surrendered people for employment in state security forces such as of the Mizoram and Nagaland. This will minimize the chance of returning back to militancy, as the Kashmir state has borders with Pakistan. Moreover, the general shall include Indian media to create a positive attitude towards India. A disarming drive shall be launched by Army just similar to the one done to disarm LTTE by IPKF.

Disarming the populace is not a good idea because it will make them cannon fodder for the foreign terrorists. Village militia who are loyal to the Union of India is a must and is the first line against any foreign terrorist.

Anon@00:35: Abid's views are more mature than yours. Seems like Abid knows the ground situation and his surroundings well. Strongly suggest you to checkout our intolerant neighbor Pakistan's experiences with militias, which eventually turns into "law-unto-themselves" phenomena. The best defense against foreign terrorists is timely intelligence. If everybody desiring peace, root out violence seeking individuals from amongst themselves, then there will be lasting peace. I hope the authorities are tuned in to Abid's suggestions. I sincerely hope to see people of Kashmir (be they of any ethnicity or religion) enjoy the benefits of modern developments and enrich their lives with mutual prosperity of the nation. To the militant's, "Violence breeds violence", understand this and you would have solved your problems. God has made all humans equal, so if someone tells you otherwise, then consider such person a devil in disguise, be he/she/it from any religion.