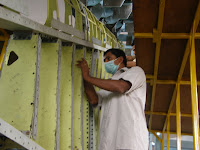 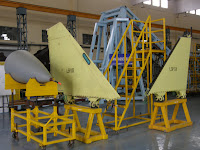 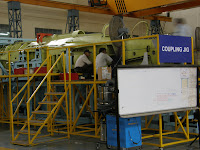 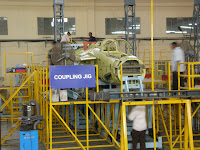 The LSP-4 is seen here on the coupling jig, which is where the front, centre and rear fuselage are coupled together. As you can see, LSP-4 has completed its coupling. Once this is done, the fuselage will be taken to the "foreign objects detection jig", on which the fuselage is rotated. If there are any foreign objects left behind in the fuselage by mistake (e.g. tools, screws, keys, spectacles), they will make a sound when the aircraft is rotated.
Foreign Objects Damage (FOD) --- in which a running aircraft gets damaged because of objects left inside it, or on the runway or taxiway --- is taken very seriously in the IAF... and also in HAL.
The next stage after this is to install the engine and the two wings. The LSP-4's wings are being assembled separately; you can see one of the technician who are doing it. Take a look at the individual struts... that are machined from metal billets. The entire "framework" of the wing is a mixture of metal and composites. This forms the skeleton over which the "aircraft skin" is placed.
LSP-4 will carry and test all the aircraft and avionics systems which have not been fitted on LSP-3. From LSP-5 onwards, all the LSPs will carry the entire range of systems which will be fitted on the production version LCAs.
And LSP-5 fuselage is also under way.
Enjoy!
Posted by Broadsword at 22:41

Keep them coming. Thanks for sharing

Thanks for the pics. BTW any news about the trainer version?

Can I get the License building contract?, after all the requirement seems to be a shed with lots of square pipes with some coolies thrown in.

Hi Ajai,
Ive read your articles over the last 5 years. Your perspective has changed and is welcome.
And you are probably among the very few who can track the LCA's progress quite closely and you are doing a great job at that.
3 years down the line I can already see how this blog, your pics and expeirience can become a bestseller book. Have you considered that.

And please advertise this blog on the newspapers. Youngsters should see this blog and get motivated.

Why just youngsters I feel the whole babudom of MoD, services & DRDO need to be shown the blog and its comments. They need to told in no uncertain terms that their actions are being watched, scrutinized and judged very closely. The Indian tax payer is today quite well informed and gone are the information black out days in the name of national security. Arbitrary decisions and vested interests will not go unchallenged.

anon @ 09 July 2008 11:53 : Please spare us to enlighten us with your divine knowledge crap.Haven't we seen enough of your kind already. There are better places out there to go and crap !

which one will have the fuel stored in LCA ? wings ?

ajai if possible get a detailed account of india's missile defence & phalcon AWACS (preferably with photos). Good job with this one.

Thanks for the regular updates Ajai...

Your blog is indeed very enlightening and gives me the regular dose of emotional high! I agree with cm, you should advertise your blogs a little. I'm doing ym bit and have already added a link to your blog as one of my "favourites" on my blog...

Cheers and keep up the good work.

TIA for trainer pics. The trainer is the next one to watch out for. The last picture was taken a while ago. It was in the advanced assembly stage similar to LSP2. I hope it flies soon.

one minor mistake,
the fuselage is lsp-5. which is seen clearly in third and 4th photo. But good work ajai, apart from the minor problems. Is it not possible for you to get a tripod, or some professional to shoot a photo?

Ajay can you comment on what exactly LSP-4 will incorporate over and above LSP-3. No need to respond if the info is classified.

Please visit Cochin Shipyard and report on the ADS. Navals chiefs and raksha mantri's have been saying that metal cutting is on since 2005 and launch in 2010 with induction in 2013. I don't believe it and would like to see some photos to be proven otherwise.
Thx

No way are you going to get ADS pictures at this point in time. It's one of the Indian Navy's most classified projects.

Will be making a trip to Mazagon Docks at some stage in the next month or so. Hope to have pictures of the INS Shivalik from that visit.

well you can dream cant you? might as well ask for pics of interiors of the ATV :D
Ajai the 3rd and 4th pics are of LSP-5 it is printed on the fuselage quite clearly.

I was thinking of a pic with gleaming metals and stuff.

Is this because of the composites?

anon @ 13 July 2008 21:42: Exactly what looks fugly or whatever ? This is an combat aircraft assembly line not a Leo Mattel Toy Factory. What makes you make such unqualified comments ? Gleaming metal of what ? What "Stuff" ? UFOs ?

lol...pathetic state of indian affairs...they are assembling this plane like its a cycle..
god save india..

pl dont do this its not right to show the work place its can leak many other info .how u got the pic its illegal.pl stop showing pictures of Hangar.if you are a good indian