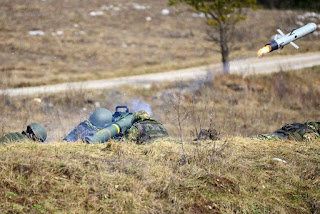 On Wednesday, the Indian Army successfully test fired the Israeli Spike LR anti-tank guided missile (ATGM), which can home in on, and destroy, enemy tanks at ranges up to 4 kilometres.

On Thursday, Rafael Advanced Defence Systems, which builds the Spike, boldly stated: “With confidence in the Spike missile established, the Indian Army may need to revisit their plans” to develop an Indian anti-tank missile.

This is an unusually bold statement, since foreign vendors hoping to do business with the defence ministry usually tread softly around New Delhi’s sensibilities and avoid giving procurement advice.

In January 2018, India had cancelled a $500 million purchase of Spike LR missiles just two weeks before Prime Minister Benjamin Netanyahu was to ink the deal on a visit to New Delhi.Army chief General Bipin Rawat said at that time that the purchase was cancelled because the Defence R&D Organisation (DRDO) was going to develop and supply an indigenous ATGM.

Since the DRDO missile would be ready only by 2022, “the Indian Army procured a limited quantity of Spike LR missiles, so as to meet the urgent operational requirement”, said Rafael in a press release on Thursday.

Two of these ATGMs were fired at Mhow on Wednesday. Witnessed by top infantry generals, including Rawat, both struck their targets.

Encouraged by that success, Rafael now claims the DRDO’s missile will be only a “third generation” (3rdGen) ATGM, while the Spike LR is a “fourth generation” (4thGen) missile.

The Israeli firm explained why its ATGM was better than what the DRDO is developing. “Spike LR is a 4th Gen missile, which [has] fire and forget capability (that does not require the firer to keep the enemy tank in his cross hairs until impact). The missile also has the ability to… switch to a different target mid-flight, should he want to do so.”

Rafael argued that the Spike LR’s inbuilt seeker allows the the firer to engage tanks by both day and night. “The dual seeker adds to the missile’s reliability, already established at more than 90 per cent during the field evaluation by the Indian Army in 2011. As of date, more than 5,000 Spike missiles have been fired so far worldwide, with the overall hit percentage being more than 95 per cent”, claimed Rafael.

India is the 33rd country to have the Spike missile as part of its inventory.

For decades now, the army’s infantry (foot-soldiers) units have been equipped with 2ndGen missiles like the French MILAN, which had a range of under 2.5 kilometres and required the firer to expose himself while firing.

Rafael was required to dicharge offsets worth 30 per cent of that value and to transfer technology to Bharat Dynamics Ltd (BDL) for building 30,000 more Spike missiles in India.

Over the preceding two years, Rafael has strengthened its case by putting in place the tools to manufacture the Spike LR in India, in a joint venture (JV) with the Kalyani Group in Hyderabad. “The JV is capable of manufacturing Spike missiles in India, and will also look at export opportunities from India”, stated Rafael today.

By 2016, Spike LR had cleared user trials and the defence ministry had completed price negotiations. At the last minute, however, the government decided in favour of indigenous manufacture.

Now, with the DRDO programme under way and reportedly making good progress, Rafael has moved boldly to make its case for the Spike.
Posted by Broadsword at 11:38


Sir,
If they are making these missiles in India then why not !! After all DRDO babus ( they are not scientists , they are mostly engineers and who are mostly doing 9-5 jobs. And most of them are not even GATE pass ! ) living on our tax payers money for long ! Last ten years we are giving trials of NAG only ! If IA is satisfied to SPIKE then we should give a try.
Regards

Everything written is not true....

Exclusive: Indian Army's decision to buy 'failed' missiles raises eyebrows
The Army is going ahead with the procurement of Spike ATGM which failed during trails
By Pradip R Sagar April 12, 2019

Spike missiles were not successful when tested....
I believe they ordered now as an emergency situation due to ceasefire escalation and possible war clouds...

The Israelis are resorting to fear mongering amongst the Indian Army. The army should purchase DRDO's missile by 2022, and make it clear that Israel's offering is just a stop-gap arrangement.