Exercise “Tiger Triumph”: US Marines to showcase skills for the first time in India 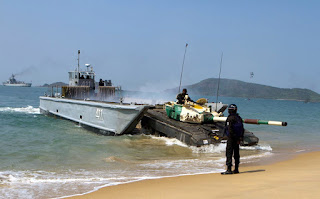 For decades, elite troops of the United States Marine Corps (USMC) have protected Washington’s embassy in New Delhi. On Sunday, for the first time ever, the USMC will showcase its professional skills in India, as the joint US-India tri-service exercise “Tiger Triumph” hits the sea at Kakinada, off Visakhapatnam.

Over the next five days, Indian and American soldiers, sailors, marines and airmen will operate together in a simulated “humanitarian aid and disaster relief” (HADR) situation – jointly providing succour to an Indian Ocean country that has been hit by a natural disaster.

But the HADR scenario is only a convenient backdrop. In fact, the two militaries are honing their capability to work together in an amphibious landing – such as a joint invasion of an enemy coast; or an operation to free one’s own territory that has been captured by an enemy country, a terrorist group, or mercenary force.

Ironically, it was a joint US-Indian HADR effort – in the wake of the Indian Ocean tsunami of 2004 – that birthed the current era of US-India military cooperation. Operating with the Indian Navy to deliver relief to Indonesia and Sri Lanka, the US Navy reported to Washington that here was a regional partner worth having. The next year saw the US-India defence cooperation agreement.

HADR and a real combat beach landing require similar military resources. The Indian side will deploy its biggest amphibious assault ship, INS Jalashwa; a tank landing ship, INS Airavat; and INS Sandhayak, a survey ship that will function as a hospital ship.

The US Task Force will include the naval landing ship USS Germantown, which is equipped with landing craft and amphibious assault vehicles needed to land large numbers of marines onto a beach. Specially trained troops from the Third Marine Expeditionary Force – a specialist unit for combat beach landings – will be accompanied by a medical team.

The exercise will involve sailing from Vishakhapatnam to Kakinada, and then staging a shore landing and setting up a joint command centre and a joint relief and medical camp.

For the Indian Army, this will be a chance to learn from amphibious landing masters, whose tactics date back to the Pacific Campaign in World War II, where they captured one island after another from the Japanese – Midway, Wake Island, Iwo Jima and Guadalcanal.

For the exercise, India is fielding a battalion group, from 19 MADRAS, and BMP-II armoured vehicles from 7 GUARDS. The Indian Air Force (IAF) will deploy one C-130J Super Hercules aircraft, Mi-17 transport helicopters and a Rapid Action Medical Team.

While Exercise Tiger Triumph is an early step in learning, and is therefore being carried out with fewer resources, a full-scale, tri-service beach landing operation is the capability that India is seeking to build.

In such a combat operation, INS Jalashwa, or another Indian landing platform dock (LPD), would carry a battalion of soldiers (850 men), with armoured assault vehicles, to within 30-50 kilometres of the beach, from where smaller, flat-bottomed landing craft mechanised (LCM) would carry the invasion force to the beach.

To protect the invasion force during the beach landing, the Jalashwa’s six helicopters would heli-drop marine commandos behind the enemy troops that are defending the beach. In addition, naval frigates or destroyers would provide fire support, with their 100 millimetre main guns plastering the enemy’s coastal defences. Simultaneously, IAF fighters, operating from shore bases, might also support the beach landing.

Since 2000, the navy’s Maritime Warfare Centre in Visakhapatnam has been refining these tactics. An Indo-US planning exercise, called “Habunag” has coordinated expeditionary HADR activities with the US navy. Now the USMC will have its word.
Posted by Broadsword at 13:42

How is it going to help win often repeated two front war specially against China?

PM = Ulu banaoing Indians for votes just as he says India will be a 5 trillion economy..

Small correction : Midway was never captured by Japan so there is no question of beach landing by US Marine!