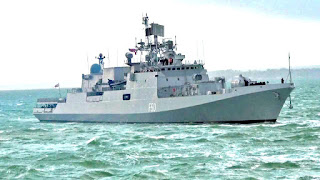 INS Tarkash, a Krivak-III frigate built for the Indian Navy

Defence Minister Rajnath Singh was correct in stating that the Indian Navy could deal Pakistan a heavier blow today than in 1971, when Indian missile boats attacked Karachi port. But Mr Singh has set his sights very low. The Karachi strikes, while morale boosting, were eventually peripheral to the outcome of that war. Today, given that Indian Navy’s budget of $8 billion is only slightly smaller than Pakistan’s entire defence allocation of $11 billion; far more would be expected from it. New Delhi’s strategic vision of the Indo-Pacific requires the Indian Navy to exercise control over not just the Arabian Sea and Bay of Bengal, but all of the northern Indian Ocean from the Strait of Hormuz in West Asia, to the Malacca Strait in the East. In achieving this, the key challenge would come not from Pakistan’s weak navy, but from a bigger and stronger China, which is already asserting its presence in these waters. The question for Indian planners is: How ready is our navy for that?

Serious capability shortfalls are evident from the navy’s demand for a larger share of the defence modernisation budget. In an unusually blunt statement last fortnight, the navy vice chief publicly lamented that, in the last seven years, its share of the overall defence budget has dropped from 18 per cent to under 14 per cent today. Meanwhile, its share of the capital budget has fallen from over 30 per cent to less than 24 per cent today. The Indian Navy’s long-term capability plan envisions a fleet of 200 warships and 450 aircraft by 2027, but it currently has just 131 warships and 230 aircraft. Worse, most shortfalls are in capital warships – the multi-role destroyers, frigates and corvettes that are the navy’s workhorses. Submarines are in short supply and the government’s inability to conclude a long-delayed contract for building 24 minesweepers has left the navy with not one of these crucial vessels.

Equally worryingly, many capital warships built in the last two decades are operating without sensors and weapons that are central to their capability. Most of the navy’s modern vessels are not fitted with modern towed array sonars, essential for detecting enemy submarines. These warships, each costing several hundred million dollars, risk being torpedoed because of the absence of sonars worth a few million dollars each. Similarly, the Scorpene submarines now entering service at half a billion dollars each are toothless because contracts have not been concluded for modern torpedoes. As a stopgap, the navy’s decades-old SUT torpedoes have been given a lifetime extension but numbers are falling to barely six torpedoes per submarine.

Part of the blame lies with the navy, which designs quality warships, but builds just three-to-four vessels in each design class. In comparison, the US Navy builds to a standardised design – it commissioned USS Arleigh Burke in 1988, and has since built 82 destroyers of that class. This allows for incremental design and process improvements and economy of scale for vendors and sub-vendors. In comparison, the Indian Navy’s 12 destroyers are spread over three different designs.

The challenges before the navy are clear. Rather than bluster, it is time for the government to set a clear roadmap, allocate the finances needed and facilitate the navy in creating the capability needed for supporting India’s strategic vision in the region.
Posted by Broadsword at 09:14

Col. Shukla, you need some corrections in your article...

USA had three different types of warships … now it still has two of these types in active service..-

It used to have Oliver Hazard Perry Class Frigates but the last one was decommissioned in 2015...
USA is trying to build bigger and modern FFG(X) Frigates...


Perhaps India must make some compromises like it did with South Africa / Denel, and make a compromise with Italy/Finnemeccanica for Blackshark torpedoes... Finnemeccanica is not involved in corruption so it is easy to wiggle out...

If that is not possible, then it must immediately get some F21 torpedoes from France for at least Scorpenes…


India must choose 3 different designs for Destroyers, Frigates, and heavy Destroyer/Frigate (something like a cruiser) and keep building them in India only...
Pay for advanced technology and integrate and then produce in India...

With pak economic situation in doldrums and debt with China rising ...very soon China will park a few nuclear subs in Karachi.

The US has just one type of destroyer -- the DDG 51 Arleigh Burke-class. The Ticonderoga class warships are cruisers. Cruisers are a heavier class of warship than destroyers.

No one stick to one type forever...
USA has two types of Destroyers Arleigh and Zumwalt...

They also have a host of Littoral Combat Ships (LCSs)…

India also needs various kinds of destroyers and FFGs … some light and some heavy... some carry one helicopter and others two helicopters...

Perhaps you research well again before pushing your idea...

What about DDG1000 Zumwalt class!!

Nope Arleigh Burke Class is not the only one in US Navy...

The Zumwalt-class destroyer will be capable of performing a range of deterrence, power projection, sea control, and command and control missions while allowing the Navy to evolve with new systems and missions. It does all of this while maintaining its stealth - making this visually imposing ship difficult to find whether close to the shore or far out to sea.

The ship cost about $4 billion, has a crew of about 175 and is 100 feet (30 meters) longer and 13 feet (4 meters) wider than the previous class of U.S. destroyers, according to officials.

Presently their engines and some other systems have snags and they are trying to hash them out...

Next year they will award a FFG contract that would be one of the meanest fighting ship...

Every Navy goes for incremental improvements until they find a design they can rely for a long time...

Need to research properly and present...

Also you blame all the ills of previous governments on the present government for some reasons...
This government has nothing to do with Blackshark torpedo's... UPA government and IAF chief Tyagi corruption scuttled Blackshark…