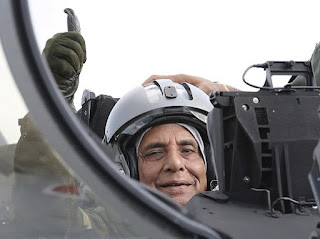 As the Indian Air Force (IAF) celebrated its 87th anniversary on Tuesday, a clear theme was the operations of February 26, when Indian fighter aircraft attacked the Balakot terrorist training camp in Pakistan and skirmished with counter-attacking Pakistan Air Force (PAF) fighters the next morning.

Drawing thunderous applause from spectators at Hindan Air Base outside Delhi was the “Avenger formation” in the fly-past, a three-aircraft formation led by Wing Commander Abhinandan Varthaman in his MiG-21 BISON fighter, flanked by two Mirage 2000 fighters flown by pilots who had bombed Balakot.

Varthaman was shot down and captured by the Pakistani military in that skirmish, but only after shooting down a PAF F-16 fighter, as claimed by the IAF.

On Friday, the IAF had released a promotional video, celebrating the bombing of Balakot and the subsequent aerial skirmish as major accomplishments.

Meanwhile in Merignac, France, aerospace firm Dassault delivered to Defence Minister Rajnath Singh the first of 36 Rafale fighters the IAF has bought for Euro 7.8 billion. Prime Minister Narendra Modi has claimed that the outcome of the aerial confrontation in February would have been “something very different” had the IAF had Rafales at that time.

Yet, despite Singh’s symbolic “acceptance” of the first Rafale fighter in Merignac, the IAF is still years away from fielding Rafales with the full capability New Delhi has paid for.

On Friday, the IAF boss, Air Chief Marshal Rakesh Bhadauria, revealed that the first IAF Rafales, a batch of four aircraft, would only reach India next May. That means an eight-month delay from the contracted delivery date of September 2019 – or three years after the contract was signed.

Further, these Rafales, and tens more that will follow them, will not have the enhanced capabilities – termed “India Specific Enhancements” (ISEs) – the IAF has demanded and paid Euro 1.7 billion for. The Comptroller and Auditor General (CAG) report of February 2019 reveals that, until December 2021, the IAF will receive less potent Rafales, built to the lower capability specifications of the French Air Force.

According to the CAG report, the IAF will receive its first Rafale with ISEs installed only in December 2021 – 63 months after the contract signature. Then, over the subsequent eight months, i.e. till August 2022, Dassault (and its French avionics partner, Thales) will install and retrofit ISE capabilities on all 36 Rafale fighters contracted by the IAF.

The IAF chief has downplayed the eight-month delay in delivering the first Rafales by arguing that IAF pilots would get more time to train in France.

On Friday he stated: “The aircraft will come at the end of May next year in Indian skies. The advantage is that our pilots will be substantially trained by then. That group of pilots will be near ‘operational’ to take on any task after landing here.”

Bhadauria also dismissed speculation that the delivery of 36 Rafales could be followed by an order for 36 more. He indicated that, to supply more Rafales, Dassault would have to win the IAF tender for 114 “multi-role fighter aircraft” (MRFA).

“Our plan is for building 114 MRFA in the Strategic Partner (SP) model and that is currently being followed,” said Bhadauria.

The tender will involve choosing original equipment manufacturers (OEMs) from seven firms that have expressed interest– Dassault, Lockheed Martin, Boeing, Sukhoi, MiG, Saab and Eurofighter. Simultaneously, Indian SPs will be chosen from private and public sector firms that meet the qualifications. Qualified SPs will then partner selected OEMs and submit proposals to the government.

Aerospace analysts believe Dassault is well-positioned to win the MRFA tender, since it has already amortised many of its costs in the tender for 36 Rafales.

Before flying to Merignac, the defence minister had a 35-minute meeting with French President Emmanuel Macron in Paris.

The Air Force Day parade and fly-past at Hindan also saw debut participation from the Apache AH-64E and Chinook CH-47F – both American helicopters that were inducted into the IAF over the preceding year.
Posted by Broadsword at 10:31

We saw officer like qualities in abundance when Abhinandan Varthaman was taken prisoner, he fulfilled the expectations of a professional combat fighter pilot, by his conduct in captivity.
So Why has this fine young man being made now to compromise his integrity, all for propaganda purposes?
The IAF claim of shooting down a F16 is false and does an injustice to this fine officer.

Do we really need the 114 foreign jets, when the Tejas MWF is being built ?

It's specifications match the Gripen NG's, and will also have an AESA radar.

You Pakistanis can keep claiming that, but the IAF has displayed enough evidence and more, of the F-16 shoot down. Grow up, accept your foibles.