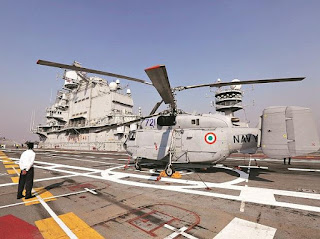 Seeking to galvanize the US-India defence partnership, the two countries on Thursday signed a “Joint Statement of Intent” (SoI) that formalised their intention to co-develop a range of cutting-edge warfighting technologies and systems for their militaries.

Lord is in Delhi for the 9thmeeting of the India-US Defence Technology and Trade Initiative (DTTI), which she co-chairs with India’s Secretary for Defence Protection, Subhash Chandra. The DTTI was set up in 2015 to fast-track defence ties.

During Thursday’s DTTI meeting, both nations agreed to co-develop three specific projects in the near-term, two in the mid-term and two long-term projects. Lord clarified that “near-term” meant about six months.

The first of three “near-term” projects is an “air-launched, small UAS”, which is a drone swarm that is launched from an aircraft to overwhelm enemy defences.

“There are some small, very innovative companies here in India that have technology that could be applied to air-dropped UAS and swarming. There is a high level of interest on both sides,” stated Lord. 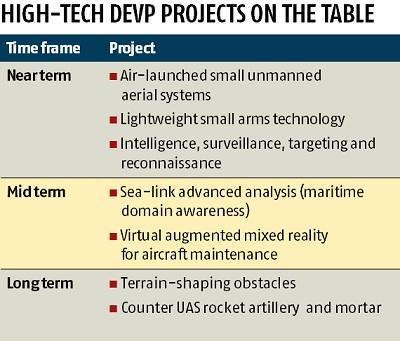 The second “near-term” project is the “lightweight small arms technology” project. This involves building rifles, carbines and machine guns from lightweight polymer cast material. Even the ammunition is cast from plastic, to reduce weight. US firm, Textron, is already working on this technology. It would partner an Indian firm to develop and build small arms for India.

The third “near-term” project is in the field of “intelligence, surveillance, targeting and reconnaissance (ISTAR),” which is command and control software that enables coherent battlefield command.

Of the mid-term project, the first, which relates to “maritime domain awareness”, is termed “Sea Link Advanced Analysis”. Its software analyses shipping passing through an area, such as the Indian Ocean, and differentiates innocent commercial shipping from hostile warships. This uses artificial intelligence (AI), for which skilled Indian software engineers would co-develop the algorithms.

The second mid-term project is called “Virtual Augmented Mixed Reality for Aircraft Maintenance (VAMRAM).” This is a teaching aid for technicians learning how to maintain a combat aircraft. It involves wearing a VAR headset to walk through the maintenance experience. Several Indian start ups already have the capability to build and customise VAR.

Amongst the long-term projects, the co-development of “terrain shaping obstacles” involves slowing enemy manoeuvre forces by increasing the lethality of traditional obstacles like mines and barbed wire.

“This is an area that the US is focusing on and it is interesting to Indians so we believe there are a lot of technologies that could be exchanged there,” said Lord.

Lord admitted that the DTTI has faced criticism in the past. This was due to lack of progress on four high-profile pilot projects that were identified for co-development during President Barack Obama’s visit to India in January 2015.

These included the co-development of Raven micro-UAS; mission-specific interiors for C-130J Super Hercules aircraft; a mobile electric-hybrid power source, and protective clothing for soldiers in a nuclear contaminated battlefield. None of these have seen the light of day.

Lord also revealed that a joint working group set up to collaborate on developing high-performance, aerospace jet engines has now been scrapped.

“We could not come to an understanding of what exportable (engine) technology would be useful to the Indians. And we did run into a challenge in terms of the US export control,” she admitted.
Posted by Broadsword at 08:00

With the US, no real technology will come, it's going to be a new way of paying more and getting the same thing that we could have got through the FMS route, cheaper

rather than these unnecessary optics, we should spend it on R&D and fund research at our colleges. Don't try to innovate, just follow China. they've done pretty well.