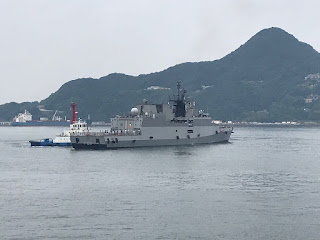 Besides being badly late, Project 28 is also over-budget – by an incredible 250 per cent. The four corvettes were sanctioned for Rs 2,700 crore, but INS Kamorta, Kadmatt, Kiltan and Kavaratti will end up costing about Rs 7,000 crore in all.

Even so, there is no complaint from the Ministry of Defence (MoD), or from the usually demanding navy. The admirals regard the delay as an acceptable price for making the Kamorta-class India’s most highly indigenised warships – about 90 per cent “Made in India”.

The ASW corvettes, which are designed and equipped to detect enemy submarines and destroy them with torpedoes, have also ended up far more silent – and, therefore, better equipped to listen for submarines – than originally envisioned.

Project 28 time-and-cost overruns mounted progressively. The first delay was caused by the MoD’s decision that INS Kamorta and its successors would be constructed from indigenous warship-grade steel – called DMR 249A, and manufactured by Bhilai Steel Plant. Developing and producing DMR 249A in sufficient quantities took two years longer than anticipated.

Then, after constructing the first two corvettes (INS Kamorta in 2014 and Kadmatt in 2016), the navy decided that the third and fourth corvettes would have superstructures (the part above the deck) built from composite materials.

The lower radar reflectivity of composites makes the corvettes harder to pick up with radar. Also, being far lighter then steel, composite superstructures have reduced the weight of INS Kiltan and Kavaratti from 3,150 tonnes to just 3,000 tonnes, thereby increasing their speed to 46 kilometres per hour (kmph) and their sea endurance to 6,400 km at a speed of 33 kmph.

However, that also imposed another year’s delay, as Swedish firm Kockums taught GRSE workers the intricacies of building with composites. Since composites cannot be welded, sheets must be held together with rivets that are finely calibrated according to the weight they support.

Over the course of Project 28, indigenization levels have reached 90 per cent, says GRSE chief, Rear Admiral VK Saxena (Retired). These include the difficult areas of sensors and weapons, where import content is usually high.

Bharat Heavy Electricals Ltd has built the 76 millimetre Otomelara gun, while Larsen & Toubro has built the heavyweight torpedo tubes and rocket launchers used to destroy enemy submarines. The Kavach chaff launchers that serve as decoys for incoming missiles are built by the Ordnance Factory Board in Ambarnath.

Bharat Electronics Ltd has built most of the sensors and combat management systems in the Kamorta-class corvettes. These include the Revathi radar that detects enemy aircraft out to 300 km, the Lynx fire control radar that guides missiles and the Combat Management System (CMS) that integrates all the weapons and sensors.

Kirloskar Oil Engines Ltd (KOEL) has built the four diesel engines that power these corvettes, while the on-board power generation system (consisting of 3 MegaWatt generators) is manufactured in India by Cummins and Kirloskar Electric.

Given the success in designing, manufacturing and evolving a successful ASW corvette, GRSE executives say the MoD should order more corvettes, which the navy badly needs.

Yet, despite the manufacturing eco-system already created, the navy is now evolving a design for the so-called “Next Generation Corvette”.

“We have taken up a case with the navy and are in talks with them. It makes sound economic sense to freeze the design and specifications of the successful Kamorta-class and build around that,” says Saxena.

The GRSE chief points to the US Navy’s so-called DDG-51 programme, under which it has built 82 destroyers of the successful Arleigh Burke-class. Currently, every one of the US Navy’s destroyers is of this class, which has allowed incremental design and process improvements and economy of scale for vendors and sub-vendors.
Posted by Broadsword at 10:45

India must order three more Corvettes immediately to keep the assembly lines going at all these industrial organizations...

India must still aggressively pursue modernization, R&D, and D&D to come up with even better Corvettes …
Perhaps these organizations should band together and build the composite minesweepers at home all by themselves instead of relying on unreliable South Korea…
South Korea refused to share the IP and transfer technology just before the final contract signing...

SK was taking India for a ride... all countries and companies promise IP and TOT and then they just say no before fingal contract signing... Just like Dassault...