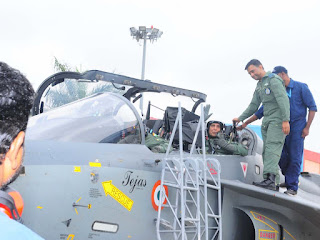 On Thursday, Rajnath Singh became the first Indian defence minister to take a flight on the Tejas Light Combat Aircraft in Bengaluru. In flying in the Indian fighter, he was signalling confidence in the indigenous fighter programme. His predecessor, Nirmala Sitharaman, chose to fly in a Russian-origin Sukhoi-30MKI last year.

Asked after landing why he chose the Tejas fighter, Singh responded: “Because it is indigenously developed.”

Interestingly, Singh is not the first defence minister to venture up on the Indian-designed fighter. That honour went to Singapore’s Defence Minister Ng Eng Hen over a year ago, when he took a ride on a Tejas in July 2018.

Describing the 30-minute flight as “exhilarating”, Singh said: “It was very smooth and comfortable. I was enjoying it. I want to congratulate HAL, DRDO and several agencies concerned. We have reached a level where we can export fighter planes across the world.”

At least two countries, including Malaysia, have expressed interest in the Tejas, but no firm orders are in hand yet.

Hosting the defence minister in Bengaluru was the Aeronautical Development Agency (ADA), which is responsible for designing, developing and taking forward the Tejas LCA. Singh was personally flown by Air Vice Marshal N Tiwari, who heads the National Flight Test Centre in Bengaluru.

The defence minister had let it be known that his sortie was aimed at raising spirits amongst the ADA designers and pilots who were developing the fighter. While 40 Tejas Mark 1 are already on order, the defence ministry is negotiating the procurement of another 83 Tejas Mark 1A fighters for some Rs 33,000 crore.

The Tejas Mark 1A has a superior radar, air-to-air refuelling, a jammer pod and easier maintenance, and is being developed by Hindustan Aeronautics Ltd (HAL) in Bengaluru. The defence ministry’s procurement chief, Apurva Chandra, revealed on Tuesday that the price for 83 fighters has been successfully negotiated and only the maintenance and support costs remain to be finalised before the IAF signs a production contract with HAL.

Meanwhile ADA is developing the Tejas Mark 2, with a more powerful General Electric F-414 engine; as well as the Advanced Medium Combat Aircraft (AMCA), which is a twin-engine, fifth-generation fighter with stealth features. Both these fighters are expected to be ready only after 2025.

ADA is also developing the naval Tejas Mark 1, which carried out its first “arrested” landing on a shore-based facility in Goa last week. The navy sees the Tejas as a stepping stone towards the AMCA, which would be the first indigenous fighter it fields on an operational aircraft carrier.
Posted by Broadsword at 18:36

Stop your unrealistic dreams about exporting until India can manage to have a home grown fighter engine that really works on Tejas IA and II, and AMCA...
USA will not allow it as it will cut into their F-16 exports...

India can build Tejas IA immediately to ramp up the fighter numbers...

India must design and develop concurrently Tejas II (MWF) and AMCA using GE F-414INS^ engine... one for MWF and two engines for AMCA...
Prove all the technologies in these two fighters and hope that someday a homegrown fighter engine will replace the GE F-414INS^...

Since India will be using large number of GE F-414INS6, the USA and GE may transfer some level of TOT.... something is better than nothing...

In the end, India will have fighters to defend the homeland and technology and infrastructure to build the fighters...

I am sure indigenous fighter engine effort will borne fruitful in the future...

We are proud of the Tejas

But we need the RAFALES to take out the PAKISTANI CHINESE STEALTH FIGHTERS IN 2030.

Col. Shukla, this is regarding the last para of your article. Does it mean that the Navy is looking to induct a navalized AMCA only, and has no interest in the Naval Tejas ?

Yes, that's right. It wants a twin-engine fighter for operating at sea off a carrier.

and why is this great news!! we have seen photo ops of all RM's visiting Siachen, fly fighters and have a nice ride on an IN vessel but means nothing for fulfilling what the service needs. it's been 2 years since RFP was release for tejas mk1a and no visibility on contract. same for Su-30 lines which are about to close and also jaguar upgrades. nobody asks these questions to RM...this circus will continue...
what are his views on CDS?? why is the NSA supervising selection?

Col Shukla well, if the navy could operate the Sea Harrier -- and sing it's praises to the heavens -- till just a few years ago, what's the problem with inducting the next generation N-Tejas ?