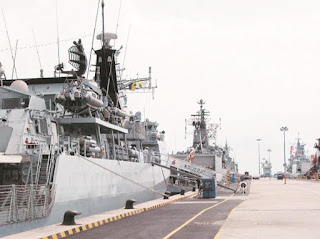 On Monday, the Royal Malaysian Navy (RMN) cleared a combat management system (CMS) that a small, but cutting-edge, Indian electronics company has developed for two of its frontline warships – the British-origin RMN frigates, KD Leiku and KD Jebat.

A warship’s CMS is the brain of its combat capability. The CMS continuously interacts with all the ship’s sensors and weapons – including radar, sonar, missiles, rockets and torpedoes – and assesses the threats that they detect. Then, the CMS suggests weapons to neutralise the threat; and it fires and controls those weapons.

In addition, the sophisticated CMS software collaborates with friendly warships’ command systems over a real time datalink. This develops a “common operating picture” for fleet operations.

Validating the truism that high-technology is mostly developed by micro, small and medium enterprises (SMEs), C2C DB Systems is the only Indian firm that has developed a complete CMS, including tactical datalink capability and warfighting modules (which navies guard zealously).

C2C DB Systems is based in Bengaluru and has a total strength of 50, including senior management, hardware and software engineers and mechanical design engineers. Its annual turnover is around Rs 25 crore.

Yet, this small firm partnered with a Malaysian firm, Marine Crest Technologies, to wrest the tightly contested RMN contract from global competitors such as Thales of France, Saab of Sweden and UK-headquartered BAE Systems.

RMN placed the order for the two CMSs and tactical datalink systems in April 2018, stipulating a delivery period of just nine months for the first system. Typically, developing a similar system in India takes about two years.

The complete system was installed on board the first RMN frigate in March, after being fully integrated with the warship’s weapons and sensors. “Harbour acceptance trials” of the tactical datalink were unconditionally cleared on Monday, while CMS trials are under way. Next will come “sea acceptance trials” at the end of this month.

C2C DB Systems is tightly integrated into India’s warship production eco-system. It has worked with WESEE to develop the complete front-end software for the CMS of India’s first indigenous aircraft carrier, INS Vikrant. It has also done classified work for the nuclear missile submarine, INS Arihant.
Posted by Broadsword at 07:22

Very proud of you and the strength of your conviction, and courage to bash on, knowing there are so many known and unknown unknowns!!

It is a very good sign. India has big potential in shipping, bigger than aviation.

Hopefully at least 3 steps below are take :
1. We now need MoD to give more warships contracts to pvt sector .
A co like L&T should be able to conceptualise, design & manufacture ships.

2. Same with civilian shipping, GoI should Ensure all vessels under sagarmala yogana are made in India.

3. Setup more dry docks along the coast of India. This will bring business and jobs if repairing & retrofitting ships.

The owner of this company is a veteran of the Indian navy's engineering arm, WESEE. What is somewhat strange is that this company was incorporated as recently as in Feb 2018, and in just 18 months has bagged a foreign contract.

Most of his knowledge and experience came via his stints spanning decades in the Navy. That means the Navy's engineers have the talent and technologies to develop breakthrough products.

No wonder out of the 3 services, the Navy is the most indigenous friendly of all. However, it must do more as it's "alumni" are blazing trails abroad, whereas its dilly-dallying on the induction of the N-Tejas.

Awesome!We need more such companies and our MoD has to step out of it's preconceived mindset that private Indian companies can't build entire warships!

How come reduction in bhadwa giri and increasing focus on defence journalism ???