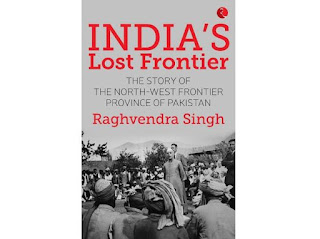 Raghvendra Singh’s lengthy book on the past, present and future of what the British called the North-West Frontier Province (NWFP) and Pakistan renamed as Khyber-Pakhtoonkhwa conforms to the current trend of blaming Jawaharlal Nehru for many of India’s woes. Singh is a retired civil servant from the Indian Administrative Service whose bent for history was presumably stoked by an appointment as head of the National Archives of India. He has recently been appointed chief of the Development of Museums and Cultural Spaces.

Singh makes a simple argument in his book: In 1946, the overwhelmingly Muslim NWFP elected a Congress government, which was firmly in the saddle as British and Indian leaders discussed the modalities of partition. Were the NWFP leaders to opt for joining India – as seemed likely at that time – the two-nation theory that Mohammad Ali Jinnah and the Muslim League propagated would have been severely discredited. Further, Pakistan’s strategic viability would have been compromised, especially if Kashmir acceded to India, creating geographical contiguity with the NWFP. Given the popularity of the NWFP chief minister, Khan Abdul Jabbar Khan (universally known as Dr Khan Saheb) and his iconic brother, Khan Abdul Ghaffar Khan, who was also known as Badshah Khan or the Frontier Gandhi, both of them politically and ideologically linked with Mahatma Gandhi and the Congress, the NWFP seemed likely to opt for India. However, British political leaders, who were eyeing the exits from the subcontinent, were convinced of the strategic necessity of partitioning India and having Pakistan as an assured ally, rather than relying on the favour of an undivided subcontinent. They believed a friendly Pakistan would enable London to retain its influence in the oil-rich Persian Gulf, as well as provide air routes through the region. And so, with London hell-bent on partitioning India, it directed a procession of British villains – notably NWFP governor Sir Olaf Caroe and Viceroy Lord Louis Mountbatten – to conspire with Nehru to ensure that Pakistan eventually got NWFP. This thesis bears striking similarities with arguments made by others about how Nehru lost much of Jammu & Kashmir (J&K) through mismanagement at best, if not outright skulduggery.

This argument fails to convince, deploying as it does the benefit of hindsight, while remaining oblivious to the enormous complexities facing Indian decision-making at that time. Indian leaders of that period had no experience of statecraft and had never been allowed by the British to handle security policy. Furthermore, all contemporary accounts of that time reveal the preoccupation with integrating the key princely states such as Hyderabad, rather than focusing on J&K and the NWFP. There was a genuine and valid fear of Balkanisation. Nor do the “incompetence” arguments take into account the capacity deficit that hamstrung the Indian leadership, especially in the fields of political intelligence and military power. Given these limited circumstances, the author appears to have underestimated the difficulties of forming two countries from the 17 provinces and 565 princely states the British left behind.

Even so, the author has mined multiple sources to bring out a detailed historiography of a complex and little-studied region. He has followed an interesting methodology – adopting a chronological approach up to the World Wars, and then taking up the narrative through the inter-war years through chapter-length studies of the key personalities in the great NWFP drama. The protagonists include British officials and administrators Caroe and Sir George Cunningham; British Viceroys General Archibald Wavell and Mountbatten; the trio of Badshah Khan, Dr Khan Sahib and Abdul Qayoom Khan and, of course, the central decision-makers, Nehru and Jinnah. In dealing with these personalities, the author weaves back and forth in time, sometimes confusingly, throwing up themes and leaving it to the reader to interpret the narrative as it comes through.

Some of these portraits make for fascinating reading. About the stoic, Spartan Wavell he quotes: “On he went up the great, bare staircase of his duty, uncheered and undepressed.” He never got along with Churchill, whose “main concern whenever Wavell was home on consultations was how to send him back to New Delhi.” About the charismatic Mountbatten, whom the author clearly dislikes: “He was considered a remote and irresponsible master who sat in his luxurious office at Kandy (Sri Lanka) as a Zeus on Olympus, coming down once in a while to make sport with the lives of men fighting in a jungle, cool, charming and godlike in his taste for other people’s confusions.” The author writes that when Mountbatten commanded the fifth destroyer flotilla, the professional opinion about him was: “There is nobody better to be with in a tight spot than Dickie Mountbatten and nobody likely to get you into one sooner.”

The book finishes with a chapter, best described as “potted strategy”, that recounts the geo-strategic importance of the Hindu Kush mountains that straddle the tribal areas of the NWFP. The author points out that all migration along the “Hindu Kush Highway” from Afghanistan has taken place in an easterly direction towards India. The only example of the westerly move was the spread of Buddhism towards China. He warns that this holds a cautionary tale for India, especially with the Chinese expanding into the region and building “belt and road initiative” projects in Pakistan.

The strong points of this book are its historiographical research into a region of relevance, even if the reader does not necessarily agree with the conclusions the author draws. It is well produced, footnoted and indexed and should be widely read by students of the endless Af-Pak confrontation.
Posted by Broadsword at 13:34

there is no doubt that Nehru bungled and grossly mismanaged the handling during partition and afterwards. but then he was new in the shoes and inexperienced. nevertheless he would have been PM for another decade or so had 1962 disaster not taken place. he was after all PM for 17 years w/o any opposition. flogging a dead horse will not help but it shows how we as a country bungled mishandled the situation and were not united at the time when we most needed. we failed miserably and allowed our neighbour to cache the situation. we bungled again in 1965 and again in 1971 and again in 1999 by not extracting anything from neighbour even though we had the upper hand. these strategic blunders continues to haunt this great nation. no other country would have lost as much strategic opportunities (imagine having presence in NWFP or Balochistan or current day gilgit bordering afghanistan) as we did!! but then you were always aligned to the congress versions and views.

NWFP was denied to India because, the British said, it was not contiguous to India. But it was contiguous, via Kashmir. Kalat (most of Balochistan) was an independent country NOT part of India. The ruler begged Nehru to accept his accession. Nehru said no. Kalat was not continuous, but neither wast East Pakistan to West Pakistan. Nepal asked to accede to India. Nehru said no.

Its easy to blame Nehru, and I do blame him, but there are extenuating circumstances. Partition was carried out in a tearing hurry by Dickie. As early as 1946 India was already awash in blood because of Jinnah's call for violence in Calcutta, which kept expanding. I've heard it said more people were killed pre-August 15 than after that. It was a terrible time for India, no time for anyone to think straight.