After Trump’s GSP snub, US talks up ties on defence with India 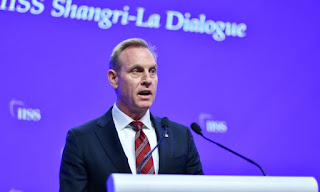 On Saturday morning, New Delhi was served a reminder about how close strategic partnership with Washington went hand in hand with intense competition on trade and commerce.

“I have determined that India has not assured the United States that India will provide equitable and reasonable access to its markets. Accordingly, it is appropriate to terminate India's designation as a beneficiary developing country effective June 5, 2019”, announced a statement signed by Trump.

Just hours later, Trump’s acting defense secretary, Pat Shanahan, speaking at the Shangri-La Dialogue in Singapore, declared that America was “increasing the scope, complexity and frequency of its military engagements with India” in maintaining a free and open Indo-Pacific.”

Shanahan avoided naming China as a common adversary, but his hard line speech left little to the imagination. “Some in our region are choosing to act contrary to the principles and norms that have benefited us all," he said, citing a “toolkit of coercion” being used to militarise disputed territories, and interference in countries’ domestic politics through hybrid influence operations.

Citing “shared interests, democratic values, and strong people-to-people ties”, the IPSR-2019 said “US and India continue to use their deepening relationship to build new partnerships within and beyond the Indo-Pacific.”

The report pointed out that the US had designated India a “major defence partner” in June 2016, “seek[ing] to elevate the US defense partnership with India to a level commensurate with that of the US’ closest allies and partners.”

It also cited the institution in September 2018 of the US-India 2+2 dialogue, where both countries foreign and defence ministers together discuss strategic cooperation.

“The signing of the Communications, Compatibility and Security Agreement (COMCASA) in 2018 represents a significant development in our military-to-military relationship, facilitating greater interoperability and real-time secure information-sharing. DoD and the Indian Ministry of Defence are increasing the scope, complexity, and frequency of our military exercises. Later this year, the United States and India will conduct our first tri-service exercise”, stated IPSR-2019.

Rebutting criticism within the region that America was not putting enough military force needed to counter an expanding China, Shanahan revealed that the US Indo-Pacific Command (USINDOPACOM), the geographic combatant command responsible for the region, has 200 combat ships and four times the military assets of any other American combatant command.

Citing approximately $16 billion that India has spent on US weaponry since 2008, the report cited the Defence Technology and Trade Initiative (DTTI), through which “we are increasing cooperation in defense technology, building industry-to- industry ties, and identifying opportunities for the co-development and co-production of defense systems for the sustainment and modernization of military forces.”

The prestigious Shangri-La Dialogue, traditionally attended by defence ministers of major powers as a forum to criticize China, is being attended for only the second time by China’s defence minister, General Wei Fenghe, who will speak in a solo plenary session on Sunday, at par in protocol with Shanahan, who spoke on Saturday.

In last year’s Shangri-La Dialogue, Prime Minister Narendra Modi had delivered the keynote address. Reflecting on the Indo-Pacific, he had observed that “…rules and norms should be based on the consent of all, not on the power of the few.”

This year, due to the election and formation of a new government, India has no high-level representation at the Shangri-La Dialogue.

They want us to be their front line state against china...first created afpak in 1980.

Our procurement system ensures GoI always does only emergency purchase , so selling F21 will not work.
We also need to tell them, buying F21 will compromise the aircraft radar signature to S400 .

As we grow economically it is natural that preferential treatment is removed ! We seem to have a reservation mentality.
We will anyway buy what we want. Expect naval helicopters , more P8I, drones from US. Infantary, artillery weapons too as per US standard. Not more.

@"Vikram_prasad" => I absolutely agree, they're into nonetheless armbinding you into dilapidating big on overexpensive US weapons, spoil your good relations with Russia and be in frontline against China, which, moreover, in case of clash, would make sure that China won't become a super power, but also make Indian growth void, so you won't risk to takes US 1st place too...
Moreover, a Rafale does the job of 3x F-16V(21) and in terms of air superiority is more on par with F-22, and the F-16V sold to Iraq ended more expensive than what India pays per Rafale.
I personally wouldn't have went for S-400,
I'd have opted for SAMP/T : half the price and 48 ready to launch missiles per battery. OK it ranges only 120km BUT the command post can directly connected to the monstrous Thales GS-1000 radar which ranges 1000km, offer targetting data and sees J-20/31 and is EZ to network through Link-16, then, simply completed with IAI Arrow-3, and no need for its huge Elta radar, now maybe the new ASAT you recently tested can make it too. For a lower layer, since S-400 also needs to be protected, Iron Dome is more pleasing than Pantsir and in case of CIWS gun, Rheinmetall/Oerlikon MANTIS/SkyGuard/SkyRanger is the best by far and now adds laser.

To avoid attrition due to MiG-21/27 retirement, since MBZ has hesitations at buying Rafale, maybe buying UAE's Mirage-2000-9 as 2nd hand would worth it, he must have about 60-70, it could help him deciding to go Rafale.

+++ "Our procurement system ensures GoI always does only emergency purchase , so selling F21 will not work.
We also need to tell them, buying F21 will compromise the aircraft radar signature to S400 ."+++
>>> LOL! And it's more expensive and 3x less efficient than Rafale, moreover, you've already paid to get a Dassault, a Safran and a Thales factory

+++ "As we grow economically it is natural that preferential treatment is removed!"+++
>>> As can be favouring US weapons which are ALWAYS overexpensive while no more efficient (most often less) than EU more affordable ones ;-)
To be frank, there is not a single case where India couldn't had bought something better for cheaper, except maybe for P-8