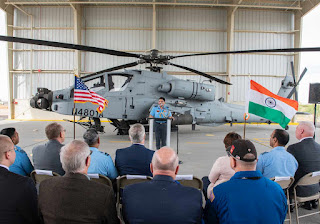 IAF to gets 22 Apaches for SEAD, another 39 are planned for the army's strike corps

The Boeing Company handed over to the Indian Air Force (IAF) on Friday the first of 22 Apache attack helicopters that India contracted to buy in September 2015 for about $3 billion at current prices.

An IAF officer, Air Marshal AS Butola, travelled to Boeing’s helicopter production facility at Mesa, Arizona, to attend the handing over ceremony, alongside US government representatives.

The IAF is buying the latest version of the Apache, designated the AH-64E (I) Apache Guardian. The first batch of 4-6 helicopters will be shipped to India in July, says the defence ministry.

The Apache is widely acknowledged to be the world’s most lethal combat helicopter, having flown about a million mission hours in conflicts from the First Gulf War in 1991 to the on-going fighting in Afghanistan.

It can operate by day or night with equal effectiveness, flying just metres above the ground and sheltering behind trees and sand dunes. Its advanced Longbow radar picks up enemy armoured vehicles and then destroys them with anti-tank missiles, air-to-surface rockets or a chain gun that sends 625 rounds per minute ripping into the targets. Designed to operate as the airborne component of a highly mobile, armour-heavy strike corps, the Apache has been dubbed the “flying tank”.

“The ability of these helicopters, to transmit and receive the battlefield picture, to and from the weapon systems through data networking, makes it a lethal acquisition,” said the defence ministry on Saturday.

Ground combat experts say the Apache should have been a straightforward buy of a premier tank-killing platform for the army’s three strike corps, instead of joining the IAF fleet. Former defence minister, AK Antony, after deciding that the new “Army Aviation Corps” would fly the army’s tactical support helicopters, succumbed to IAF pressure and allocated them the Apache.

Consequently, the 22 Apaches, distributed between two air force squadrons, will have the wartime role of “suppression of enemy air defences (SEAD)”. This refers to the US doctrine of destroying enemy air defence radars and missile batteries near the border, allowing fighter aircraft to cross into enemy airspace undetected.

Army aviation specialists reject this notion, arguing that the relatively slow-flying Apaches would be quickly picked up by Chinese or Pakistani surveillance radars and then shot down by their dense defensive network of anti-air missiles, guns and fighter aircraft. They point out that the US Army could use Apaches for SEAD only in highly asymmetrical conflicts like Iraq, where the US enjoyed overwhelming air superiority.

Acknowledging the army’s need for the Apache, the defence ministry has kicked off a separate procurement of six Apache Guardians for the army’s strike corps. Last June, the US Congress was notified about the proposed sale to India of six AH-64E Apache helicopters for an estimated $930 million.

These are for the first of three Apache units planned for the army’s three strike corps. Each squadron would have ten helicopters, and a thirty per cent reserve in depots to replenish losses caused by accidents or casualties.

Separately, the IAF and army are acquiring the Light Combat Helicopter (LCH), designed and developed by Hindustan Aeronautics Ltd, which is now close to being operationally certified. The lighter LCH is optimised for providing supporting fire to infantry soldiers in high altitude combat. The heavier, bigger Apache is more suited to mechanised warfare in plains terrain.

There is no “Make in India” component, or transfer of technology, in the Apache deal. The helicopter is to be built entirely in the US, then defence minister Manohar Parrikar informed the Lok Sabha on November 28, 2014.

However, the US Army is providing training at Fort Rucker, Alabama to the IAF pilots and maintenance personnel who will operate the Apache fleet.
Posted by Broadsword at 19:18

IAF has no business to get Apaches before Indian Army...
IAF can have one or two for each base installations if required...

If you saw the movies of 12 Horsemen and Lone Survivor and Zero Dark Thirty, Black Hawk Down, etc the Blackhawks are embedded with Army, Ranger and Special Forces units under the command of local commander...
Apaches must be under the command of Army Strike Formations and frontline Army bases...

It is weird for IAF to vie for the Apaches... It only creates bureaucratic layer and breakdown in quick responses...

It is why India badly needs Chief of Defense Staff (CDS) immediately...

This is fine, when is LCH going to be inducted ?
It was to get IOC in 2010.
Will LCH (with more than 10 year delay ) be able to match Apache in electronics (self protection, radar etc) and weapons ?
( other than high altitude capability, that is do with extra large engine bolted on to it)

This is a serpent that raises itself over the horizon into the battlefield, chances are you will not see it, the range of its missiles are longer than your main gun and your turret top armour is thin.
What do you do Broadsword?
Hope Air Defence vehicles are moving with you? but they will get the priority in the coming knock out from this flying beast and you will be next.
All you can do is, switch on your jammers, use your machine gun - and if enough reaction time and elevation, fire a refleks or two, make smoke.
And then later after the hit with your fuel tank ignited, they will scrape bits of flesh off the pulverised steel and gather charred body parts into plastic bags.
Put graphically, only to make it clear to the IAF the fight here happens without ejection seats.
If India does not want many of its young men to die in a future war, it’s essential the IAF gets air superiority- and be completely integrated with our strike formations, right down to the regiment level.
While the army does its job, you need to be prepared to cover cover it in the sky.
This is not the case at present.

Dear, Lashkar-e Shukla - (as one of the Bhakts addressed you)
You seem to have got everyones hackles up yet again.
They have put their entire IT brigade yapping at your heels,
It’s curious they take particular umbrage at your tweets
A unpatriotic Colonel is very confusing and a Khan Market Bandit to boot.
Not to mention putting the knife in by mentioning “at a Lutyens party’
Your kind of anti national has no business to write on defence matters
All these things are the monopoly of the BJP
Defence of India is part of the Sang Parivar and the army, navy and Air Force, also patriotism. Especially patriotism.
Therefore you are an usurper and only have to press a button for the chowkidars to fly into a rage
You must be doing something right to generate all this fuss

Buying 30 Apache's for the army and 22 Apache's for the air force is a massive waste of money. SEAD missions by the USAF are carried out by stealth aircraft like the B2, F22 and the F35. The US Navy uses electronic attack aircraft like the EA-18G and the F35 for SEAD missions. Additionally the USAF does not operate rotary wing except for SAR missions. The IAF should follow their example. The troop transport missions, CAS missions with helicopters should be removed from the hands of the IAF. For SAR missions Dhruv, Rudra and LCH should be more than enough. All other types of rotary wing aircraft should be transferred over to the AAC. All the money freed from operating rotary wing aircraft can be used to fund research for stealth aircraft, long range SOW, advanced electronic warfare equipment, drones which actually should be used for SEAD/DEAD missions.

The Pakistani AVN with the Bell AH-1F Cobra and the proposed future purchase of Chinese CAIC Z-10 are the equivalent of the Apache and is designed to tackle Indian armoured vehicles, the Apache built its reputation in Afghanistan where it fought the Taliban and in desert storm where it operated against Saddam Armour, but its not necessarily the best attack helicopter.
The CAIC Z-10 is stationed in Doklam with several helipads recently built and at Yadong and presents a threat to the Gangtok and Kalimpong division’s vehicular traffic, the Helicopter has a range of 800km and in addition is being deployed in other places on the Tibet Border.
Pakistan Army will also use the AgustaWestland A129 airframe with Turkish Avionics and Pakistani manufactured parts along with the Chinese Z-10 and their existing Bell Cobras against Indian Armour in the plains and also in Gilgit Baltistan.
The attack helicopter is a good investment for Pakistan in their future asymmetric war with India because they destroy twenty times their own production costs before being shot down.
While Pakistan and China have developed a doctrine on the use of these helicopters the Indian Army/IAF are still fighting for turf with plans and doctrine for attack helicopters at best Ad Hoc.

No radar dome over the rotors on this export version to India?

If paired with drones,can maybe make a case for IAF using it as SEAD/DEAD,but still a colossal waste,no suicidal,giving it to them,instead of the army. The army too needs a heavily sanitized space to operate it,somehow seems like target practice though.Hope I'm wrong.

>>>>>>>>>>>>>>> BOONDOGGLE! <<<<<<<<<<<<<<<
You can simply get 8 Air Tractor AT802U for the price of an Apache.
They may loiter for 8-10 hours just out of range of ManPADS or AA-Guns.
Consider using pods with no less than 10km range aerial rockets e.g. the Hydra-70 and the 127mm devastating Zuni, added with guidance kits, maybe consider a custompod for 7 Zuni rather than 4.
With the payload being 3690kg, by carrying 7 of such pods, you have about twice the firepower of an AH-64.
Other advantage : a single turboprop engine would need pretty low qualified pilots when a modern chopper is even more complex than an airliner. No less than 4 years studying. Moreover, you can bail-out/eject from a fixed wing. Usually, with a chopper, in case of problem, you simply die.

To be frank, the AT802U wouldn't be my 1st choice since mine would still be to be created, I've already described it in details, it'd look like a stretched OV-10 bronco mostly made of Kevlar with 2x 1940-2650hp, a small jet engine on the back 2 gun turrets each with the Rafale's GIAT 30M791 (2500RPM) w.2000 rounds and likely 12-16 of such rocket pods as main weapons and a shaft to use the 2 propellers on a single engine, the goal being able to loiter for loooong.
It'd just be even more devastating than a A-10 while the STOL capabilities from the Bronco would allow to operate from 199m LHD/LHAs as much as horribly rugged terrains.