Peering into the volcano: Chris Fair's book on Lashkar-e-Tayyaba 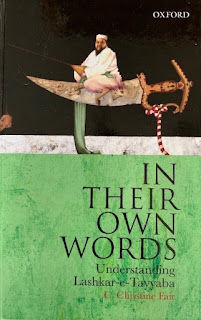 Five years after Christine Fair wrote Fighting to the End: The Pakistan Army’s Way of War, which attempted to decode the Pakistan Army’s strategic culture through a detailed study of its in-house publications, Fair has scoured the in-house literature of the Lashkar-e-Tayyaba(LeT) to arrive at how its members think and act in remaining the Pakistani “establishment’s” instrument of choice for cross border jihad. Her book is a deeply worrying look into the heart and sinews of a potent terrorist outfit that possesses the attributes needed to survive and flourish: unflinching state support, an institutionalised narrative of religion-based victimisation, strong support from a highly conservative populace, a steady flow of funds and a clear enemy.

In Fighting to the End, Fair relied on the Pakistan Army Journal, periodicals from Pakistan’s military Staff College and National Defence University and the Pakistan Army Green Book, an annual compilation of articles by Pakistani military officers. For this book, the author has mined a trove of materials including books, pamphlets, calendars and periodicals put out by the LeT’s exclusive publisher, Dar-ul-Andlus,nearly one thousand shaheed(martyr) biographies of LeT fighters who were killed while waging jihadin Kashmir, and the author’s personal materials collected during her numerous trips to Pakistan between 1995-2013. Fair writes that the Pakistan military’s Inter-Services Intelligence (ISI) blacklisted her in 2013, which prevented her from ever returning to Pakistan.

While this book provides a revealing and comprehensive guide to the broader jihadi landscape in Pakistan, its intense focus on the LeT is especially interesting. In an analytical arena where scholars’ perceptions and conclusions have been too often based on anecdotal evidence, Fair’s reliance on LeT publications comprises a more rigorous methodology. Her empirical analysis, drawn from hundreds of data cases, often upturns established tenets on jihadi groups, their sources of recruitment and their organisational principles.

The author convincingly underlines the unique, symbiotic relationship between Pakistan’s military and the LeT. Since Pakistan’s many Deobandi groups, such as the Jaish-e-Mohammed, Harkat-ul-Ansar and Harkat-ul-Mujahideen, draw resources from the wealthy Deobandi mosque networks and political influence from the Deobandi Jamiat-e-Ulema-e-Islam(JUI) political party, they are more independent from the ISI (which manages jihadi groups on behalf of the army). In contrast, the LeT has a far smaller resource base, since it draws on the Ahl-e-Hadeesinterpretation of Islam that is followed by just four per cent of Pakistan’s populace. Further, the Ahl-e-Hadees adherents are far from united, with serious disagreements over issues like jihad. That leaves the LeT with access to only a limited pool of domestic resources, leaving it dependent on the ISI that controls it tightly. Deobandi groups, especially those in the Tehrik-e-Taliban Pakistan (TTP) can engage in takfir– holding their rulers responsible for deviating from Islamic principles. However the ISI makes sure the LeT’s jihad never focuses inwards. The LeT can kill Hindus, Christians and Jews outside Pakistan, as during the 26/11 Mumbai terror attacks, but doing so within Pakistan would create disturbances and instability. Therefore, apostates in Pakistan are to be won over with tarbiyat(education) and dawa(proselytization).

The most convincing parts of the book relate to the data mined from the shaheedbiographies. It reveals that 98.9 per cent of LeT militants fight in Kashmir, with just a handful engaged in Afghanistan, Tajikistan and Bosnia-Chechnya. The LeT fighters die, on average, when they are 21 years old, but by then have already served the group for four years.

Postulating that the LeT provides the Pakistan Army with low-cost manpower to fight India deniably, Fair compares the terms of service of an LeT militant with those of a Pakistani soldier. Most LeT fighters complete the Daura-e-Khaas course, by which time they would have trained for 16 weeks. A Pakistani soldier trains for 36 weeks. Then he serves for 15 years, drawing salary and later pension. A LeT militant’s goal is not to retire with benefits but to die in combat. Thereafter, his family receives far less compensation than what the government pays the family of deceased soldiers.

Despite Fair’s rigorous research, the book allows in occasional errors of fact and interpretation. One example is her explanation for why the LeT activated militancy in Poonch and Rajouri in the mid-1990s. She ascribes this to LeT recruits sharing ethnic linkages with locals in those areas, which would allow them to operate there easily. In fact, the local populace consists mainly of Poonchis, Paharis, Gujjars, Bakarwals and Dogra Rajputs (both Hindu and Muslim). These groups contribute only marginally to LeT recruitment, which is drawn mainly from Punjab. The author also cites the intention to target a larger Hindu populace in Poonch-Rajauri, perhaps even replicate the ethnic cleansing of Kashmiri Pandits from the Srinagar valley in the early 1990s. In fact, there are almost no Kashmiri Pandits in Poonch and Rajauri, which are part of the Jammu region, not Kashmir. Finally, the record shows there was never any significant Hindu migration from those areas. The reality is that the ISI activated insurgency in Jammu after the mid-1990s because its fighters in Kashmir were under severe military pressure.

Notwithstanding minor errors, the author melds her vast experience in South Asia, her skills in Urdu and a penchant for empirical research into a very readable account of the LeT. This book must find a place on every South Asia specialist’s bookshelf. A final benefit for most readers would be an introduction to several new words: in one single paragraph of this book, I encountered “gasconading” (boasting extravagantly) and “prated” (engaged in empty talk). If you haven’t guessed it already, Fair was talking about Zulfiqar Ali Bhutto.

Ms Fair is able to produce and publish large body of material. Unfortunately her mistakes are not just that she got the population living on the sides of LoC wrong, who are extensively documented. Now she has written a book on a group from pamphlets. Quality and accuracy is not that important, when one needs to get a book out, I guess? This is what FOX news analysts do. The output is more like propaganda than a qualitative analysis. For how long was she parroting that Mullah Omar was in Quetta/Karachi, when actually he was living 500 yards from a US military base.

When it comes to collecting for Jihad, When giving do you think people asks are you Ahle-Hadith, Deoband or Sufi, etc...its laughable!!! She is quite clueless in fact.

She should not be encouraged and promoted in India as she can be very dangerous. She gathered good information that's alright, but she has a extremely poor judgement. Her racist arrogance, over confidence and misplaced sense of intellectual superiority makes her unworthy of our trust.

This is a New York Times article published a day after the mumbai attacks.

It was 2008. Pakistan was not fully exposed as a terrorist state.

I cannot think of a single "analyst" blaming fractures in American society for 9/11, on 9/12.

Excellent work by a scholar, this should've been done by Indian journalists. The effort that has been put in by her needs to be commended.