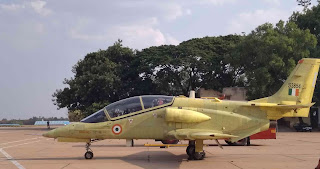 With its confidence buoyed by success in developing a basic trainer aircraft, Hindustan Aeronautics Ltd (HAL) on Wednesday flew its Intermediate Jet Trainer (IJT) after an extensive redesign that has taken almost three years.

“The flight was flawless and its success is an important step in the IJT programme”, announced HAL on Thursday.

The success of the IJT – also called the Hindustan Jet Trainer – 36, or the Sitara – is crucial for both HAL and the Indian Air Force (IAF). For a cash-strapped HAL, building 73 IJTs the IAF needs represents business worth Rs 5,000 crore.

For the IAF, the IJT would seemlessly replace a fleet of obsolescent Kiran Mark I and II trainers that are already on borrowed time. Without that, the IAF will have no aircraft for the intermediate stage of flying training. Late last year, the IAF decided that its rookie pilots, after completing “Stage-1” flying training on the Pilatus PC-7 Mark II basic trainer, would graduate directly to “Stage-3” training on the HAL-built Hawk advanced jet trainer (AJT).

The IAF realises that “two-stage” training places unrealistic demands on trainee pilots The successful development and quick manufacture of the IJT would allow its time tested “three-stage” training to continue.

That would also mean HAL aircraft are used in all three stages of IAF flight training. HAL’s basic trainer, the Hindustan Turbo Trainer – 40 (HTT-40), is doing well in flight testing and is expected to join the fleet alongside the Pilatus PC-7 Mark II trainer. HAL has also manufactured the Hawk AJT fleet in Bengaluru, under licence from BAE Systems.

However, the IJT’s development trajectory has been troublesome. In 2016, flight testing was put on hold after the trainer experienced difficulty in pulling out of spins – something that inexperienced pilots cannot be exposed to.

In December, the IAF requested to close down the IJT project. However HAL asked the defence ministry (MoD) for time to rescue the programme. HAL offered to return the IAF the Rs 3,000 crore it had paid towards an order for 73 IJTs. HAL’s board allocated Rs 50 crore in company funds to take forward the IJT’s development, supplementing the Rs 600-700 crore it had already spent.

Senior HAL sources tell Business Standard the IJT has undergone an extensive two-year redesign process, guided by design consultancy from US firm, Birhle, to help the aircraft pull out of spins. This was achieved by shifting the horizontal fins and rudder further down the fuselage. Now mathematical modelling indicates the redesigned IJT is well equipped to handle spins.

“We will have to conduct at least another 200 test flights to validate the IJT, including its stall and spin characteristics. But we have built 13 aircraft already and we can finish this without undue delay,” says a senior HAL designer.

HAL designers also say many useful lessons have been learned from the development of the HTT-40 basic trainer. That expertise is now being fed back into the IJT.

An example of this is the HTT-40’s modern all-glass cockpit, which will be retro-fitted into the IJT. In addition the safety equipment for stall and spin testing is being used in the HTT-40 and will be also used for the IJT.

With the service life of the Kiran Mark II having recently been extended by four years, the IJT has that much time to enter service in numbers.
Posted by Broadsword at 16:39

INDIA must have 80 squadrons capable aircraft to fight Pakistani+Qatar+Saudi Arabia+UAE+Egypt and Chinese Menace in one go. say equallilng 1440 capable aircraft as 12th Generation fighter will come out of closet better than AMCA and US F-35+F-22 6.25 generation fighter, Eu 6th Generation fighter as SAM too will improve with Aakash NG and my Cosmic Ray anti-missile system. At present we have an underprepared airforce though I have given technology to improve all old indian aircraft to F-22 standard and some to F-35 standard and beyond. This include Mig-23 in warehouse and Mig-21 Bis and Bison, Jaguar, Mirage-2000-H-5 upgrade, Mig-27 (told to retire is better option or upgrade), Mig-29 and Sukhoi-30MKI. Upgrade do include Rafaele and about to purchase Eurofighter and Su-57 with Idzeliye 117 engine. Idzeliye 30 engine they say Russia and others will not be able to produce. Only India with my help will be able to do so.

1/2
I really ask myself why HAL is always into trying to do like the others, I mean... Why coming with IJT while there is already a serious fleet of BAe Hawk and so it will again create a logistical millstone, and same thing about HTT-40 which also comes with the same job as the Pilatus...
I'm not judging the qualities of IJT or HTT-40, they are just doing the same job and I find it totally odd, not to say dumb, to proceed in such a way as R&D, even for a propeller aircraft is costly, and having 2 types doing exactly the same thing, in lower numbers than 1 single type, is bad for both a scale economy effect, but also for maintenance.

HAL would better had came with different things. I'm gonna provide two examples that moreover would be highly exportable.

1.) COMBAT CAPABLE ADVANCED JET TRAINER.
If we all agree that Tejas Mk1 is not totally satisfying despite having undeniable qualities and still in need of improvements, it's already there and as it's nor definitive as a fighting asset, only the dual seat version should be produced. Moreover, I came to know that there were already batches of GE F414 purchased.
F414 is just a more powerful version of F404 and a drop in replacement.
OK, Tejas Mk1 lacks of internal fuel...
There'd be a simple mod to do! Just add conformal tanks and as we are the refuelling probe.
The ones with F404 may end with more limited payload but would still be more than able to carry several AAMs or doing air police job, the ones with F414 may have pretty interesting payload without needing to stretch the fuselage like wished for Tejas Mk2 according to Saab's advising to apply the same recipe as Gripen-E.
While waiting the Rafale's offset induced mods are applied that will make Tejas a real beast, the F414+conformal tanks on Mk1 really do sense!
And remember that if Lockheed P-80 didn't made a long carrier as a fighter, its T-33 training version was only retired in 2017 while it had been introduced in 1948...

2.) DUAL PROPELLER MULTI FUNCTION AIRCRAFT.
- Form factor similar to a stretched OV-10 Bronco, Kevlar skin, Ceramic/Titanium protection for cockpit+engines; self-sealing fuel tanks
- 2x PT6C-67A (1940hp) engines or PW127 (2619-3058hp), Shaft linking the 2 propellers allowing to loiter on a single engine
- Honeywell TFE731-5R (20kN) or Williams FJ44-4M 16.87kN or Ivchenko-Progress AI-222-25 (non afterburner version) 24.7 kN to be fit on the back
- Refuelling probe. BRS recovery parachute. Link 16, SATCOM, Terrain following system, etc, optional folding wings for aircraft-carrier use.
- STOL. Take-off/landing in no more than 185m at MTOW (27t MTOW Bréguet 941 could take off in 185m and land in 120m with 4x 1450hp engines). The kind of Landing gear Bronco had shall be maintained
- TWO belly gun-turrets, each with a GIAT 30M791 or GSh-30-2 or GSh-30-2K with no less than 2,000 shells, a small magazine should be considered with 30mm guided shells for sniping purposes.
- 6 hardpoints, each rated for up to 1,500kg enough spaced to use TERs (triple ejector rack)with such pods :
http://tinyurl.com/yyvttytp
I'd highly suggest to conceive custom pods for 7x MBDA Zuni-LG (laser guided Zuni)
https://tinyurl.com/y3xy3kmx
While a LOGIR guidance kit (with the right contrast to go after land targets, unlike the K-LOGIR which's contrast s only OK for sea targets)
https://tinyurl.com/y3uakr9e
=> If fit with 6x launchers for 7x Zuni-LG and 12 LAU-61 G/A DRL (Digital Rocket Launcher) each with 19x LOGIR/Hydra-70, you can go after 42 MBTs and 228 IFV/APC/Technicals/medium-tanks or artillery/mortar/combat posts, tactical teams etc : a Zuni warhead is twice as powerful as a Hellfire, a Hydra-70 is on par with a TOW ATGM
=> Airbus C-295 has 2x 2645hp engines and 9,250kg payload

2/2)
So, what would we have here?
Something that could be used as a trainer for cargo aircraft, a STOL strike aircaft able to operate from ultra rugged terrain or pretty small LHD with more destructive power than a A-10, one can absolutely dismiss gunship choppers as much as AC-130. More survivability than choppers, capability to loiter for many hours like drones, low cost of use+purchase. About 65 of these could enforce a 24/7 no drive zone and immediate close air-support response in an area as big as Azat Kashmir with a much lower cost than deploying a single squadron of fighter-jets. The effect of a dozen of these on an invasion would compare with the infamous 1991 Highway of Death, except that no need to create a traffic-jam...

Just a total nightmare for mujahideen, especially since the 10km+ range of the guided rockets puts you our of range for any ManPADS or AA-guns.
One could even consider a modular aircraft where the central pod could be replaced by a cargp/passengers module (think IAI Ara), there is potential to replace E-2 Hawkeye and other AEW&C (Erieye, etc), ELINT, JSTARS, ASM, ASUW, eventually COD/cargo, firefighting. If made modular, a civilian version, maybe without jet engine, could likely achieve sales, thanks to the STOL features and benefit from scale-economy, thanks to dual-use.