Viewpoint: How far might India go to “punish” Pakistan 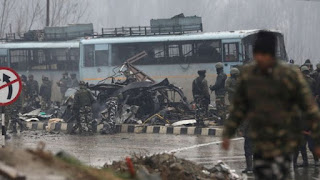 A suicide attack killed more than 40 members of the Indian security forces in restive Indian-administered Kashmir on 14  February. Threats from Indian leaders, who face a tricky general election before May, raise the spectre of Indian military retaliation against Pakistan for “state-sponsored terrorism”, writes Indian defence analyst, Ajai Shukla.

Indian Prime Minister Narendra Modi has pledged to give security forces free rein to respond to the militant attack – the deadliest in the region in three decades. Home Minister Rajnath Singh blamed Pakistan for the attack and threatened a “strong reply”. Influential Indian television networks are baying for revenge.

The car bombing has been claimed by the Pakistan-based Jaish-e-Mohammed (JeM), which numerous countries, as well as the United Nations, have designated a terrorist group. Its leader, Maulana Masood Azhar, was captured and imprisoned in the 1990s by Indian forces. He was later released as part of a hostage exchange after an Indian airliner was hijacked to Kabul in 1999. New Delhi has always held Pakistan responsible for that hijacking.

For several years now, India has been pressuring the UN to designate Azhar a “global terrorist”, but China – a close ally of Pakistan – has repeatedly blocked that move.

The involvement of the Jaish to the car bombing directly links Pakistan to the attack. In 2001, a Jaish suicide squad had attacked the Indian parliament, killing nine security men and triggering an Indian military mobilisation against Pakistan that kept the two countries on the brink of war for months. In 2016, Jaish attacks on Indian military facilities in Pathankot and Uri resulted in the Indian army launching “surgical strikes” on Pakistani military targets and terrorist camps across the Line of Control (LoC), the de factoborder that divides the state of J&K.

This time, the right-wing Bharatiya Janata Party (BJP)-led government could feel pressured to do more. The 2016 strikes were deliberately limited in time and choice of targets, allowing Pakistan to deny that they took place at all. The Indian military has acknowledged contingency plans exist for punishing Pakistan more severely in the event of a damaging terrorist attack. But all such plans carry the danger of retaliation and uncontrolled escalation. This fear is exacerbated by the fact that both countries possess nuclear weapons. Pakistan has repeatedly signalled it would not hesitate to use them.

For now, Pakistan’s foreign office has tweeted its “grave concern” and rejected “any insinuation by elements in Indian government and media circles that seek to link the attack to State of Pakistan without investigations.” However, given that the Jaish has claimed credit for the car bombing and Masood Azhar roams free in Pakistan, Indian public opinion is unlikely to demand much more by way of proof.

Pakistan’s central intelligence agency, the army-controlled Inter-Services Intelligence (ISI), faces a conundrum with regard to the Jaish. Unlike the Lashkar-e-Toiba (LeT), which unquestioningly follows the politically dominant Pakistan Army’s diktat, the Jaish has not shrunk from attacking Pakistani military targets, including two deadly bomb attacks on General Pervez Musharraf in 2003. Given the Jaish’s utility in keeping the Kashmir pot bubbling, the Pakistan Army has turned a blind eye towards it so far. It remains to be seen whether serious pressure from India – and possibly from China, which might believe it has gone far enough in sheltering Azhar – could result in a shutdown of the Jaish.

Away from the geo-politics, there is also an important local dynamic to the car bombing. Over the last year, Indian security forces have killed almost 300 Kashmiri militants in the Valley, with most of them from the South Kashmir pocket where the car bombing took place. The under-pressure militant groups, therefore, faced a pressing need to reassert their presence with a high-visibility attack. The predominant group in the area, the Hizb-ul-Mujahideen, regards suicide attacks as anti-Islamic. That left the onus on the Jaish and the LeT.

For India’s security establishment in J&K, this was an unalloyed intelligence disaster. The police and intelligence agencies face questions over how the Jaish managed to stage such an attack, which involved rigging up a car with a large amount of explosive, carrying out reconnaissance, rehearsals and penetrating several layers of security to reach their target.

For now, the Indian establishment is weighing its options. A union cabinet meeting the morning after the attack has decided to withdraw the economic Most Favoured Nation (MFN) status that New Delhi granted Pakistan, without reciprocity. But, in the absence of any Pakistani action against the Jaish, there would be more to come.
Posted by Broadsword at 17:37

WITHDRAW YOUR EMBASSY FROM PAKISTAN AND CHINA ASAP

Question is how are we going to fix this problem in J&K?

We must be cold and calculating to understand our opponents, here is an insiders account on your BBC link above:


BJP have made a mess of the already bad situation, this COAS has not helped matters either with his choice of words.

Below is a small sample of what is in the above article. We must understand these people, if we want them to be part of us. At the moment they are becoming more like their kith and kin across the border in PoK.


"
As the body of the militant, draped in green, is finally laid to rest, women sing songs of blood and valour. The body is placed on a makeshift platform so mourners can get a good view. People raise their hands in reverence to touch the body.

Young men push through the jostling crowd to kiss the militant's forehead. Then they touch his feet and rub their hands on their body, as if performing a religious ritual.

The crowd swells with every passing minute. Slogans of defiance rent the air. A group of teenagers grab the microphone, exhorting mourners to continue their "struggle" by singing songs of defiance. The "celebrations" continue till the body is buried in the "martyrs graveyard".

What will be the consequences of an attack on Pak land?

Some are saying lets capture POK. We can do that....So can they. Then what?

What if they destroy our dams in J&K? We attack theirs in Pakistan proper. Then they attack ours in India proper. Same goes for power plants. Before you know it we are back in the 1950's again or worse now with more than double the population to feed.

These bakhts have led us into a cul de sac and they can't see beyond their noses.

Insurgency in history never come from the poor and uneducated, rather it come from the middle classes, in Kashmir it morphed from the second and third generation of grievance. It is from amongst this emergent Kashmiri educated demographic, that we will get the suicide bomber, the future Kashmiri IED maker, but also the future ideologues,writers and poets that inspire popular rebellion.
The Kashmir conflict, for years, sponsored by Pakistan has become self sustaining and indigenous.
University lecturers, doctors, school teachers, graduates all part of the intelligentsia are now joining the insurgents and taking over the leadership.
Pakistan for long has kept it manufactured insurgency in Kashmir on a short leash, to be used as a constant bargaining chip with India. Pakistan turned on and off the tap of attacks as it suited them, maintaining low level asymmetric war, without it escalating into a full blown war.
Pakistan doled out frugally, weapons and explosives to keep control and ensured for the Kashmiri fighter that his direction always came from Pakistan, his leaders firmly in the training camps of the ISI.
This is all changing - the diktat is slipping from Pakistan the people of the valley have found their own struggle amidst the troubles of past decades.
The new insurgents are short of weapons but not recruits, the ratio is of ten recruits to one weapon, explosives are in short supply, skilled IED makers are just in their embryonic stage, the gentle Sufi religion of the valley is slowly being replaced by the fanatical death cult of Jihad Islam.
As Pakistan loses control over their proxy, can we expect the this new Kashmiri insurgents to constrain themselves, keep to previous Pakistani limits and boundaries?
How long before an attack on the Indian mainland? How long before attacks on civilians and soft targets?
The Indian Jackboot is not the answer, the situation will become worse. Do we want to eventually intern the entire muslim male population of region between the ages of 16 and 60, approx 3 million people, for re-education in mass internment camps, like those for the Uyghur in Xinjing?
Following the Chinese example will make it difficult to justify our claim to being the biggest democracy in the world - that is unless the Chowkidar leads us into a fascist state by winning the next election.
Jai Hind.

need war across loc and gilgit baltistan , if this option is not excercised then govt can't do much . forget about free Baluchistan
as somebody said.

kill or be killed is only option.

@Anon
They're quite happy to celebrate one to two martyrs a year.
See how happy their songs are when it's the 50,000th funeral that week.

The only sensible answer was a wide, shallow invasion across the entire front, which was the whole point of "cold start"

There are a lot of options available. What is lacking is the will to exercise them. Let us be blunt. Our politicians are cowards...period..

since the PM has already announced that punitive action will be taken, there is no choice left. we have reached a stage of no return. this situation cannot go on forever. the costs we have incurred over the last 30 years of fighting in terms of deployment, logistics, compensation is much higher than a cost a conflict would incur.