A quick look at the Mirage 2000 multi-role fighter 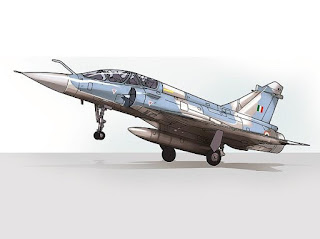 Inducted in the 1980s to counter the Pakistani F-16, the Mirage 2000 was India’s first “multirole” fighter, capable of shooting down enemy aircraft as well as ground strikes on the enemy.

In the 1999 Kargil war, Mirage 2000 fighters played a prominent role, having been “jury rigged” to carry precision-guided bombs.

In 2000, the Indian Air Force and Dassault, which built the Mirage 2000, proposed shifting the entire production unit to India, where 126 more Mirage 2000s could be built, to replace the IAF’s retiring MiG-21 fleet.

This was turned down by the NDA government of that time, and a fresh tender issued for 126 MMRCAs, which the Dassault Rafale finally won in 2012.

The Mirage 2000’s strong multi-role capability made them a natural choice for the cross-LOC strikes.

The Mirage 2000’s Thales RDY2 radar tracks air and ground targets at long ranges. Its new MICA missile can strike enemy aircraft at “beyond visual range” and strike ground targets from up to 80 kilometres away with the Crystal Maze bombs under its wings.

These fighters are being upgraded to the Mirage 2000 I standard by Hindustan Aeronautics Ltd (HAL) under a Rs 17,547 crore contract.
Posted by Broadsword at 08:53

This is useful information sir. I am curious - why is this post so colourful :D
- Tanuj

3 Rafale can carry as much strike power as entire squadron of Mirage-2000. Just in case this article is also anti- Modi attempt. If UPA had not delayed the Rafale acquisition, more targets could have been struck with smaller risk.

Pakistan admires the courage and dignity shown by the Indian pilot of the downed MIG.
We all have seen the videos on twitter and social media
We trust the our army would extent its full hospitality and honour to our prisoner, an officer and a gentleman.
All good Pakistanis have their sympathies with his wife and young child in their difficult time.
We hope our government would sooner rather then later be in a position to release the wing commander so that he is reunited with them.
Bravery and diginity in adversity has no nationality, we salute this Indian officer.

India must immediately order 18 Rafales without any hesitation at all...
The fighter per cost will be lot cheaper as there will be no more India specific costs...

India must build additional 54 Rafales in India with as much as manufacturing and maintenance technology as possible...

It is a nation security distress need...everyone must support it...

All discussions is swell. Sh Rahul Gandhi has gone over board over the Rafael deal of 2016 for 36 jets. Will Gandhi give us a detailed explaination as to why his government utterly failed to sign the Rafael deal although during the UPA regime the squardon strength of IAF fell from 42 to 33 squardons

"Anonymous said :
"NSR says ---
India must immediately order 18 Rafales without any hesitation at all...
The fighter per cost will be lot cheaper as there will be no more India specific costs...
India must build additional 54 Rafales in India with as much as manufacturing and maintenance technology as possible...
It is a nation security distress need...everyone must support it..."

1/2.)
=> In fact, it surely was a terrible mistake to reject Dassault proposal to relocate the Mirage-2000 production in India, now India faces serious problems of attrition when it comes to fighter-jets...
Taking 11 years to decides which aircraft to chose in the MMRCA contract, thanks to AK Antony, then 4 more to not sign the contract, thanks to Parrikar, well, IAF is at the crossroad with 2 thirds of the inventory being worn out... I even have a hard time to believe they can push the 40y old Jaguars and the 30+ year old MiG-29 to 2030-2032...
The 14 Su-30MKI squadrons are near completion of delivery,
What is needed NOW is ordering 28 squadrons, 14 light weight and 14 mid-weight and really fast track the decision as it's really becoming urgent, especially since you need 2 years to build an assembly line and 2 more to start deliveries...

So, what are the best available solutions?
A.) LCA
========
1.) The offset on the Rafale deal requires the Rafale team's help to finalise Tejas and... They already provided everything necessary :
a. RBE2/AESA radar is already adapted to Tejas nose, flight-tested and approved by DRDO.
b. The refuelling probe similar to Mirage-2000/Rafale is OK.
c. Thales made a standalone version of SPECTRA's active stealth for Tejas
d. Safran created a 98kN version of the M88 engine, it has already been approved under the moniker Kaveri K9+ by DRDO. Flight tests are to be done in 2019. Note that the engine will allow to fly as much as Rafale does : 5-6 daily missions and even 10-11/24h in intensive use for a full week (not tested further).
e. Dassault already provided blue-prints nonetheless to adapt M88 into the airframe but also to add about 1000L more fuel inside and improvements to the structure which will make the airframe lighter and more solid. How to add 1000L fuel? Simple! M88 has 1.08m^3 less volume than GE F404 or F414.
Here we have a Tejas with as much fuel as Mirage-2000, more thrust and ending 1.4-1.5t lighter... No need for a Tejas Mk2, the Mk1 airframe will do the job!
Made this way, Tejas is a mini-Rafale!
f. Dassault even included a BRS recovery parachute! In case of mechanical failure, the aircraft is likely to be recuperated!

B.) MMRCA
==========
Hey, Rafale has already won the competition, what's the difference in MMRCA 2? F-16? LOL! F-16V is even more expensive than Rafale and isn't stealth at all. Even with systems degraded at 50% of their capabilities, Rafale managed to ram F-16 during drills, and the hard way!
Dassault already built a factory with Ambani, other members of the Rafale team are doing so, 50 subcontractors have already settled in India, Dassault is already building the Falcon-2000's cockpit in India BTW.
Maintenance facilities are ALREADY in place.
Moreover, the 1st Rafale contract includes re-investing the €3.9bln offset in India...
Add to this that there are 18 optional Rafales in the 1st contract.
BTW, they're much less cheaper at flyaway cost level many think : through recoupment, I ended with an average $73M! Su-30MKI ending with a $76M figure before the Super-Sukhoi upgrade making Su-30 a Su-35. Considering F-16V as an alternative is ridiculous : Iraq paid $85M per F-16V and a Rafale does the job of 3 F-16...

And some potential for...
56 Naval-Tejas
There may also be 57 Rafale-M more since I wouldn't be surprised would there be a 2nd Vishal-class : INS Vikramaditya has been launche in 1982 and commissioned as 'Baku' in 1987, as a 2nd Vikrant-class has potential to appear too...

Now, there are other problems :
It takes 2 years to create an assembly line, then 2 more to start deliveries. If decisions are taken now, deliveries would start in 2023.
The Tejas assembly line cane provide 8 units a year. A 2nd is already in construction, but consdering the numbers needed, it'd require to convert the Su-30MKI assembly line (16 units per year) to Tejas, this would mean 32 units per year, maybe a 5th line might be necessary in order to produce 40 units/year. A Rafale assembly line can build up to 18 aircraft a year. It's obvious 2 assembly lines are needed.
Starting 2023, this would take 7 years to deliver the 255 units needed and 9 years if a 2nd Vishal-class is considered...

Now, the fact is that, considering the costs, if the govt can order HAL to set up two more assembly lines without orders, the private sector don't work this way! They need firm orders first.
Orderin 198 Rafale-C/B would cost $14.5B, added to $1.32B for 18 addititional units to the 1st contract, 57 Rafale-M an additional $4.8B... This would mean a $20.6B order...

If we expect the "Super-Tejas" to cost $40M/unit, this would mean $12.3B.
This is clear that announcing a $33B order (for 563 aircraft) would be seen as enormous... Nevertheless, this would be scheduled over 11-13 years, so... $2.5-3B a year considering India's military budget being about $60B a year is not a too sick expense, especially knowing that incompetent AK Antony and Parrikar have put serious brakes on procurement of fighter aircraft.

Ordinance carrying capacity
Mirage 2000 : 6300kg
Rafale. : 9500 kg
Firepower of one Rafale is equivalent to 1.5 Mirage 2000, hence three Rafales will have the first power of 4.5 Mirage 2000, which is not one squadron but just about a third of a Mirage squadron. Do not underestimate Mirage 2000, it is one of the most or should I say the most reliable multi role aircraft available with IAF

Sudip Das :
In fact, Rafale can take off with 12t payload and half fuel, then be mid-air refuelled.
There is already a M88-9 engine with 91kN thrust available and Safran has created a 98kN version, the 98kN M88/Kaveri K9+
You forget another point : Rafale can do 5-6 daily missions and has even been pushed to 10-11 missions per 24 for a full week, and at squadron level with 95% availability taking off from the French aircraft carrier, and it wasn't while doing drills but in a real war : 2011 Libyan campaign.
And I do not underestimate Mirage-2000 : we still operate them, but... And Rafale has no stealth features.
If IAF has QER and TER racks prepared for Rafale, it can been flown in what Yankees call "beast mode" :
Consider two conformal tanks then 5 QER and 2 QER : 26x Meteor and 4x MICA-IR. A really expensive payload for sure, but truly a flying arsenal enough to go after a full squadron, likely the full February Paki strike-pack.