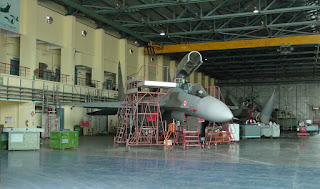 To alleviate the shortfall of fighter aircraft in the Indian Air Force (IAF), New Delhi has approached Moscow for one more squadron of Sukhoi-30MKIs fighters.

Production of this additional tranche can begin in 2020, when HAL Nashik completes delivery of an on-going contract for building 222 of the twin-engine, heavy fighters.

Russia’s defence export agency, Rosoboronexport, is currently working on an offer and a price. It is understood that the existing Russian licence for building 222 Sukhoi-30MKIs in Nashik would be extended to 18 more aircraft.

At HAL Nashik’s current price of about Rs 450 crore for each Sukhoi-30MKI, the IAF can expect to pay over Rs 8,000 crore for 18 new fighters.

Before HAL Nashik began building Sukhoi-30MKIs under licence, the IAF bought 50 fully built Sukhoi-30MK fighters in the late 1990s, which were later upgraded to the MKI configuration. Including them, the IAF planned to fly 13 squadrons of the Sukhoi-30MKI – or 272 fighters.

If the new request for 18 more fighters translates into a contract, the Sukhoi-30MKI fleet size will go up to 14 squadrons, or 290 fighters.

Contacted for comments, the IAF and HAL have not responded.

The Sukhoi-30MKI has been a “Make in India” programme well before it became a buzzword for indigenisation. The Sukhoi-HAL production contract mandated that Sukhoi-30MKI production in Nashik would be incrementally indigenised in four phases. HAL would build the fighter from completely knocked-down kits (CKD) in Phase I, from semi knocked-down kits (SKD) in Phase II, and then progressively indigenise manufacture in Phases III and IV, which have already been achieved.

Even so, various constraints have restricted indigenisation to just a little over 50 per cent of the value of each Sukhoi-30MKI.

A key reason for this is that most of the raw materials, including 5,800 types of titanium blocks and forgings, and aluminium and steel plates, must be sourced from Russia.

Reducing these to aircraft components, using Sukhoi’s manufacturing technology, results in enormous wastage of the expensive metal. A titanium bar from Russia weighing 486 kg is machined down to a 15.9 kg tail component. The titanium shaved off is wasted. Similarly a wing bracket, weighing barely 3 kg, comes out of a 27-kg titanium forging imported from Russia.

Yet, India continues to import titanium extrusions because manufacturing them here is not economically viable in the tiny quantities needed for Su-30MKI production.

Similarly, the HAL-Sukhoi production contract stipulates that 7,146 “standard components” like nuts, bolts, screws and rivets must all be sourced from Russia.

The IAF got its first Sukhoi-30s in the late 1990s, after India signed a $1.5 billion contract for buying 50 fully built Sukhoi-30MK fighters. In 2000, a memorandum of understanding was signed with Sukhoi for the staggered production of 140 Sukhoi-30MKIs. These would be built in HAL’s Nashik plant and progressively delivered by 2017-18.

Subsequently, in addition to these 190 Sukhoi-30MKIs, India bought 82 more fighters in two additional tranches. One tranche of 40 fighters was ordered in 2007, and another 42 were ordered in 2012.

Since buying the first Sukhoi-30MKIs in 1996, the aircraft has been substantially improved. First, with the IAF demanding better aerodynamic performance, Russia added canards and a thrust-vectoring engine, the AL-31FP, which can push the fighter in multiple directions, adding agility. Then, the IAF specified a sophisticated avionics suite, creating the “MKI” configuration – with I standing for India.

In 2014, HAL integrated the BrahMos air-launched cruise missile (ALCM) onto the Sukhoi-30MKI. This allows the fighter to carry the missile over a thousand kilometres and then launch it at a target another 295 kilometres away.

If concluded, a contract for 18 more Sukhoi-30MKIs will be welcomed by both the IAF and HAL. The air force, which is down to 30 squadrons and faces further reductions as MiG-21s and MiG-27s retire, will welcome another squadron of their backbone fighter. For HAL, this will mean another 18 months of production for their Nashik facility, which faces an uncertain future after the Sukhoi line closes.
Posted by Broadsword at 07:42

Why doesn't the government ask HAL to produce a reverse engineered Su30? Let it be a purely experimental project to test our capabilities. If we can successfully indigenize Russian cryogenic engine, we can indigenize the Su30 too! We need to get rid of our helpless dependence on foreign vendors - it's doing us no good!

We need more as pakistan will get chinese STEALTH TECHNOLOGY soon

India should opt for Super Sukhoi configuration with improved engine, avionics and latest AESA radar and give 18 nos to Russians and 36 nos to HAL with full TOT...
This will enable HAL to upgrade all the older models to latest Super Sukhois...

So essentially, these along with the 8 aircraft the IAF is thinking of ordering as replacements of crashed aircraft's will mean a total of 26 aircraft's. Might as well do it while the production line is active.

Col Shukla, could you please do an article about the detailed analysis of the cost of maintaining older fleets of fighters like the Mig21, Mig23, Mig29s, Jaguars and Mirage 2000's. Basically how much money from the operating budgets of these aircraft's are being used in maintaining older fighters.

There is a reason why air force's worldwide are restricting the number of fighters to 1 to 3 types of fighters. The reason being that it is very cost effective and its extremely useful in a tactical scenario. IAF airbases need only hold maintenance equipment for 2 or 3 types of fighters. Which means that fighters can be redeployed anywhere across the country on an urgent basis. Which is very valuable from a tactical/strategic perspective.

For the IAF it should be the Su30MKI, Rafales and Tejas. Having only 3 different types of fighters would mean that the IAF can concentrate any upgrade programs on these fighters only.

Of course this logic should be applied to other platforms as well.
1 type of refueling aircraft
1 type of AWACS
1 type of strategic airlifter (We have IL-76MD and C-17s basically doing the same thing albeit with different capabilities)
1 type of heavy transport
1 type of medium transport (Avro's and AN-32 are basically copying each others role. They should be replaced by the C-295 with the contract given to private sector, in this case I guess the Tata's had a JV with Airbus)
1 type of light transport

As far as helicopters are considered I cannot understand why the IAF has taken on the tactical troop transport and CAS missions. Frankly speaking the only scenario I see them using transport and attack helicopters is in CSAR missions for downed pilots. All rotary wing assets should be handed over to the AAC apart from those required for CSAR. For the CSAR missions LCH and Dhruv/Rudra should be more than enough. All Chinooks, Apache's, Mi-17V5's, Ka-226Ts/HAL LUH (If we get them) should be handed over to AAC. Older Mi-26 and Mi-35s should be retired as soon as the Apache's and Chinooks arrive.

With Trainer's we are doing a bit better. If the IAF is not willing to get the HTT-40 in the stage 1 training role then the MOD should get them for Stage 2 training role. This will of course further the aerospace industry in India.

Lastly the IAF and HAL should bury all their differences and should remember they are all working for the benefit of the nation. This should be the primary mindset in all the higher ups in the IAF and HAL.

What would have been the cost and timelines if these aircraft were directly brought from Russia?
Direct supply is always cheaper and faster.

What technology absorption have we achieved if we cannot even make screws and rivets after 'manufacturing' 222 aircraft? That too when Indian private engineering industry is sourcing even to global brands like Benz and BMW.
Technology absorption by PSU is a myth.

Officer cadre in HAL is good and responsive, but tradeunions have the ultimate say. They dont spend more than 4 hrs in shop excluding break sessions. We cannot let trade unions of PSUs govern our natioal security
Competitive private companies can do wonders in defence industry.