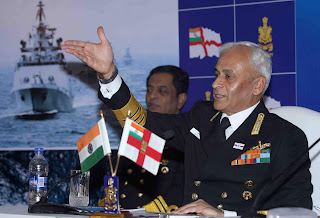 Chief of Naval Staff Admiral Sunil Lanba revealed on Monday that the navy has encashed bank guarantees provided by Reliance Naval and Engineering (RNAVAL), after the latter failed to deliver even the first of five naval offshore patrol vessels (NOPVs), which were supposed to be delivered between November 2014 and November 2016.

Answering a question from the press in New Delhi about preferential treatment to RNAVAL, Lanba stated: “Reliance Naval’s bank guarantees have been encashed by the navy. So punitive action has been taken against [RNAVAL]. It is a process which is moving forward.”

Lanba clarified the NOPV contract has not been cancelled yet, though further action might be in the offing.

“It has not been cancelled at the moment. But the contract is being looked at and being examined and what we need to do with it,” said Lanba.

Asked whether RNAVAL is allowed to take part in navy shipbuilding tenders, Lanba appeared to duck the question. “There are no tenders which have been issued as yet,” he said.

The defence ministry is understood to be evaluating whether to allow RNAVAL to bid in warship tenders, given its precarious finances. Lanba confirmed that IDBI Bank has taken RNAVAL to the National Company Law Tribunal (NCLT), seeking debt resolution. An 18-member consortium of lenders reportedly declined RNAVAL’s settlement offer for Rs 9,000 crore (Rs 90 billion) in outstanding loans.

At least one lender – Vijaya Bank – has classifed its loan to RNAVAL as a non-performing asset. RNAVAL’s auditors, Pathak HD & Associates, have noted that cash losses, erosion of net worth, recalled loans and other adverse indicators “may cast significant doubt on the company’s ability to continue as a going concern.”

Meanwhile, senior RNAVAL sources say work continues in its Pipavav Shipyard in Gujarat to build and deliver the NOPVs. RNAVAL’s website still states: “RNAVAL… is in the process of design and construction of five Naval Offshore Patrol Vessels for the Ministry of Defence. Production of first two vessels has commenced and pre-production activities for the other three ships are already in progress.”

The website does not mention the delay in production and delivery – which is currently over four years, and counting.

The MoD’s indecision over whether to permit RNAVAL to bid in warship tenders is holding up warship tenders that industry estimates to be worth Rs 63,000 crore (Rs 630 billion).

These include a tender worth an estimated Rs 20,000 crore, for building four Landing Platform Docks (LPDs) in India – large vessels that carry helicopters, tanks and vehicles for amphibious landings, or for disaster relief.

There are no questions over the eligibility of the four DPSU shipyards – Mazagon Dock Ltd, Mumbai; Garden Reach Shipbuilders & Engineers, Kolkata; Goa Shipyard and Hindustan Shipyard Ltd, Visakhapatnam. Private shipbuilder L&T has earned the MoD’s confidence with its ahead-of-time-delivery of OPVs for the coast guard. However, tendering remains held up by one question: Is RNAVAL eligible to participate, given its building record and financial condition?

RNAVAL was formerly known as Pipavav Defence and Offshore Engineering Company Limited (PDOECL). After Anil Ambani acquired a majority stake from its earlier promoter, Nikhil Gandhi, the name was changed to Reliance Defence and Engineering Limited, and then to RNAVAL.
Posted by Broadsword at 08:08

This Govt moves slowly but surely on evidence.
Same time Modi and his colleagues are very careful not curse industrialists.
The pvt sector is lifeline in any country. They give taxes provide jobs.
How ever they have been tightening laws for bank loans and taxes.

This professionalism is something guys like prashnat bhushan, Arun shourie, Rahul Gandhi have to learn.
Even in case of DRAL, if reliance does not deliver, they will force it to sell it’s stake to someone else . (See ILF&S)
If you see any country such things are common.

So please stop politics in your blog !

Well, it seems an open and shut case to me. RNAVAL has proven unable to deliver, the bank guarantee had to be enchased - so clearly they must be disqualified. The real scandal would be if - as you say - the MOD is holding up new shipbuilding orders in order to favor RNAVAL,
despite the critical strength imbalance faced by the Indian Navy. At a time China is expanding aggressively into the Indian Ocean, and other shipbuilders are ready and able to build warships in tune with the Navy's needs, this is criminal. The Defense Minister must be held answerable.

If the expected date of delivery was 2014, the order to Reliance must have been given by the UPA Govt. Why did UPA govt engage a company who had no experience in ship building? My guess, corruption.

blacklist RNAVAL forever, take over their shipyard and convert to DPSU, nominate orders to them and close the chapters. there should be no pvt players in defence and hence this way no corruption!!