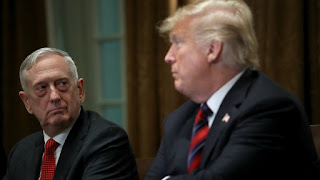 If Trump chooses a more pliable successor as secretary of defence, the Pentagon's attention could go off India

The announcement on Friday that General James “Mad Dog” Mattis would soon step down as US defence secretary un-tethers the US-India relationship from its sturdiest peg and exposes New Delhi worryingly to the unpredictable policymaking of President Donald Trump’s administration.

Since January 2017, Mattis has been the most steadfast votary in Trump’s cabinet of the US-India defence relationship. In September 2017, he became Trump’s first cabinet level official to visit India. Since then, he has taken consistently pro-Indian stands on issues from Afghanistan to the Indo-Pacific.

In June, Mattis re-designated the US Pacific Command (USPACOM) – the Pentagon’s largest geographical command with about 375,000 personnel and 60 per cent of the US naval fleet – the US Indo-Pacific Command (USINDOPACOM) in a nod to India’s growing influence as Washington’s most valuable regional partner.

In September, Mattis ignored Pakistan’s longstanding demands to keep India out of Afghanistan, instead seeking India’s assistance and involvement in helping to stabilise that country.

When the US Congress -- furious at Russian meddling in America’s 2016 presidential election, and at Trump’s reluctance to retaliate against Moscow -- passed a law titled “Countering America’s Adversaries Through Sanctions Act” (CAATSA), it was Mattis who strongly pushed for a waiver to save India from US sanctions that would kick in from buying weaponry from Moscow.

With Mattis lobbying vigorously for India, the US Congress legislated a waiver from CAATSA. Mattis strongly supported New Delhi’s argument that India’s large arsenal of Russian weaponry did not allow it to make a clean break.

Eventually, the National Defense Authorization Act, 2019 (NDAA 2019), which the US Congress passed in July, created a waiver for close US partners like India. Although Trump has not yet provided India a waiver from sanctions for buying the $5 billion S-400 air defence system from Russia, he is expected to do so.

Mattis also supported another section in NDAA 2019 that reinforced and fleshed out India’s bespoke designation as a “major defence partner” (MDP) of the US. While the Obama administration had accorded India that designation in its closing months, NDAA 2019 required the administration to submit a detailed annual report to the US Congress on what it was doing to enhance bilateral defence ties.

Pentagon insiders recount that, in all of this, Mattis lobbied Congress relentlessly on India’s behalf.

On July 30, India’s status as a MDP led to its categorisation as a Strategic Trade Authorization (STA) Tier 1 country in the US Commerce Department’s export regulations. Mattis played a role in this upgrade as well, anticipating that it would facilitate the flow of defence equipment to India.

“This regulatory change will enhance the bilateral defence trade relationship and result in a greater volume of US exports to India,” stated the US Department of Commerce after announcing the STA upgrade.

Mattis also pushed through the Communications Compatibility and Security Agreement (COMCASA) -- a milestone pact that was signed at the inaugural US-India “two-plus-two” strategic dialogue in September, in which Mattis and Secretary of State Mike Pompeo together met Defence Minister Nirmala Sitharaman and Foreign Minister Sushma Swaraj.

COMCASA had languished in the pipeline for over 15 years, but Mattis persuaded New Delhi to sign the agreement. It will allow the American and Indian militaries to operate together, communicating on secure channels and equipment.

Since the start of Trump’s presidency, Mattis has taken forward the legacy of his predecessor, Ashton Carter, who was similarly India’s ablest votary in Washington. However, Carter functioned in the relatively stable Obama administration where the White House itself strongly believed in the India relationship. With the Trump White House otherwise preoccupied and an unstable State Department, Mattis’ support has been invaluable.

Mattis’ resignation letter underlines serious disagreements with Trump. It rebukes the president for failing to service US alliances, while being confused about America’s enemies. If that causes Trump to choose a more pliable successor, the Pentagon’s attention could go off India.

I think relations between two democracies go beyond individuals.
Yes, indivduals give a push to sort out some knotty problems, beyond that the large strategic interests matter.
India US relationship have survived many govts on both sides. Will grow.

India has bought and will buy more weapons, but there could some red lines like fighters that will take time to happen.

I personally think we should buy another 36 Rafales off the shelf and manufacture F 16, it is good enough for our neighborhood.
Being single seat, cheaper to operate and will complement Tejas very nicely. This should allow us to buy F 35 for navy.
US technology is also most proven for Naval helicopters.

India has given up dogmatic non aligned policy to a more balanced approach now. It is now a mature one.